Dinah mentioned the recent Finnish study, showing an associated protective effect of antidepressants on death and on completed suicides, but an associated increase in the number of suicide attempts. I thought I'd share, for teaching purposes (and thus subject to Fair Use), the data in the article on individual medications.

For those unskilled in looking at Relative Risks, an RR of 1.0 indicates no higher or lower risk of the outcome being measured (compared with the comparitive population... in this case, suicide survivors not on meds). An RR or 0.5 would indicate a risk that is half of expected, and an RR of, say 2.0, indicates a doubling of the risk. (Note that this is intended for a professional audience... these data should not be applied to one's own personal situation and you should discuss it with your physician if you have any questions.) 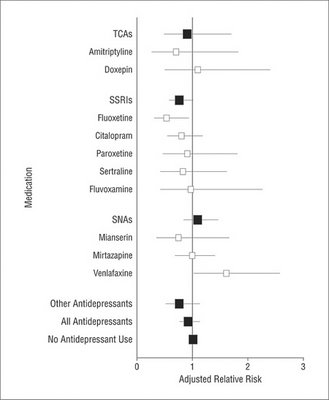 Figure 1. Relative risk and 95% confidence interval of suicides obtained by using medication as a time-dependent variable. The relative risks were adjusted with the propensity score method, and by including sex, age, geographical location (as strata), number of suicide attempts before the index hospitalization, number of suicide attempts during follow-up, use of multiple antidepressant medications, and number of purchased antidepressant prescriptions during the previous year in the model. SNA indicates serotonergic-noradrenergic antidepressant; SSRI, selective serotonin reuptake inhibitor; and TCA, tricyclic antidepressant. Citalopram was given as citalopram hydrobromide; doxepin, as doxepin hydrochloride; fluvoxamine, as fluvoxamine maleate; mianserin, as mianserin hydrochloride; paroxetine, as paroxetine hydrochloride; and venlafaxine, as venlafaxine hydrochloride. From: Tiihonen: Arch Gen Psychiatry, Volume 63(12).December 2006.1358–1367 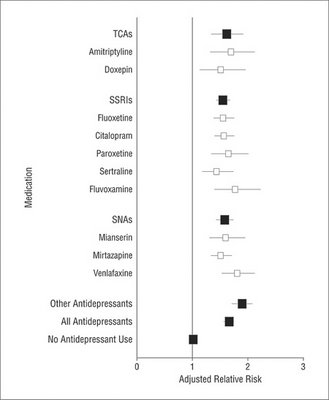 This one shows that anyone put on meds was more likely to have attempts (keep in mind these pts were not randomized, so it may be that those who were not placed on meds had a lower risk of future attempts). 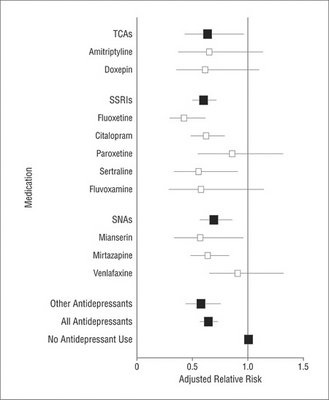 This one shows that there was clearly a reduction in the relative risk of death for pts on fluoxetine, citalopram (Celexa), sertraline (Zoloft), mianserin (not in US), mirtazapine (Remeron), and "other antidepressants". None were associated with an increased risk of death.

The authors suggest that the antidepressants, especially SSRIs, may have a protective cardiovascular effect, possibly due to their mild blood-thinning effect.

Take a look at other bloggers' posts on this article:
Corpus Callosum
Armenian Medical Network
Gooznews (this one's actually on the FDA hearing, but makes some good points on conflict of interest)

I'll be at the FDA hearing later today and will report about what I heard in a follow-up post...
Posted by Steve & Barb on Wednesday, December 13, 2006

Okay, my gut says that the everyone with Major Depression (and therefore a chance of relapse) got put on meds, so the increased risk of suicide was due to a relapse in illness, not an effect of the meds. Maybe, not really, because these folks looked at who actually was taking the meds at the time of attempts subsequent to the index event (the initial hospitalized attempt that got folks into the study), so the risk of ATTEMPTING suicide is lower if either 1) you weren't prescribed meds or 2) you were prescribed 'em but didn't fill your prescription. My guess is that some people stop the meds because they are no longer depressed, and those still taking the meds are more likely to be people who feel badly; this is all very complicated. Nothing about this study says the SSRI's CAUSE suicidal behavior. And nothing about this study says SSRI's don't cause sucidal behavior. And why did they look at so many meds but not Bupropion??? (Wellbutrin).

Interesting in that fluoxetine is looked at as Mr. Bad of the SRIs. The data may reflect that it is easy to get the dose right for efficacy so that the (disturbing side effect)/efficacy ratio gives the drug an overall good outcome. The society has kind of a boderline personality attitude toward drugs, overidealization potentially followed by denigration which doesn't aknowledge that the hypothesized illness treated is not benign. For Effexor the problem is that, though it can be just the drug, if it doesn't work, it should be stopped because it is like a tca in overdose.

Hi Michael & welcome as a Shrink Rap commenter.
Interestingly, fluoxetine is the only med proven to work in childhood depression (sorry, no ref, I may have heard it in Grand Rounds--not blog, real life academic center).
Clinically, I believe meds should be pushed to either their maximum tolerated &/or safe dose, held their for 6-8 weeks, and if they aren't clearly working, stopped. If they are helping, but the patient remains symptomatic, they should be augmented. Patients shouldn't be kept indefinately on meds that aren't helping them, and sometimes this does get lost in the polypharmacy laundry we've come to depend on.
Just my thoughts.

Heh, thanks Dinah. I've used 'michael' or my blog name depending on what kind of hurry-defaults of the comment system come up. Happy to see about the revisions to the labeling. As I commented in more detail in 'Dr. Helen' when she had a recent blogpost on adolescent suicide, there is evidence that the original warning was really due to the admistrative power of Joe Barton (R-Tx) who was head of the committe that determined funding at the FDA. I can repeat myself here if anybody is all that interested. Of course, this, in my view, political event is misunderstood by 'Seabear,' cf. another recent post in Shrink Rap, and others.

That wasn't hard was it. Connect through the link J' Accuse Congressman Barton, pardon my French here, remarks in English at 7:12 PM in the Comments.