Now that Dinah's gone for a week I will take this opportunity to blog about all things corrections-related until she posts a comment begging me to stop. Oh wait, I do that anyway.

When I go on vacation one of the things I really enjoy is to visit historic old prisons. (Yes I know that sounds odd, but think about this---Eastern State Prison had 50,000 visitors in one year after it was turned into a museum.) There are six correctional facilities that have been designated as National Historic Landmarks. I've been to a couple and I thought I'd write about some of the others.

Located at the site of an old copper mine, Newgate Prison (originally called Simsbury Prison) was the first penitentiary in America. During the American Revolution it was used to house Tory sympathizers---the Guantanamo Bay of its time. Inmates were kept 70 feet underground, in the various nooks and crannies of the mine shaft. In spite of the fact that all the exits were sealed there were a surprising number of escapes from the prison, and it was the site of the first mass escape in American history. Fans of the show Prison Break might enjoy reading about the ingenuity of the plans laid by these early prisoners on the American Heritage web site.

George Washington used Newgate to get rid of his troublemakers, as documented in the text of one of his letters:

Gentn.: The prisoners which will be delivered you with this, having been tried by a Court Martial, and deemed to be such flagrant and attrocious villains that they cannot by any means be set at large or confined in any place near this Camp, were sentenced to be sent to Symsbury in Connecticut; you will therefore be pleased to have them secured in your Jail … so that they cannot possibly make their escape … I am, &c
George Washington

You can visit and take tours there from May to October.

The Walnut Street Jail doesn't exist anymore, but its former location is marked by a plaque at the corner of Walnut and Sixth Street in Philadelphia. It was the first American jail. It was unusual because it was the first correctional facility to classify inmates according to offenses, and to house them accordingly. During Colonial times the Quakers used the jail to model a theory of rehabilitation known as the Pennsylvania System. Under this system offenders were kept in continuous solitary confinement with little chance to interact with one another. The theory was that this would automatically lead to introspection, penitence and reformation. Thus, the idea of the penitentiary was born. As harsh as this sounds, it was actually humane for its time since the Quakers---chief among them Benjamin Rush and Ben Franklin---called for the use of this method of reformation rather than the use of capital punishment for anything other than murder.

During the Revolution the jail was used by the British to house American prisoners of war in occupied Philadelphia. The Pennsylvania Prison Society has a nice history of the jail with more detail.

One other piece of historical trivia---the jail was the site of the first air flight in the United States. On January 19, 1793, a fellow by the name of Jean-Pierre Blanchard took off from the jail yard in a hydrogen balloon and later landed in New Jersey. George Washington witnessed the takeoff.

This is one of the prisons I've visited, and let me tell you it doesn't look like a place I'd mind being in if I had to be locked up! Located on the island of Maui, it was designated the Hawaii State Prison in 1852. As the whaling industry increased the rate of crime increased as well. The museum has posted a list of the crimes that inmates were convicted of, like "furious riding" (the nineteenth century equivalent of drunk driving) and "bastardy" (I'm not going to guess at that one!).

Although the cells were small and barren, the prison yard itself is fairly luxurious. It was hardly a punitive environment. The museum displays an excerpt from the diary of one prisoner, a sixteen year old sailor:

"No restrictions are placed on the use of cards or tobacco...and any sedate individual could therefore lay back all day with a pipe in his mouth and enjoy himself at a game of euchre as well as though he was comfortably stowed away in a beer house."

The prison was eventually closed when the death of the whaling industry essentially eliminated most of the local criminal activity. 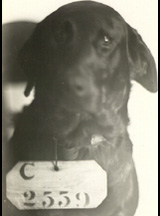 In 1924 the Governor of Pennsylvania sent his dog, Pep, to the Eastern State Penitentiary for allegedly killing his wife's cat. The "cat-murdering dog" was even given an inmate number: C2559. No word yet on any book or movie deals.
Posted by ClinkShrink on Wednesday, December 27, 2006

I loved this post! Perhaps that's because there is so much here that relates to what I know and love: Philadelphia! (I'm probably one of the very few who live and work in this city who actually say they love it...that may become pathological! *grin* )

I've actually never been to Eastern State, although I hear advertisements for tours there all the time on the radio. Having just clicked on the site, I want to browse around now and maybe visit when they reopen in the spring or summer... I said before that I wanted to go check out the Walnut Street Jail. I can't believe this one - I walked by that every single day. I lived in an apartment at the corner of 10th and Walnut for a year! I took walks nearly every day on Chestnut down to Penn's Landing and then back Walnut, which means I've walked by this site hundreds of times...and never realized it was this historic jail site.

My family was just in Philadelphia today to see "Chicago" (which was amazing!) and I take such pride in our city. I love telling them what all the sites are. I loved living right in the middle of the historic section - and having an ancestor who signed the declaration, meaning I've stood in the very same places that his feet stood - but 3 centuries ago. That's a totally awesome thought.

Of course, we have scored nearly a record number of murders this year (over 400 so far, and the last time we had this many was in 1997 when there were something like 417) - so we may have a need for jails and prisons more than ever before! Heh...

Hope Max doesn't see that last picture on there - he might get worried based on principle alone!

Okay, Hi From Los Angeles (or an outlying beach town). We're having fun and for the record of my recent travels:

Two weeks ago I was in Philly (and I really like Philly, much more a real city than Baltimore) for a party at Lucky Strike (yup, a bowling alley). We walked by the Walnut Street Jail and thought of Clink.

Three days ago, I was in Simsbury, right near the Newgate Prison. Again, I resisted the urge to visit. My husband has toured it as a child and says "the torture techniques are pretty cool".

I believe I've been to Eastern State Asylum (it's in Williamsburg, right) and did drag the family.

Yesterday, I saw Dream Girls in Hollywood, sort of Karma with Fat Doctor who was supposed to see it but didn't. Today, my crew insisted a ride at Universal Studios wouldn't be too scary. Sigh..... ("You went on a big people ride, Mom, put it on the blog," ....said teenage son.

Max, sadly, is in prison for the week.

Very interesting post. I didn't know so many prisons offered tours. I think it would be cool to see one. Since I'm hoping never to see the inside of a prison using the justice system, this may be my only way to see what it's like inside the slammer. I don't live that far from Philly, so it might be a fun trip to do this summer.

Dinah...how funny that we both are from the same general area (I'm in DC) and now vacationing in the same general area. I'm also in one of the LA beach cities right now (where I grew up). I definitely like the weather better!!! Hope you enjoy the rest of your trip in LA. I'm crossing my fingers that DC gets the worst weather of the winter while I'm gone. A girl can dream!

I know where Lucky Strike is! You were in Philly and didn't tell me.... *pout* Maybe someday we could meet and have lunch! I promise I'm not nuts... LOL I have to go to Philly tomorrow for the psychiatry appt at Penn and then an orthopedic appt at Rothman. I was originally going to take the train so that I could read my book or watch episodes of Gray's Anatomy on my ipod, but I have to be back by a certain time to have lunch with my friend. (I only have a long commute for now because I'm out at my parents' house in the West Chester area.) So I'll have to drive in and pay high prices for stupid parking garages and fight dumb traffic on the Schuylkill and 202 (can you tell I hate my commute?) instead of a nice little trip on the train and the happy excited feeling I get when in 30th street station and I momentarily consider hopping a train to New York City to start my performing career.

Check out the nursing blog carnival I just posted... Change of Shift Volume 1, Number 14 on my blog. BTW....am I ever gonna earn a link? LOL

Happy New Year! Hope LA is nice - my aunt used to live in Santa Monica, and I loved it out there. My mom and I woke up early one morning and got a huge blueberry muffin and sat down by the beach to eat it - very peaceful (and yummy!) memory! :)

Hey, Carrie, they actually comment on YOUR blog; that's more than they do for me, lol.

I miss the east coast sometimes and its history; I remember Philadelphia, from a child's point of view, anyway.

I miss all the Revolutionary and Civil War era stuff.

Sometimes I get sick of pioneer this, and pioneer that, out here, lol.

I don't think I could tour a prison; I had a hard time working up at Primary Children's Hospital for a couple weeks, once, and knowing all the suffering that was going on. Not that I think people are wierd for touring prisons; just that I couldn't I don't think.

Although I did enjoy seeing Adam and Jamie (Mythbusters) bust out of Alcatraz.

Fascinating post. I love reading the history of some of these places. Some of the earlier settlement prisons are interesting too although the last one I visited had a room full of bottled snakes and spiders which ended my tour pretty quickly.