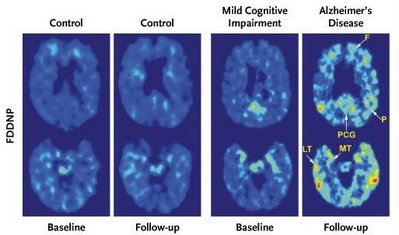 Two interesting new research pieces came out this past week or so on aging and dementia.

First, this piece about a gene which is found more often in folks who live 100 years, suggesting that people with the val-val variant of the CETP gene (cholesteryl ester transfer protein) may have a better shot at living a longer life. Centenarians with this genetic variant were also five times less likely to have dementia. The gene, found on Chromosome 16 (OMIM), produces a protein involved in lipid metabolism which results in larger, less sticky, cholesterol particles. The article came out in today's Neurology.

I looked in PubMed for similar articles from this author (Barzilai) and found this April 2006 article in PLoS Biology looking at several longevity-related genes in this same population. This article describes two genes which are more prevelant in really old people: the val/val (also known as I405V) variant of CETP and the -641C variant of the APOC3 gene (another one that deals with lipids).

Here's what's really cool. This guy has gathered this big group of centenarians and is doing genome-wide scans to determine which genes may be associated with longer (and healthier) lives. This work comes out of Albert Einstein's Institute for Aging Research.

The second item is the NEJM article, from Gary Small at the UCLA Center on Aging, which showed that a molecule (FDDNP) binds to the amyloid plaques and tau protein tangles which are characteristic for Alzheimer's disease. After an injection of this experimental tracer chemical, a PET scan can then show where this stuff is in the brain. If there's enough of it, and in the right places, chances are good that you have (or are developing) Alzheimer's dementia.

This is just a research tool, at the moment. Neither this imaging tool, nor the above genetic tests, can be used clinically in the assessment of dementia risk or diagnosis. Maybe one day.

I know this is a bit hypochondriacal perhaps, but sometimes I wonder about the fact that I already have 9 (at last MRI done in January 2004) non-specific WMLs on my brain MRI...which was an increase from an MRI done in 2001. I also have increasing memory and concentration problems as well as this constant trouble with the migraines. I sometimes wonder if this is a sign of future memory/brain problems to come - so far, nobody in my family has suffered from Alzheimers, and I'm very fortunate for that - but with my scans (my dad's also show the WMLs), I do sometimes worry. I know they don't really know the connection to WMLs and all these diseases, but I remember one of my scans saying it depicted the lesions as possible atypical demyelinating processes going on. I do wonder if my cognitive problems are simply a factor of pain/medication or if they may relate to some physical brain changes.

Guess time will tell...and there's really no point in worrying about something that you can't change! Just don't want to be one of those early Alz types in my 3rd or 4th decade with my brain going byebye! Oh - I did forget to add that a CT scan I had last year had a report that read "Mild Volume Loss Evident" - okay....so I'm already losing some volume, too - all that makes me think of is liquefactive necrosis which just makes me think of the migraine actually eating away at my brain and causing it to shrink, thereby causing the cognitive problems.

You're doing a good job. I saw the brain pics, and I knew who was posting....