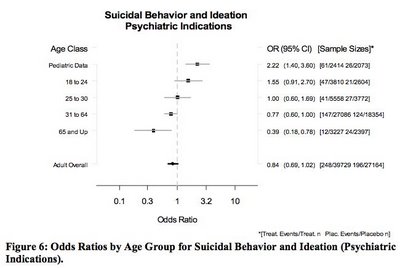 I attended yesterday's hearing, missing the FDA's presentation in the morning, but arriving for the public comments part and the afternoon deliberations. (Check out the FDA's 150-page .pdf testimony.) I was also among the 75 people who provided testimony to the committee. The meeting lasted a total of 9.5 hours!

This is the first time I've been to an FDA Advisory Committee meeting. These are public meetings (required to be public, by law) in which the committee members discuss the issues and make decisions. The FDA presents data to them; in this case, it was data from numerous clinical trials solicited from big pharma to especially get at the question of induction of suicidal thoughts or behaviors by antidepressant medications. After the committee hears these data, they listen to public testimony. After that, they discuss what they heard, and respond to the FDA's recommendations in the form of support, opposition, or other recommendations.

In this post, I will first cut to the chase and tell you what the committee's recommendations were. In a second post, I'll give you more details to flesh out some of the discussion points and concerns that the committee raised, and also discuss the public testimony, some of it being very gut-wrenching and impassioned.

If I had to choose one image that best describes the entire hearing, it is the one above.

What this demonstrates is that as age goes up, the relative risk of suicidal thoughts or behavior goes down. The numbers plotted are the Odds Ratios... meaning that, compared to the folks taking placebo, what are the odds that those taking antidepressants are likely to have either thoughts of suicide or actual suicidal behavior. So, an O.R.=1 means that the chances are the same, which means no difference. An O.R.=2 means your chance is doubled. An O.R.=0.5 means your chance is halved. The black square is the estimated O.R., and the gray bar represents the 95% Confidence Interval... meaning that the statistical probability of the true O.R. being within the gray bar is 95%. Thus, if the gray bar touches 1 (the vertical dashed line), then the two groups (placebo and medication) are NOT statistically significant. If they do not touch 1, then they ARE statistically significant. Got it? To put it most simply, left of the dashed line is good, right of the line is bad.

So, the pediatric Odds Ratio does not include 1; this result supports the decision made in 2004 to add a black box warning that says these medications are associated with an increase in suicidal thoughts or behavior. (As it turns out, it is just thoughts, not behavior, but I'll address that in the second post.)

The 31-64 year-old Odds Ratio just includes 1, but the estimated O.R. is less than 1, meaning that we cannot say there is a decreased risk, but there almost is.

Okay, so here is what the committee decided:

Also, with respect to the statistics, if they had used a 1-tailed hypothesis, it would have made more of their results significant. Admittedly, the 2-tailed hypothesis is the more conservative way to go, and probably more appropriate, but I was thinking about it. I was tempted to go back through and recalculate the statistics, but then I recovered my sanity.

However, one cannot differentiate between the people that have decreased suicidal ideation from antidepressant use alone, or merely from the maturity and perspective that comes from getting older.

My former shrink said I would probaby "outgrow" the borderline personality disorder by 40. I assume I would "outgrow" the chronic suicidality that comes with that DX as well.

This is all interesting information, but a bit intimidating for your non-shrink readers, it's not that we aren't interested.

PS Dr. McShrinky asked me if I "missed" being suicidal last time I saw him. The lithium at first got rid of the thoughts completely, but even though they are back, the urgency/intensity isn't.

I have a couple of thoughts about the age-related findings.

One is that antidepressants typically relieve the physical depression before the mental depression. (Back in the day I would have been authoritatively wielding the correct terminology, but I’ve plumb forgot and I just have to hope you get what I mean with my vague gesticulations.) A common effect of antidepressant treatment is that someone who was too depressed to kill themselves can start making concrete plans. While this happens to some degree to most people pulling out of a depression, with or without antidepressants, it seems to be more pronounced with. Perhaps young people on antidepressants experience a particularly sharp mismatch between ability and mood; or perhaps their inexperience managing their moods and lack of perspective makes them react particularly strongly.

Alternatively, perhaps young depressed people and old depressed people are different populations. I understand that depression in young people is more likely to be related to a bipolar disorder. Depression in old people can plausibly be related to simply wearing out. People with bipolar disorder can flip into mania on antidepressants, though SSRIs seem to be relatively safe. And flipping into “agitated depression,” or that mixed state where life is not worth living but you can’t sit still, puts one at high risk for suicide.

If it’s the latter scenario, then age is just serving as a proxy for bipolar disorder.

I expect that all explanations are true simultaneously; this will be an interesting area for research.

How's about you nominate ShrinkRap for a Medical Blog Award?

Welcome to the third annual Medical Weblog Awards! These awards are designed to honor the very best in the medical blogosphere, and to highlight the diverse world of medical blogs.

The categories for this year's awards will be:


Nominations are now accepted in the comment section of this post. When nominating, please indicate blog's name and URL. A blog can participate in more than one category, so please indicate which one(s).

The following timeline will be observed:

Call me skeptical, but I am concerned that the FDA accepted data for this analysis from the drug manufacturers without checking it. Healy has shown drug company suicide data in the past to be distorted, as suicides/suicide attempts on placebo washout were inappropriately assigned to placebo. You can read my post for more details. It's possible that the data FDA analyzed were accurate, but I think there were, at the least, some coding procedures that favored medication over placebo in terms of safety.

Any who has studied this topic in depth can tell you that anti-depressant drugs can actually create suicidal thoughts and BEHAVIOR!!! Thoughts that never existed before the patient took the antidepressants drug. Hello, lets be realistic, and stop being brainwashed by the money hungery drug companies and the FDA. These two establishments has been working side by side for years, they play golf together and talk about how they can sell more drugs to increase profits. They are not interested in a cure to depression, they want to sell drugs and make money. FDA scientific research discovered the danagers of these drugs in the early 90's, but the finding were only hidden by the FDA to protect profits. Yes the government too profits tremendously off pharmasuticals. My sister was a genuine happy person her entire life. After graduating college she became restless and was experiencing early signs of depression. Her doctor prescribed her to paxil. After taking the drug for a week my sister took her own life at age 23. My sister would still be alive today if she had never taken this antidepressant. And this is not a isolated inncodent, it is very widespread. To all readers I suggest you do further research on this topic. And face the reality that the FDA and there good friend at Glaxosmithklien and the like do not care about their customers health, or lives for that matter, but they put profits first. Yes greed is an evil thing.