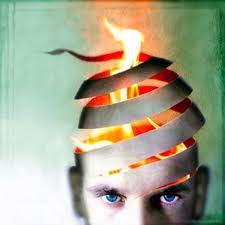 He feels like a prisoner in Brooklyn, while back home the monsoons are causing devastating floods. Paul believes that his problems could be fixed by better communication. Tell your son you want to move. Sunil is frustrated in his attempts to get Paul to understand his life. He can't leave, can't go home, and must stay put in his son's residence. Paul thinks Sunil could get a job and move into his own apartment. To make matters worse, Paul insists on talking about Sunil's dream, and Sunil gets outraged when Paul concludes that a character in the dream is the former girlfriend, despite Sunil's protests. So what else is new?

Sunil is convinced that his daughter-in-law is having and affair, and that she is mocking him-- something he finds humiliating. He is enraged and wants to smother her, or perhaps her laughter. He tries her bedroom door, and thinks of calling Paul in the middle of the night.

Paul is clearly worried, and he says so. He doesn't ever ask outright if Sunil is thinking of killing Julia. He talks to Sunil about what stress he is under, and just as I think he's going to suggest that Sunil go into the hospital, he recommends he come twice a week for therapy. It's certainly understandable that Paul would want to keep closer tabs on Sunil, but is digging deeper a good idea? The patient seems to be unraveling, and Paul tends to find the strands then pull and pull.
Posted by Dinah on Monday, November 22, 2010

and just as I think he's going to suggest that Sunil go into the hospital, he recommends he come twice a week for therapy.

Interesting point Dinah. At what point do you make the decision to hospitalize someone versus up the number of sessions... Ah the joys of 'reality' tv.

Can you say TARASOFF LETTER?