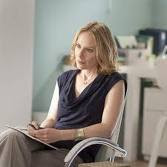 Paul gets up and walks around the room. Adele wants him to sit. He doesn't, at least not at first. He tells her a little about his patient, "You know what's going on here, it's perfectly obvious." But she doesn't. He wants her suggestions and Adele doesn't want to be both therapist and supervisor.

Paul talks about Max (his son, not my dog). He makes a lot of assumptions about....everything. Adele sums up the session by telling Paul that he has been pushing her to take care of him. She cites the evidence to prove her case.

Adele is the consummate shrink here. She nails it. I think this tv episode, idealized and compacted as it must be for tv, could be a training video for psychiatric residents (and even some oldsters). It's no accident that Adele is paired with Jesse. The mother nurturing issue, the parentified Paul, and Jesse, the desperate to be loved and cared for, are Paul's current longings after so many losses. Paul is at his best with Jesse even though he doubts his competence with him. He is doubting his ability to nurture as he himself wants to be nurtured, and Adele handles the transference beautifully. I've treated older patients but I would have a hard time treating a colleague.

Snickers,
I agree. Adele is a much better therapist than Paul. And much more realistic.
She listens to what Paul says, she asks him poignant questions, she doesn't get ruffled, and she moves with Paul---she doesn't get in his face, she distills his feelings and rebounds them back, and she says kind and reassuring things to him.
She is skillful at staying out of the battles he tries to provoke.

Consummate? Her demeanor in the first sessions was stiff and lacking in warmth. Here, she leans in, she meets him more.

Real life therapy, however, isn't entertainment. One of them has to be confrontational to make it worth a TV drama series.

Completely unrelated but perhaps a relief to any who have been concerned: I get to see my psychiatrist again!

Blog post about it with her email to me

<3 Adele. Just found this blog today morning and I've been addicted to it. As a psych major, it's a relief to finally find a blog with interesting info rather than random Jungian non-sense