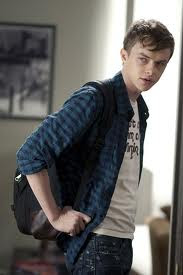 Jesse brings his mother to the session, but he doesn't want it known that he wanted her to come. Jesse continues to alternate between being a gentle, vulnerable boy and being a provocative, hurtful monster. He tells his mother about the sexual event, in all it's glorious detail, that got him beaten up and suspended from school, and just in case that's not enough, he announces that his birth mother wants him back. Mom gets upset and leaves the room. Paul asks her to stay. Why does he do that? When someone says "enough" or "I need space," maybe it makes sense to listen.

Paul tells Jesse he's creative, an artist. I like that, he's saying something to build the kid up. He tells Jesse that his own son is an artist and that sometimes he doesn't understand him and feels distant. Is this the right thing to do? At first it seemed kind, like an attempt to connect with Jesse, but for a moment I wondered who was the patient. The revelation doesn't seem to have an impact on Jesse, who is drowning in his own complicated life and problems. He wants so much to be loved and valued as he pushes the world away.

Paul asks Jesse if he's heard from, or contacted his birth mother, and Jesse abruptly stands and leaves. Paul follows him to the door, not just to say goodbye, but to continue the session as Jesse is trying to end. And Mom, who Jesse had believed would leave, is still in the waiting room.
Posted by Dinah on Wednesday, November 10, 2010

I often wonder what would happen if I walked out in the middle of a session. Would my t ask me to stay, would he come after me?

Sorry for my off topic post but I heard an old segment on NPR about In Treatment. Now I wish I had HBO.