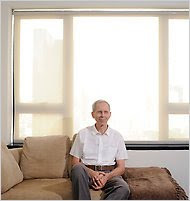 Cut and Paste. I don't know what to say. Oh my.
In tomorrow's New York Times, Lisa Miller will write "Remembrances of Lives Past"

IN one of his past lives, Dr. Paul DeBell believes, he was a caveman. The gray-haired Cornell-trained psychiatrist has a gentle, serious manner, and his appearance, together with the generic shrink décor of his office — leather couch, granite-topped coffee table — makes this pronouncement seem particularly jarring.

In that earlier incarnation, “I was going along, going along, going along, and I got eaten,” said Dr. DeBell, who has a private practice on the Upper East Side where he specializes in hypnotizing those hoping to retrieve memories of past lives. Dr. DeBell likes to reflect on how previous lives can alter one’s sense of self. He, for example, is more than a psychiatrist in 21st-century Manhattan; he believes he is an eternal soul who also inhabited the body of a Tibetan monk and a conscientious German who refused to betray his Jewish neighbors in the Holocaust.

Belief in reincarnation, he said, “allows you to experience history as yours. It gives you a different sense of what it means to be human.”

I'd comment, but I don't know what to say.

I think that somebody needs to check his meds!! :-)

I think he's taking advantage of people who might need a conventional psychiatrist . . .

I'm fairly certain that I was an American Crow in a past life. Pretty sure. Of course, I wouldn't tell a patient this...blank slate and all.

This makes me really angry. When you consider how desperate and how sick some people are, how they may never consult a shrink again if they deal with a flake and how wicked it is to inflict one's own delusions on vulnerable people and charge them money for it. I'd better go back to my blog and tell them how I really feel...

So why is it that whenever I read accounts such as these, the past lives are never really shameful ones? Where are all the I was a Nazi in a part life or I was a mass murderer or I was donkey? And if we are on some karmic wheel, why do the past lives seem better than the ones people are living now? Uh, not that there is anything wrong with being a shrink but do all the hours of residency, all the insurance form hassles really compare with with living under a Nazi regime and not betraying your Jewish neighbour? (Hmmm, I dunno there has to be a scale of virtue. Not betraying vs actively protecting. He prolly coulda done more if he wants to lay claim to a super amazing past life.)

Few people, of any age or state of health, want to even consider their own death. All of us, however, realize that death is inevitable. Consider its definitions: death is only the end of this life and the demise of this body. Unless you believe it is The End, death is also the threshold of a new beginning. How many possibilities follow this life? Few people have been so good that they have earned eternal paradise; fewer want to go to a place where they must receive punishments for their sins. Those who do believe in resurrection of their body hope that it will be not be in its final form. Few people really want to continue to be born again and live more human lives; fewer want to be reborn in a non-human form. If you are not quite certain you want to seek divine oneness, consider the alternatives. Lives are different; why not afterlives? Beliefs might become true.

This short life is just a speck in time; it is important to us because it now seems to be our speck. Look beyond yesterday, today and tomorrow, beyond Earth’s 4.5 billion years: consider eternity.

(from my e-book at www.suprarational.org on comparative mysticism)

I think he is either a fraud or schizotypal.

Caveman fantasy seems pretty popular amongst old professional / desk bound guys. I suppose a part of himself wishes for a free life away from alarm clocks and appointments and making rounds or seeing patients or whatever. Thus the caveman fantasy, which he erroneously believes is a "past life" he really lived.

When I was small I believed I was japanese in my past life. I had felt this way ever since I was 6 years old or so. I never knew why. I used to really think I could remember being in a field collecting crops and such.
When I was in my early 20s I read the book "highly sensitive person" and I realized the reason I always felt japanese "in a past life" is because japanese culture speaks to my personality traits: shy, sensitive, careful aesthetic minded children are rewarded in japanese culture. My brain just jumbled this all up and convinced me that I must have been japanese a few decades ago.

I also felt I was a cat in a past life, and ALWAYS pretended to be a cat when I was small. Again, cats are solitary, very mindful of their environment, self sufficient, graceful/aesthetic, and all traits I related to.

Its unfortunate a Cornell trained psychiatrist is totally incapable of that level of insight of a 20 year old.

As stated, he would realize the caveman fantasy is actually pretty popular amongst men his age, there are actually some men out there who live a "paleo" lifestyle and like to fanatasize they are getting back to their roots and stuff. It all comes from a longing for a free life when you've so many ties to wear and appointments to keep and you're one foot in the grave as well. He's just totally confabulating that past life nonsense and it is COMPLETELY inappropriate for him to do so given his profession. I have to assume there is a fair bit of purposefulness in this, it is so wreckless of him to speak this way given his responsibilities.

Anonymous #3, the concepts of reincarnation and karma, at least in a Buddhist sense, do not mean that you get in your next life what you "deserve" from your actions in your previous lives---i.e., quid pro quo. We're all seeing the effects of karma here and now; you don't have to wait until the next life to get paid back. Eventually even the person with the best karma and the most merit will have a life good enough to exhaust the previously accumulated merit, and the person goes back to zero.

I don't know what particular "flavor" of reincarnation this doctor believes in, but in Buddhism, having an apparently better previous life doesn't mean you did something to deserve a bad life now or that it speaks to your bad character now; it just means that we're all in an endless cycle of death and rebirth. (And you don't have to believe in reincarnation to be a Buddhist. I'm just saying that that's one way of thinking that would answer your question.)

Also, I don't think there's a scale of virtue. Either you approach the world from moment to moment in a conscientious and helpful way, or you don't. We have no way of knowing how virtuous this fellow is compared to someone who helped Nazis or to a Righteous Gentile.

But I'm just speaking hypothetically here. I never heard of this man before today.

Lu,
Chill. Have a bowl of granola. I wasn't being serious.

Gosh, you're nice, Anonymous. Thanks for taking the time. Namaste to you, too, dudebro.

The topic of past lives is like most other religious topics: impossible to conclusively prove or disprove. It's not accurate to call it a delusion, because that implies that there is proof that he didn't really have any past lives.
If it's helping people and not harming them, I don't see the problem. If you don't believe in reincarnation, it's easy enough to say "yea, but THEY'RE wrong" but if they think you're wrong and you think they're wrong and neither side can actually be proven right, it's silly to get any more upset about someone using one religion to help people than someone using another. There are plenty of therapists who incorporate Christian principles and faith into therapy-- are they wrong too?