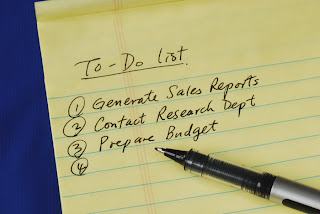 Dinah has Monday off but this is the weekend, and the weekend is the time to Get Things Done. It's time to tackle The List.

I have lists for everything: grocery shopping, personal errands, work-from-home assignments, travel (all types---climbing vacations, hiking, biking, beach and conference), even hobby activities. I know I'm not alone---Dinah has a mental "to do" list, and even keeps them for her friends (ask me how I know!).

The advantage of listkeeping is that you are less likely to forget something, which means that you avoid embarrassment and people getting annoyed with you. A good list keeps anxiety at bay when you're swamped with responsibilities and keeps you focussed on the next task at hand instead of running around like a scattered person. You can work more efficiently when you can organize errands according to location or time of day.

There are a few bad things too: a certain amount of anxiety is necessary to actually get started on a task. With a list, you're temped to think, "I've got that covered---it's on the list," but then you never actually do it. When the list gets too short (that actually does happen sometimes! I get caught up.) then the list disappears and duties get lost.

The other problem is that task begets task. You cross off one task, but that leads to another: you make the phone call, but the conversation leads to a new task. The List becomes an unending series of responsibility, which is rather demoralizing.

Task management is a psychological issue. Some people never make a list and live 'on the fly', some people make lists occasionally, a few rare people start the day by running the list.

And no Dinah, you can't have access to my list. I put enough stuff on there myself.
Posted by ClinkShrink on Saturday, August 21, 2010

I discovered my Apple computer has a program called "Stickies" which look like Post-it notes that I use to make to-do lists that I see as soon as I log on, and stay posted while I am on unless I close it. I have made mine very narrow along the left so they don't get in my way. That list is where I write the bigger more important things I have to do. I use paper to-do lists for shopping and errands because I can organize my running around more easily that way. I get more done when I use to-do lists, but I am only a part-time list maker. When I don't make them, I don't get as much done, but also don't want to do it either. The presence of a list is an indicator of my dedication to accomplishing things.

I live by my moleskine list. I transfer the old stuff to a new list every 10 days or so, so it's basically a notebook full of lists.

And then there's compulsive, obsessive list-making, where you think that if you can just create the "right" kind of list, you can create the "right" kind of order, the "right" kind of "system" to put the chaos that is whirling into your head down on paper in a neat little (or usually long) orderly "LIST", that somehow you will have corralled the beast and have contained the overwhelming fears and chaos and you'll have found a way to deal with the things going on around you, so at times you spend HOUR AFTER HOUR on such lists . . .

I don't do this very often anymore. I even have become pretty successful at staying away from Kaboodle, which is, at heart, an online way of making lists. I have several THOUSAND types of CHAIRS and SEATING in one or two of my lists, listed by type or style . . . . I had spent many a day and night, trapped for over 24 hours, even 36, at my computer, categorizing things I found on the internet, in Kaboodle. Not just seating, I don't even have a huge interest in that type of thing, just a passing one.

Just look up sarebear on Kaboodle, and you'll see the, er, extent of my OCD at times.

It's the times I spent trapped at my computer for hours and even days, that are the worst. When I used it for half an hour here or there, it was harmless.

There's a link to my lists. Hope I stay away from it though, lol. Or at least from the unhealthy usage of it, if I use it in a hobby way, ie, a few minutes here and there it is fine.

I present the lists not to be judged, which I potentially might be, but to illustrate how, er, extreme such uh . . . behavior can get, sometimes. Not that I came up with all that stuff all at once, it WAS over time.

Then again, with 1-3 day sessions sometimes (with potty breaks) sometimes hundreds of items would get added at once. And I'd feel wasted and useless once the compulsion would release me, because of course in those hours I'd spent doing it, nothing real at all had been accomplished.

List heaven: Google has a Task list I can even access from my phone when I'm at the store and need to know the model number of the battery for my dog's infrared-door-opener collar gadget. I even have recurring tasks, like publishing the newsletter and cutting the grass, on it, so I can be sure everything never gets done. (Did that make sense?)

Whenever someone mentions lists these days, i always think of "The Fabulous Beekman Boys"...i love them and their tv show....does anyone else out there watch it? Highly reccomended!!


"Did you remember to bring a copy of the list I made for you?"

For me, if only a list were just a list . . . it starts off so innocently, and then it just snowballs into HELL.

" Do i have to leave you another copy of the list?"

" This is the last thing to do on the list."

Gotta love you Josh, for loving that Brent!

"We make farming fabulous"....and they do!