Too Much Duckiness to Ignore. 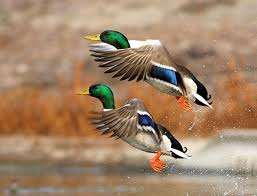 Let the facts of the case present themselves:

In the early pre-dawn morning (approximately 4:00 a. m.) of June 18, 1972, the windshield of the automobile which appellant was driving along North Columbia Boulevard in Town X, suddenly shattered causing a splinter of glass to enter Smith's right eye, which resulted in permanent impairment of sight in that eye. Investigation proved that the cause of this unfortunate mishap was that Smith's car had struck an airborne mallard duck or conversely that the mallard had struck Smith's car. The rationale for this conclusion was the finding of the body of a deceased mallard at the scene of the accident and duck feathers and other parts inside car. The question of negligence, or the degree thereof, attributable to the only participants involved in the accident, namely, the mallard and Smith, is not before us.

The scene of the accident was that portion of North Columbia somewhat adjacent to the plant of defendant-appellee, Malarkey Company (Malarkey). Since Smith is a citizen of Washington, Malarkey is an Oregon corporation and the amount in controversy exceeds $10,000, the federal courts have been chosen as the forum in which Smith seeks recoupment for his injury.

His complaint, a model of brevity, contains two counts: (1) negligent maintenance of a duck pond on the Malarkey property, near North Columbia, a public thoroughfare; and (2) creating thereby an unreasonably dangerous condition to the public using that thoroughfare.

After several unsuccessful attempts by Malarkey to dispose of the matter by motions to dismiss for failure to state a claim, for partial summary judgment and for summary judgment, the case came on for trial before the Court without a jury. Subsequent to the trial, the Court delivered its opinion1 finding for the defendant.

The Court refused to conclude that the maintenance of the pond by Malarkey was an "ultra-hazardous activity" and referred to parks and places, public and private, in the vicinity where waterfowl might congregate. As to negligence, the Court held that there was "no showing that the defendant knew, or reasonably ought to have known", that such a pond "was likely to lead to harm of the general character involved in this case" or that the fact that dead ducks had been found on the highway was notice to Malarkey that ducks were a hazard to motorists. In short, the Court could not find "the vital element of foreseeability" in relating the Malarkey pond to the accident. Accordingly, judgment was issued dismissing the complaint.

Plaintiff called as witnesses persons who, while driving along North Columbia, near the Malarkey property, had seen dead ducks at the side of the road, ducks walking across the road, ducks sitting in the middle of the road and ducks flying at low levels across the road. In one instance, the front of a motorist's car had struck a duck, with unfortunate consequences for the duck. If ducks chose to walk across a well-traveled public highway used by motorists instead of using less dangerous aerial routes better suited to flying ducks, they might well have subjected themselves to such an eventuality. The roadside dead ducks certainly indicated that motorists were a hazard to road crossing ducks, but by no means that such ducks would be likely to be the cause of the type of injury incurred here. Furthermore, even if it had been, one would have expected the record to have been replete with incidents of ducks crashing into motorists with notice thereof to Malarkey.

Appellant also adverts to the Malarkey habit of putting food and grit around the pond about 4 o'clock in the afternoon and argues that even if the pond itself was not the well-spring of the dead duck's conduct, Malarkey was still culpable because of these other lures with which it seduced the birds to come to the pond. However, once again, even assuming appellant's premise that mallards find food and grit irresistible, there is no way of knowing whether the Malarkey provender was the aim of this duck's low trajectory. And there is no evidence which would indicate that the duck was in the area for a midnight snack twelve hours ahead of schedule or that the pond was the duck's intended destination. Further speculation along these lines would be pointless. But even if this feeding practice caused an undue assemblage to partake of Malarkey largesse, it would not account for the unexpected flight of a single duck in pre-dawn darkness. Furthermore, the pond was 100 yards from the highway, surrounded by a seven foot fence with railroad tracks between highway and pond.

The area is a game reserve and should be naturally attractive and conducive to migratory birds. In addition to the parks and open areas previously mentioned, there is somewhat nearby the Columbia River, the Columbia River Slough and green fields where ducks have been observed to congregate and feed.

The waters of the Malarkey pond might well be said to be alluring to ducks but by no stretch of the imagination is the maintenance of an artificial pond an ultrahazardous activity or a foreseeable cause of an injury of the unusual nature suffered here. The activity is neither abnormal, unusual, or especially dangerous see, Reter v. Talent Irrigation District, 258 Or. 140, 482 P.2d 170 (1971) at least not in an area which is already rife with waterfowl and water.

Appellant says "Nothing short of removal of the pond could eliminate the risk" (Appellant's Brief, p. 6). But query, would elimination of Malarkey's rather minute pond remove the risk? Complete protection of motorists might well require the elimination of the game refuge, the surrounding green fields, the Columbia River Slough and possibly the diversion of the Columbia and Willamette Rivers as well, if flying ducks were to be recognized as a constant peril to motorists.

The parties here both have proceeded in a well-accepted format of argumentation, namely, an almost biological analysis of cases and the Torts Restatement. They have dissected and then put under the microscope each and every element stated therein. Tort cases, however, so much dependent on their own particular facts, are not suited to such treatment. The Trial Court here heard and reviewed the evidence presented and then, in finding for the defendant, held that the maintenance of the Malarkey duck pond was not an "ultra-hazardous" activity and that the type of accident here suffered was not foreseeable. The law and the facts support this conclusion.2

The oral opinion dated March 14, 1974 has been transcribed as an opinion, filed as findings of fact, and conclusions of law and order pursuant to Rule 52, and is to be found at pages 149-155 of the record on appeal

There is an indication in the record that the Judge and counsel planned to visit the Malarkey property on the afternoon the trial ended, thus giving the Court and counsel the advantage of visual inspection

I can't believe you posted an entire case on the blog...OK, I may have one to top this...

take your meds and call me in the morning--that is the response peeps on the couch tend to get when posting stuff like this.

Clink, it was all ducks.
Anon, we never tell people to take their meds and call in the morning when the topic is ducks.

I thought it was just ducky.

just put down the ducky!

Dinah--i meant that you have the luxury of posting something offbeat just for fun, because you feel like i,t and no one will think you need to take any meds. those of us who do take meds are assumed to have gone off them when we send stuff to people that would fall into the this offbeat/silly/fun category. so all i meant was: lucky you; some of us have to maintain a narrow range of emotion and expression no matter how well we might actually be because of the label and the stigma.

Anon,
Probably best not to live your life in a manner that attempts to alter the perceptions of others, but rather in an arena that allows for the expression of your own personality, ducks and all. To borrow a famous quote about another form of poultry, one that transcends diagnoses, personality issues, and phase of life problems: Don't Let the Turkeys Get You Down.

And please rest assured that Roy has called me every name in the book from histrionic to judgmental and I have suggested he try every form of medication, and sometimes this is how people dance and sometimes the toes say ouch. There are people in my life who roll their eyes every time I open my mouth.

If you want to write about ducks, by all means, do.

I'm surprised that the plaintiff would bother crying fowl in court over such a clearly routine driving risk; he's lucky he didn't hit something more substantial (eg, pole, tree).

I get Anon's comments, but agree that one can try too hard to be "normal" and to try to train others to know the difference between everyday offbeat and pathologic offbeat.

Yes, I heartily recommend a book called, Why am i afraid to tell you who I am? or some such, just be yourself, with all your oddities.

Made me a bit less afraid to tell people I like Wonder Woman, for example.

dishing (odd word verify for a duck thread, are we dishing up duck today?)

I'm surprised that the plaintiff would bother crying fowl in court over such a clearly routine driving risk; he's lucky he didn't hit something more substantial.take your meds and call me in the morning--that is the response peeps on the couch tend to get when posting stuff like this.You have said it very well. Keep going.
This is a fascinating post.

Anonymous,
It's horrible to hear that you feel you have to refrain from doing offbeat, silly or fun things.
You just need to educate people on the difference between "you" and "illness".
My friends and family send me back to the doctor when I STOP being silly!

P.S. Why the obsession with ducks?

P.S. Maybe also get a 'shrink' as silly as Dinah?

The whole thing is a base canard.