The Psychology of Survival 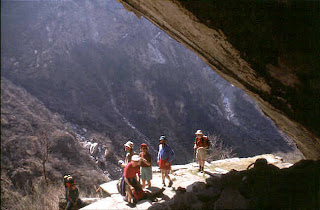 I read this BBC story recently about the Chilean miners trapped for 17 days, who now face months of waiting underground while a rescue tunnel is dug. Although they are all physically well and expected to survive, they face the psychological challenge of waiting for rescue from the cave.

This story resonated with me because lately I've been hearing a lot about a new book, No Way Down, which was featured on NPR along with some other mountain disaster books. No Way Down covered the story of several teams of mountain climbers who were stranded on K2 when an icefall cut their ropes. Most of the climbers died although a few managed to pick their way back to base camp.


Survival stories have always been popular. Entire television series now feature teams of people pitted against one another to overcome some test or challenge. Disaster movies were popular back in the '70s, when the Towering Inferno, Airport and the Poseidon Adventure let us watch people get picked off one by one.

Why do we love this stuff?

I think it's because these stories reflect humanity's greatest strength, the power of adaptation. Whether we're talking about natural disasters, accidents, the exploration of Colonial American wilderness or longterm science expeditions to Antarctica, the psychology of survival is fascinating because we like the idea that one's mental attitude can make the difference between life or death.

A search of Amazon reveals a surprising number of books about survivor psychology. Most focus on outdoor adventurers, but others were based on interviews with survivors of accidents like plane crashes or fires.

The survivors in these books lived because they were trained and experienced in outdoor living. They weren't "survivalists" per se, people who stockpiled food and weapons for the future fall of civilization. These survivors were people who were able to stay calm and reason in the face of fear, people who retained their optimism and determination in spite of great odds. Survivors focussed on others rather than themselves, either thinking about their families or their fellow survivors.

Sitting in a prison cell for several years seems like nothing compared to surviving a high altitude mountain disaster, but I think there are some principles that apply in both cases. The prisoners who do well are the ones who are future-oriented and determined to "work the time" for self-improvement. They have external family they care about and plan to return to. And yes, previous prison experience helps too.
Posted by ClinkShrink on Monday, August 23, 2010

Sitting in a prison cell for several years seems like nothing compared to surviving a high altitude mountain disaster, but I think there are some principles that apply in both cases. The prisoners who do well are the ones who are future-oriented and determined to "work the time" for self-improvement. They have external family they care about and plan to return to. And yes, previous prison experience helps too.

I'd take this one step further, clink, and suggest that once I overcame my own obstacles and became future oriented, I was able to "work the time". Previous mental illness experience optional.

Victor Frankl's book, "Man's Search for Meaning" posits similar ideas and the tales of survival he writes of are mindnumbingly touching, devastatingly sad intensely inspiring all at the same time. Worth the read.

On a personal note, my depression makes it impossible for me to either see into the future, or even worse, to even want to see a future. Why would I (why would anyone) want a future with this much suffering?

I asked my psychologist once, if I'm so terrified by disasters, why am I so drawn to disaster movies and books, and he says it's because people are often drawn to that which they are most afraid of. I guess it's like horror movies, except I HATE those, ugh. And while I like the special effects of disaster movies, it's more about how the people react (ok, the special effects ARE cool, as long as they keep the gore and burning people down) to the situations they are in, like in War of the Worlds, the contrasts to how the different people handle what may seem unhandle-able is quite interesting to me. Some try to "dig in", quite literally, and others try to face the aliens, and others run, others fight over resources like cars, etcetera. Others, like the main "hero", have a goal, getting child(ren) from point A to point B. While the world is coming to pieces around you.

Currently reading a book called "Eater" about an intelligent black hole that heads earth's way and thinks it is doing us a favor by sucking us up. Or trying to. How do you "fight" a black hole, let alone an intelligent one, anyway? Heh. I've read it before, it's a good one, despite the implausible premise, heh. Now there's a disaster novel on a large scale. I think they even bring in some shrinks to talk to the thing, I forget, to figure out its' psychology, been awhile since I read it.

Or then there's Moonseed, where dust is brought back from the moon and starts to eat away at the earth . . . that's a good one too. Would make a good movie!

My own therapist comments frequently on my 'survival skills', in the non death by impalement sense. I'm curious as to how psychiatrists differentiate. Is there much difference between someone trapped in a cave for days and someone who survived an emotionally abusive household for 18 years? Is one better than the other? Same skills, different skills?

Watch "The Colony" on the Discovery Channel for an interest experiment in the psychology of survival.

I like to think I'm pretty tough psychologically but the thought of being trapped like those Chilean miners gives me the creeps. That's a survival situation that scare's the heck out of me but drop me into the wilderness alone and able to see the big sky and I'd be OK. Trapped miners have nothing to do whereas wilderness survival would keep you busy. They're very different ordeals