Not Enough To Go Around 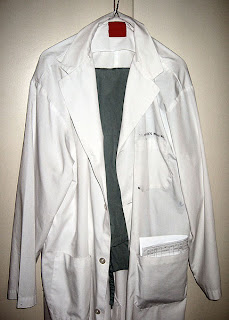 In Friday's New York Times there's an article entitled "Pharmacists Take Larger Role on Health Team". The article discusses pharmacies that are expanding their revenue by adding services to their usual role of dispensing medication. In addition to watching for drug interactions, pharmacists are recommending alternative cheaper medications to patients and offering life style advice for chronic conditions. In some pharmacies they work with nurses to monitor diseases such as diabetes and hypertension. As one pharmacist in the story put it, “We are not just going to dispense your drugs…We are going to partner with you to improve your health as well.”

Why is this happening?

Business forces, of course. Once pharmacists did a lot more than they do now. They used to manually make medications---compounding pills and tinctures and unguents---in a time-intensive process. Now, they dispense packets of pills that are mass produced in factories. That's a lot of education just to stand behind a counter and fill a prescription. The profession becomes more attractive when it is framed in terms of patient counseling and fundamental health care interactions.

Also, health care plans will pay for it. Medicare pays $1 to $2 a minute for a medication management session with a pharmacist, according to the Time story. Not bad. One person in the story claims that "pharmacists could do as well and better than a physician” for less money.

This is a claim doctors hear periodically. There aren't enough doctors to go around, so other professions try to fill the void. Rather than train more doctors, it's quicker and cheaper to grant lesser-trained professionals similar privileges. There's a standard rationale that's given:

1. We're not competing
2. We work under supervision
3. We know when to refer

All of this may be true as a whole, but not necessarily for a given allied health professional. Supervision usually isn't on site, and it doesn't necessarily mean that each case is being discussed with a physician. The "we know when to refer" part should mean that there is a written policy or procedure documenting the limits of the scope of practice or the criteria that should trigger a referral to a physician. And a means to ensure that those procedures are being followed. All of this means that an additional layer of bureaucracy---with its attendant costs---will accompany the broadened scope of practice.

Why don't we just train more physicians?
Posted by ClinkShrink on Monday, August 16, 2010

This makes my blood boil. It's about cheapening care at the expense of patients. And just where is this counsellong to take place? At the counter with your neighbor's ears flapping? How much does a pharmacist know (or should they know) except what is being prescribed)? If I wanted a second opinion for my family member, I would seek one out from a specialist. It's a violation, and potentially dangerous. Do you want to know what I really think?! :)

I am a patient and find this outrageous. I am all for pharmacists answering questions about a drug a physician has prescribed such as can I drive while on this, should it be taken with food. This is especially useful for elderly who might forget when the doctor said. A pharmacist might also email the doctor if they note a potentially problematic drug interaction especially if the patient sees more than one doctor for medication. Mostly, though, I do NOT want a pharmacist to prescribe!!! Will he undress me to listen to my heart, look at blood tests, etc? No! Also I hate going to see a doctor and being shunted to a physician's assistant or nurse and never see the doctor.

Because they prefer driving in cars?

Yes and no. It made me pretty angry when a pharmacist from my insurance-mail company called to ask questions and (i assume) give advice, whatever, about my meds, and I flat out refused to discuss any of my health with some strange person from Medco.

On the other hand, I've found that my pharmacist knows way more about medication interactions then any psychiatrist I've ever seen does. And a pharmacist is certainly more readily available, as well.