I Thought We Were Friends 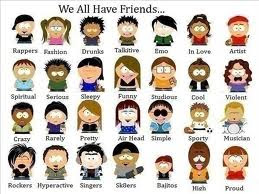 Social networking adds a whole new dimension to human interactions. I used to ask people about their relationships during my initial psychiatric evaluations, and would include questions like "Are you close?" "When did you last talk?" I've had to change this...because now "talking" means oh, talking...in person, on the phone with a voice-to-voice conversation, via text message, a note on a Facebook page, an IM chat, an email message. They all count. We've become a weird world. And oh, yes, I've "spoken" to Roy and Clink this morning-- a couple of emails, so I'm not sure if they've "heard" yet. Clink wrote on my wall in the last day or two, I tagged her in a photo of an orange mushroom, and we've had numerous text messages (and Roy and I actually Spoke-on-the-Phone) yesterday....all inspired by the request of our publisher for a photo of us for the book. The big issues have been addressed: I got a unanimous vote for Curly-not-Straight, and Clink has refused to pose until she gets a haircut. Okay, I'm rambling off topic.

So people talk in therapy about their FB relationships. They get upset about things that are written on walls, they feel spied upon by family member friends, friends and enemies alike. (Oh, but the family would be torn apart if we unfriended each other!)....

So the other day, I realized I'd been unfriended. I used to get regular newsfeed tidbits from someone I work with. I realized they were no more, and I wondered about what was happening in his life. First off, let me say that they were a little unsettling at times anyway--- lots of "I don't like my job" groans, and his boss had said to me once, "I think he forgets who his friends are." Well I decided to check in on "George" and I searched him on my FB search bar. Ah, he only lets his friends see his info, it tells me. "But I am George's friend!" I shout. (-Not really, but it makes the plot more interesting). And then I realize that I was George's friend. Not anymore. I'm left to wonder why. Did I offend him? I thought he liked me. I like him. Did he decide he wants to rant in ways I shouldn't see....well that's okay. How do I now act with George in 'real life?' Do I ask about this? I won't: What could there possibly be to say other than to make George uncomfortable. Did he think I'd notice? Does he want me to ask?

Roy is groaning about now, he says I over-think these things.
Posted by Dinah on Sunday, August 22, 2010

Consider the possibility that he unplugged from Facebook. You listed reasons that cause Facebook to complicate "real" life. Perhaps too much of his complaining was getting back to the boss and to his other targets and he just pulled the plug. Since you were a fringe member of his group it seems unlikely he tossed you out. What did bother me in the little I did on Facebook was that when I "friended" my teeny-bopper niece, suddenly HER friends comments started appearing on my wall and I had no way to delete the stupid comments. As a result I limited the connection (electronically) with my niece which I had no desire to do. I also blocked and hid my Facebook page (I HOPE!!!). Because things can't be deleted from "the wall" it leaves people in a quandary if they do not like their friends friends and do not want their comments and doings.

Perhaps he had, as your boss said, "not realized who his friends were" and decided that if he's going to gripe about work on Facebook, he shouldn't friend coworkers?

I do wish privacy settings could be differentiate between groups of friends, or that there could be "levels" of friends. At the very least, they could make "acquaintances" and "friends" separate groups with their own privacy settings.

I don't quite get the concept of people feeling "spied on" on Facebook, though. Unless somebody creates a new account just to "spy" on someone who has unfriended them, how can it be spying? Doesn't spying imply an uninvited person gaining access to something private? If it's been published, it's not private. It seems bizarre to me to post something online for others to see, and then get upset when someone looks at it.

i wish i had NEVER gotten involved in Facebook....gah!

I don't even know George, but I bet he can handle it.

This is one reason I'm blogging more sensitive or most matters now over on VOX; my in-laws don't deserve a window into my life. At least, one that they don't have to put out any effort for. If they'd actually show some interest and, say, GIVE ME A PHONE CALL, I'd be happy to talk to them.

in the 9 months since I've had the first surgery and then 5 months since the second surgery on my knee(s), with all the horrible, constant pain I've been in, not ONE of my in-laws, mother, father, sister, brother, have taken 5 minutes to give me a supportive phone call during that time. Not even a minute of their time, during all these months, could they spare to think of me and give a minute of emotional support to me during the hardest year of my bloody life.

So, no more free information for them.

I know several of them read Piebolar, and I may still post some things there from time to time, but most things will go on my Vox blog now.

I choose not to be on Facebook for the same reasons, they don't deserve the access to my life if they can't even lift the telephone. I used to, and we used to drop by and visit alot, but the effort was never reciprocated.

I suggested that my pdoc, Pete visit this site. He didn't know it and hasn't visited before, but he is a recipient of a Heifer International goat of greatfullness or two. No I didn't go with "World's best psychiatrist coffee mug"...Maybe next year.... He says he is fine with his waiting room being used as a clearing yard.

No relation to current post at all, but that is goats for you.