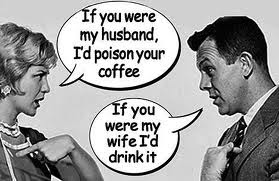 Our regular podcast listeners know that the Shrink Rappers love to bicker. The topic doesn't matter: Xanax, allocation of health care resources or punctuation, if there's a potential for argument we will have one. Some of our reviewers commented that the bickering makes them uncomfortable or is embarrassing to listen to. All I can say to those listeners is: we've always been this way, we're never going to change and we wouldn't do it if it weren't fun for us.

Everybody probably knows someone who likes to debate. If you say one thing, they'll say something different just for the sake of having a discussion and engaging someone. It's a relationship thing, like talking about the weather. Nobody really cares if it's sunny or too hot or if there's a storm approaching, it's just a way of maintaining a connection. For some people, bickering serves the same function.

I appreciate a good debate occasionally because this keeps me sharp mentally. When someone tells me I'm wrong I question my assumptions, do some homework and learn something. My bickering friend learns something too (I hope). If the debate goes on too long or gets uncomfortable, I disengage or admit that I'm too tired to continue. It's not a big deal. People who maintain relationships with bickerers can't be too sensitive. There's nothing personal about it, it's just a way of life.

And by the way, Dinah was right: the period goes inside the quotation marks. Dinah effectively affected a change in my writing affectation. Can you guess what her writing quirk is??

Affectionately yours,
Clink
Posted by ClinkShrink on Saturday, August 28, 2010

Poor Dinah.
Effect/affect, which/that, advise/advice, you can't imagine how many times I look this stuff up.

Saw the title and thought it had to do with me and Victor. Though only one of us knows why we are bickering.

You say tomato and I say Tomahto...

I was thinking how my closest friends often have opposite views on at least some important issues to me. For example, someone who shares my religious views but who disagrees violently with me politically. Or vice versa. This can sometimes be VERY awkward (election time) but also helps to keep one honest, and forces one to think. One doesn't learn or grow hanging around people who are mutual admiration or agreement societies. I tend to be seldom wrong and never in doubt, and I rely on more liberal friends to temper my ferocious conservative views... :)

it is about us, dear. she wanted me to comment. i'm kinda at a loss, though... prompt me. i need something more than "i don't know why we're bickering." call me a pickle or something.

If it's about us, then why's it about grammar?

Why don't you people just say what's on your minds? I assume something is wrong, but everything gets woven up in sarcasm and wit and it's very hard to know where the humor ends and the distress begins. Some of it feels pretty mean-spirited, but I've given up. If you have something to say, say it. If all you want to tell me is that I'm a controlling bitch, well, you've said that and there are other people who like french food. Maybe it was the china pattern you didn't like? Perhaps worry about all the other things that may be stressing you out, eat a pickle for good measure, and call it a day.