Drugs, Soap, and Rock and Roll 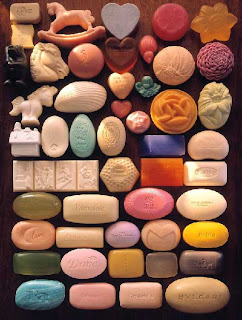 There's always something new, even in the world of substance abuse. Lately I've been reading a lot in the media about K2, a synthetic cannabinoid that's being sold (and outlawed) in many states. It's commonly mixed with herbal incense and smoked. Nicknamed "spice", it was originally created by scientists and called JWH-018. Apparently some states' poison control centers have been getting calls about it due to the physical symptoms it can cause, specifically palpitations and GI problems. The part of the story that I thought was interesting was the fact that originally only 250 milligrams of the stuff was created, in an "official" research lab, but that home chemists quickly took up the experiment and it's now a part of our national drug culture. There's a part of our drug problem we need to think about---should research labs be allowed to disseminate information about how to manufacture controlled or intoxicating substances? Drug control efforts almost completely focus on those who possess, prescribe or sell pharmaceuticals but you don't hear much about the regulation of research labs that invent the new stuff. Federal and state drug enforcement agencies mainly target "home chemists" by pressuring retailers to make certain chemicals less easily available----fertilizer and pseudoephedrine for example.

I'm a bit of a home chemist myself, since I occasionally whip together batches of homemade soap. In order to make soap you have to mix oils with lye. What I didn't know was that lye is also used to make methamphetamine. My hobby took a hit when when the makers of Red Devil lye decided to pull their product off the shelves, due to government pressure. Talk about a stir in the soap makers world! It eventually came back to the market, but in a form that's no longer good for soap. Or for drugs either, presumably.
Posted by ClinkShrink on Friday, August 20, 2010

should dissemination be allowed, indeed...

How many more of our young people will we lose to zest of lemon?!

I find this completely irresponsible. Clinkshrink brings up an important point about policing our labs, our drug companies, our research sites, and ourselves. It's an issue at the intersection of public health, homeland security, and the war on drugs. And here, on a professional blog site, a site maintained by psychiatrists who should know the true cost our society pays for intoxicants, I find a recipe for illicit watermelon-elderberry moonshine brandy. And what is more outrageous is the glib attitude and outright sarcasm demonstrated by the other anons against common sense governmental and policing tactics. The fact that this has not been immediately deleted makes me wonder if Shrink Rap is not really validating Watermelon-Elderberry Moonshine Brandy--an intoxicant, any way you look at it.

I really like your soap. Can you make me watermelon elderberry moonshine brandy shampoo?

It's a pretty picture, too.

I used to make homemade soap, too, but it was the melt & pour kind, no lye needed. That's too bad on the lye, alot of small home businesses make a living selling homemade soap, or try to.

I've gotten some yummy varieties (not that I eat it) off of Etsy. From the ones who I've heard make the best stuff, and tell you EVERYTHING they put in.

You can tell who makes money at it, and who doesn't, by how much they sell.

Anyway, neat that you make soap. What scents do you like mixing?

And HEY, they are busy people, you. Who knows when they have the time to delete anything, anyway?

I think that the "War On Drugs" ought to be dropped. It does more harm than good to fight drugs. Our children in high school have easier access to marijuana than to alcohol because alcohol is legal and controlled and cheap enough that it can't be sold for a high profit on the black market. Street drugs are PUSHED on kids. There is a lot less pressure to drink than to do drugs because gangs don't make a profit on alcohol and it is hard for kids to get. Illegal marijuana is being carried around in girls' bras in high schools. I know because I am a teacher and the kids have told me. Makes street drugs illegal just builds the strength of the gangs. The gangs are AWFUL. I have had close encounters with gangs in school also.

I don't personally use drugs or drink alcohol, but I'd sure like to see the gangs as less of a presence in inner city schools.

I am astonished that a blog post with this title didn't turn out to be about this amazing story. Things get particularly mind-blowing around 2:30, and continue in that vein. Highly recommended for people interested in the war on drugs and saponification.

less than $7 a bottle. made in taiwan merlot.

Sarebear is right, as usual! This is a thread about soap, not moonshine! And Clinkshrink is probably way busy, no time to monitor these things all the time, Anon #3.
By the way, do you think I could substitute agave necter for granulated sugar on a 1:1 basis?

I'll let you know about the substitution in 30 days.

My family comes from German immigrants of the late 1800"s who settled in Buffalo, NY. My father's brother moved to California with my grandparents and as I remember it, pretzels in Buffalo, New York (REAL German pretzels) were made with a lye bath as part of the process. The lye step had been outlawed in California, so whenever we drove cross-country to visit we were requested to bring bags and bags of pretzels for my uncles. This was the 50's and early 60"s. I doubt that methamphetamine problems were even an issue then (was it invented yet?). I wonder what CA had against lye in pretzels?

By the way, the fact that you are "Anon's" really tells much!

#4 anon wrote: "The fact that this has not been immediately deleted makes me wonder if Shrink Rap is not really validating Watermelon-Elderberry Moonshine Brandy--an intoxicant, any way you look at it."

You are correct; we have not yet validated Watermelon-Elderberry Moonshine Brandy. Should be ready in about another 23 days.