The Power of Initials 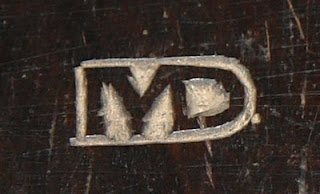 I took my car in to the shop last week to visit his Car Momma. I've been going to this garage for years and I know most of the mechanics. I've run into Car Momma at the hair salon with her head wrapped in a towel. I've heard about her son, his school activities and her home renovation projects. She's heard about my vacations and seen my climbing pictures. I've always been on a first name basis with the people I know there.

This time, I had to leave the car and get a rental. I left a voice message with the rental desk and when the rental guy called me back at work I answered the phone with my usual, "Dr. ClinkShrink". Now, my garage knows what I do for a living and it's just never been an issue or really even a topic of conversation once the novelty wore off.

The difference this time was that the guy worked on my car was new to the shop. When I arrived at my scheduled time the next morning, he was standing in front of the shop, clipboard in hand, waiting for me. "Dr. ClinkShrink?" he asked and he shook my hand. He had all the paperwork waiting to go, my rental was lined up and waiting, and every reference to me was preceded by "Dr.". I gotta tell ya, it felt weird. Eventually he asked me if I was a medical doctor, explaining that he asked because "there are a lot of people who go by 'doctor' who aren't actually MD's."

My first thought was: "blog material".

I never go by my title or my initials when I'm off duty. When I first graduated from medical school a got several letters (hand-written, pre-email) from my mother addressed to "Dr. ClinkShrink" or "ClinkShrink, MD", but that was about it. I think (and still do) that people who flash their initials around are a bit obnoxious. This was just the first occasion that I really was struck by what initials can do. (And no, I don't plan to make a habit of flashing the 'MD'. It just felt too weird.)

And for the record, I did make a point of telling the rental guy that PhD's earned their degrees too.
Posted by ClinkShrink on Wednesday, August 11, 2010

My therapist uses a lot of letters standing for qualifications after the proper name, and always seems to list multiple credentials after that as well when writing in professional contexts. I find it odd (I don't know if it's slightly overdone pride or insecurity or what) and it's a subject of mild, but ongoing, contemplation for me. But clearly the professional in question thinks initials have power, too.

When my psychiatrist calls me on the phone he says this is "First name" "last name". I call him "Dr." "Last name" because that feels more respectful. I would not feel right calling him "first name" but clearly he'd be OK with it.

My mother got a PhD in mathematics at about age 40. It was a big struggle because her studies were interrupted by WWII, getting married (to somebody she seemed to wish she had not married), having kids (which it seems were forced on her by society or the lack of adequate birth control at the time). Hence once she got the PhD she was Dr. "Last Name" ALL the time. She wanted mail to written to Dr. and Mr. "Last Name" and she wanted to be introduced as "Dr." by family and friends even at casual gatherings. My husband was a PhD in geophysics and like you, used it only in professional settings.

My first psychiatrist was a D.O. instead of an M.D.

And no, that's not Doctor of Opthalmology.

Maybe that was part of my problem with him, but when we DID click, it was BRILLIANT. When he didn't listen, it wasn't. We bashed heads pretty good, then.

And you are welcome, Clink, looking forward to the results/review of that outing, down the line!

Deftly done. I think in general it's helpful to patients and doctors alike to use "Dr." and last name as a reminder of boundaries (reassuring to patients who have had traumatic pasts) and also helpful to people who find it difficult to confide. Most people do not find it difficult to disrobe in front of their internist, for example, once past adolescence, even if of an opposite gender. Because they are a doctor, and we are socialized to feel that that is okay. Because the person is a professional. So if one is talking about traumatic or embarrassing or shameful or depressing or agitated things, seemingly small things like what we call the person we are confiding in matter. The classical psychoanalysts used to theorize endlessly about the frame.

It may be different in a prison, tho. Tho my outsider's hunch is that the therapeutic value of a scarce resource (ie: the time of a highly trained professional is incalculable), so just knowing they are talking to Dr. John Smith would mean more than John Smith.

ALthough, obviously, no need for initials in private life. And I can imagine that off duty, one would want to hide all signs of one's profession lest one be confided in by everyone.

In my training and profession before children, I was in the minstry and a chaplain and everyone who found out used to immediately launch into a guilty confession of their moral or spiritual lapses or their church attendance or ask me about some religious dilemma, etc. In some cases, angrily ask me e"How could God do this to me/my mother/whatever?" Somewhat similar professions.

Interesting. I always find it fascinating that some of the psychiatrists and psychologists identify themselves (typically on the phone) as "Dr so-and-so" or "first name-last name." I always call them "Dr. whoever" unless explicitly instructed to call them by first name, but it fascinates me to hear how they identify themselves. Probably says quite a lot about the way they view themselves!

I refer to my shrink just by his last name when I'm not talking to him directly.
Maybe that's because his name is a little more obscure than smith or jones. It doesn't remove the respect I feel for him, he just means more to me than just a doctor.

I know part of the difference, but perhaps one of you three could post about the difference between the two "physician" degrees, if that's a way for me to describe it. Most people do not find it difficult to disrobe in front of their internist, for example, once past adolescence, even if of an opposite gender.

A D.O. and an M.D. can set up the same type of practices. I had a D.O. psychiatrist, for example.

That's why I wanted them to explain. I think it means Doctor of Osteopathy, it's a different way of thinking.

But they are doctors who can practice medicine like M.D.'s can, so for certain specialties (not psychiatrist lol) you'd have to get into a patient gown, too, for a D.O. It's just a lot rarer degree.

I just don't know much about it, or what kinds of doctor specialties are available in it so some of what I say above is guessing. I know at least one university in the U.S. provides it or my psychiatrist couldn't have a degree from there, lol. Couldn't have gone through the D.O. program.