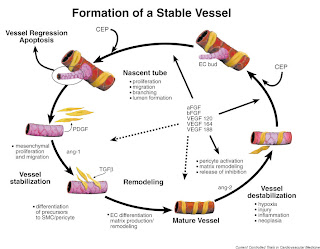 They show in rats that:

This study adds to the weight of evidence that one of the end results for antidepressant treatment is stimulating new brain cell growth. It is not clear whether this is related or not to these drugs' effects on serotonin or norepinephrine, but it appears it may be possible to bypass neurotransmitter mechanisms (and avoid their subsequent side effects) and go directly to neurogenesis. This may lead to some entirely new treatments for depression and bipolar disorder down the road (way down the road).
Posted by Roy on Friday, April 06, 2007

Sounds like this might be in some trials in the near future. I know quite a bit about new treatments and trials. You are right that this might be an option many years from now. A long, slow process is ahead. And when the word "speculate" is in any article, the process of getting it from an idea to the patient takes even more time.

Stupid question: Do depressed people have reduced number of neurons or neuronal death in their hippocampusus (hippocampi?)

I like seeing stuff like this. It gives me hope about neuronal regrowth and neuroplasticity. You're right, it may be a long way down the road but at least people are still looking and not giving up.

Wait, beans are a legume, not a veg.

Or, as my dd has taken to saying w/no disrespect intended . . .

Midwife (no question is stupid)...
European J Neurosci 2001: No difference in postmortem hippocampi of depr and nondepr humans.

Uhh, I don't know the answer but these are places to start. Let us know if someone can synthesize the latest poop.

If you want synthesized poop, try some of those journals and such made out of processed Elephant dung.

Yeah, OT. I think this (not the dung, but the subject of the post) is interesting, although I still feel FAT everytime I see the hippo part in there. Lol.

Ah, thanks Roy. Trust me, there are stupid questions. (Such as, from my brother, "My auto emergency kit comes wiht flares; can you help me think of something fun to do with them? Um... how about keeping them in your car in case you need them?")

It looks like the answer is "Maybe not, but maybe...". :) I was just thinking that if the hippocampus in people with depression is normal, then making more neurons grow there may have unforseen negative long-term effects. But if, the hippocampus is not-quite-normal, then additional neuronal growth might be exactly what people need.

Or maybe the actual lesion is somewhere else, and making people grow more hippocampal neurons (hipponeurons?) allows their brains to compensate in different ways.

Woohoo, it's like being high, without the drugs (never done drugs, but when describing one particularly manic episode, my ologist said I was high; when I described that I quit feeling guilty about feeling so frickin' AWESOME and just laid back and enjoyed it and floated away.)

As a newly diagnosed cancer patient, I am very interested in the question about antidepressants VEGF and cancer. I have been taking Cymbalta for the last 4 years and now I suddenly have cancer, liver hemangiomas, and a proliferation of non-cancerous colon polyps--all conditions driven by VEGF.
Has anybody seen research that directly looked at whether Cymbalta or other antidepressant usage could fuel cancer angiogenesis?