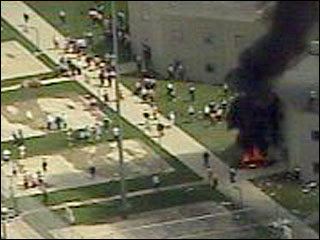 I wasn't originally planning to blog about this, but today's news about the riot at the Indiana prison brought me to it.

Our facility was overcrowded recently due to the closing of another prison. We were running 200 inmates over capacity. A conference room on the administrative floor was temporarily turned into a housing area, with mattresses on the floor at night and all through the weekend. During the day when the conference room was in use the inmates were transferred to a single holding cell across from my department.

On the day in question it was hot. Not Life In Hell hot, but uncomfortable. It always takes a couple days for the institutional ventilation system to catch up to the external weather. The inmates were crowded together with no showers, no recreation and no commissary.

When an officer opened the door to let someone out, an inmate charged the door. Voices were raised and got loud. Then louder. Then louder. I heard the officer radio for assistance.

The holding cell was across from my department. I was alone with our secretaries. When the noise level rose I went out to check on the action, thinking it might be wise to have a shrink available to intervene.

Note to self: do not run into a burning building when you are not carrying a hose.

Do not walk toward a pending riot when you are not armed.

Fortunately the black shirts arrived first---a swarm of front line officers, a duty lieutenant and a major. I retreated back to the department and planned an escape route and made sure the clerks knew what to do. (I sure hope the locks on the back office work like I hope they work.)

The loudest inmate calmed down and custody made arrangements to take them out for showers in groups of five. The holding cell was locked back up and no one was injured. The next day 60 inmates were transferred out and now we're back to normal. Life is good.

What happened was understandable given the conditions, but consider Indiana: The prison was only five years old so presumably the ventilation, temperature regulation and cleanliness were all reasonably good. The facility was significantly under census, not crowded. The inmates transferred there were specifically chosen to be non-violent offenders.

It can happen at any time, at any place, for any reason. Here's keeping my fingers crossed for my colleagues in Indiana.

I'm really glad you're ok, Clink! And... maybe you were more brave than stupid?

Most people's workplace risks are things like non-ergonomic office chairs...glad you're okay.

I'm left wondering if the fact that the prison is run by a contractor rather than the state has anything to do with the way things happen?

Maybe broadly, what are the effects of contractor run prisons on prisoners, especially their heath care?

You ran in there, Clink, because you're just the kind of person who wants to help, period. Danger to self notwithstanding.

I am glad that you are alright and that you can think back on the situation and armchair quarterback it while 100% OK.

I'm also glad that you shared this with us. I know it was a deeply personal and terrifying event.

I've very glad that you are OK. We both know that sometimes people get killed in these situations.

Thanks everybody and I want to reassure everybody I really am OK. I was reluctant to put the post up at first because I didn't want to scare anybody, particularly any reading family members. The thing that tipped my decision was when I saw on the AOL news page that the story was given second billing to a story about Rosie O'Donnell. That got me pissed, then it made me think: what would I want people to know about prison riots? How can this be a teaching tool for the general public? The take-home point for me was that riots (or "mass disturbances" as they're called in the trade) can happen for no reason at all, or for a legitimate gripe (like housing conditions) that have gone unaddressed. They have no apparent connection to the nature of the administration (private contractor versus government). Incidents like this also emphasize the importance of adequate staffing ratios and regular inservice training in emergency management procedures for both custody and civillian staff.

Stepping off the soapbox now.

Privatized prisons, aka prisons for profit, doesn't sound like the best way to incarcerate people. From what I understand the prison riot in Indiana had to do with prisoners from Arizona.

I am glad you are ok Clink!

New buildings can have all kinds of function problems.

Some years ago, they opened a brand spanking new medical library at the UC-San Francisco medical campus. Gorgeous building, everything online.

It took about two weeks for them to de-bug the glitches in the tempreture regulating system. For at least a week after the library opened, the air conditioning was out of whack and kept the library so cold that the employees and librarians had to wear winter clothing while seated at their desks.