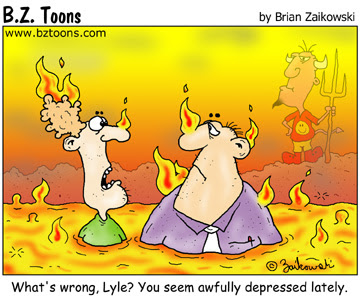 MWAK asked a question in the comments on my "Taxing Taxonomy" post and I started to answer but decided to turn it into a blog post.

The good thing about using a clinical syndrome definition is that it separates diagnosis from etiology. This frees the clinician from zeroing in on one etiology at the cost of another. This is important in psychiatry because an attribution error can be physically risky. The bereaved clinically depressed 75 year old woman may also be suffering from hypothyroidism. The bereaved 35 year old gay man who lost his companion to AIDS may also have an HIV-associated affective syndrome. A diagnosis of a clinical syndrome is only the first step. The importance of psychiatry (as opposed to non-medically trained mental health professionals) is that we know the next step is a good diagnostic workup.

The need to attribute causation really only seems to come into play with when we're talking about major depression even though there are other psychiatric syndromes that can be precipitated by life stress: the first episode of psychosis in schizophrenia for example, or mania. Yet we don't attribute mania to life circumstances. If someone is impulsively spending thousands of dollars, talking a mile-a-minute and staying up all night cleaning the house we don't say "Of course you're happy, you have a great husband and a great job and great kids (or a great dog)." We say, "Please please go back on your lithium." (My favorite causation story is of a psychologist who once asked me, "Is this inmate demented because of the stress of getting an 80 year sentence?" I explained that it was from the stress of having an 80 year old brain.)

The other thing the Times story didn't mention is that all the groups in the study had recurring episodes. Both the loss- and bereavement-triggered groups had a mean of two to four episodes. The trigger was identified only for the index (first) episode. You could make an argument that someone might get misdiagnosed once---but four times? And at least 5% of subjects were hospitalized. I think Roy might have something to say about this. How many times do you see people on your inpatient unit for "intense normal sadness" (the authors' classification) as opposed to clinical depression?

The authors were concerned about the stigma of a posssibly inaccurate diagnosis. Given the information they presented about their own subjects, I'd rather err on the side of caution.
Posted by ClinkShrink on Friday, April 06, 2007

How pathetic is it to be the only one commenting on your own post?

Thanks for the pic Dinah.

Thank you for that, Clink. It was really helpful.

I do appreciate the willingness of the three of you to answer questions that I should have learned to answer in medical school (my psych rotation ended up being kind of pointless). Actually you guys should consider teaching medical students (if it didn't take time away from your blog!). I bet you would end up with a bunch of better educated students, and possibly make a few psychiatrists.

ClinkShrink said...
How pathetic is it to be the only one commenting on your own post?

I don't know. Is is more pathetic than the poster who answers immediately? What does that say about that person? LOL....suffice it to say that we are all pitiable in our own lovable way.

I feel like the designated picture person. You two are growing lazy.

Oh, don't worry about it. Come burn some popcorn.

Well so much for my pity party! I guess I have no excuses now for going to run my errands.

Dinah there's no way I would have found a picture that appropriate. You're too good at it.

Thanks for the warm fuzzies MWAK, that's nice of you. And Parked I think we're still trying to figure out who the loveable ShrinkRapper is. I think we settled on Roy. I'll volunteer to be pitiful.

Dinah, could I interest you in going to a lecture at a museum next weekend? It's a perfect one for me and you're the only person I can think of who's willing to do this kind of offbeat stuff.

20+ years ago, I lost my job due to some classic manic behavior. But I didn't know it was manic behavior at the time because I hadn't been diagnosed with anything. Of course, losing my job made me a touch depressed -- a normal reaction many people surrouding me at the time said.

The bipolar-supplied cards in my House of Cards started to come flying apart. My mother suggested in her understated way "I think you might want to go see a doctor."

The requruired insurance gauntlet made me pass muster with a PCP. 5 minutes and he was shoving litium in my hand and asking me "So know one has ever mentioned to you before about being bipolar?" (translation: wow, you are fucking nuts. I can't believe you held your shit together as long as you did. Wow, you did WHAT for a living?).

Nest stop, small town psychiatrust. Dx stood from the PCP. Even thought the only symptom I exhibited was depression. Treat the sadness about losing my job and everything would be OK...yeah right. I'd be tuned up for launch. Commence countdown: M-A-N-I-A. We have lifthoff. Crashlanding will soon follow and some indeterminant time.

Thanks Tangent your experience said it better than my post.

Clinkshrink-
Glad you posted the link to the lecture you mentioned. This professor is from my part of the World. I think it sounds great but I did have a good laugh.

Dr. Bourget specializes in Andean prehistory with a specific focus on the archaeology and visual culture of the Moche society of north coastal Peru (a.d. 100–800). His research at Huaca de la Luna (Pyramid of the Moon), and Huancaco has led to major revisions in our understanding of Moche society. (University of Texas Press, 2006).

I didn't know we even had an "understanding of Moche society" to revise!! LOL.

i agree with erring on the side of caution and referring, but important to recognize that with DSM's domination of psychiatry, many clinicians have come to automatically attribute a biological causation to a presentation that meets criteria for major depressive disorder, regardless of the etiology.

In the case of bereavement I think the opposite tends to be true.