Pay In Advance To Retreat: Part 2 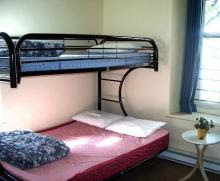 OK, in all fairness I need to post about this. After all, we had a small catfight in Shrink Rap land over the issue of Sheppard Pratt's Retreat program. Now it's my turn to eat my words. Let others rage as they may, I promise to shut up and take it.

This just in from the New York Times: Booking a Cell in a 5-Star Jail.

Apparently Orange County has a number of facilities where selected inmates can pay anywhere from $82 to $125 dollars a day, in advance, to be housed in a nice clean safe single-cell facility where they are allowed to have cell phones and/or computers and where people can bring them hot meals. Dinah, have I got a jail for you.

Inmates are allowed to leave during the day to work but are required to have small jobs within the jail to keep the place clean. Proceeds from the "pay-in-advance" upgrade program go to underwrite the costs of other county facilities.

So what do I think?

**********
Or for the truy adventurous, you can stay in the Ottawa jail hostel. For those who believe a jail should be a hostel environment.
Posted by ClinkShrink on Saturday, April 28, 2007

Ummm, I thought the whole purpose of jail was that it's punishment, supposed to be a miserable experience to deter one from a life of crime. A single cell with a phone and computer and no fear of the usual things that make prison prison, hardly seems like punishment.

So I vote yes on luxury hospitalizations (not egalitarian but neither is life) for the ill who want to fork it out, but I vote No on luxury jails.

This is not a psychiatric opinion.

I think it is a great idea. Jails are so costly and comes out of our tax dollars. A "user fee" for prisons would likely never fly, but providing some "amenities" at a high cost can help prisons be more self-sufficient.

This could, of course, be abused (like prison labor and prisoner experimentation used to be), so openness to the procedures would be needed.

As for Dinah's comment about making them suffer more, I think the solitude and lack of freedom is an adequate punishment. But I do think that their remains an unstated agreement that the public will not demand much improvement in prison conditions (gangs, rape, beatings, intimidation) because these things contribute to the fear of going to jail, and thus help to maintain law and order in free society.

1) Why does that cell look cozier than your average freshman dorm room?

2) Do they have a AAA discount?

Well, I've answered my own first question--that "cell" is in the Ottawa hostel, not the ritzy jail.

But my second question still stands.

Whoa. Like, WHOA. When I first read this post I was ready to rail against the indecency of it all. But after reading your take on it (and letting my inner cynic come in, give me a nice speech about capitalist society whilst taking out my inner saint with a well-placed tranquiliser shot) I have to agree with you, it DOES seem like a good idea.

I do, however, agree with Gerbil's first question: that room looks more comfy than MINE. And I pay big bucks for this room, too. Sheesh. Maybe I should just go rob a bank somewhere.

OK so now that I'm into motorcycles - if I do end up in jail ever (as opposed to ending up in the ICU!), I may have to consider forking it over for something like that!! (I'm totally kidding - so far, I haven't ridden the motorcycle alone or been in control in any way whatsoever (except by having the ability to poke Jordan to make him go slower!), and I do plan to take a Motorcycle Safety Class! No jail for me!)

I like the post, and I see the financial benefits as jail is costly to the public on the whole, but I also agree with what Dinah is saying. This is like, "mommy grounded me" type jail. Where's the deterrant? I know of a lot of people from workin in the bad areas of the city where jail is quite preferable to the life they have outside - so what keeps them from doing bad stuff to end up in jail? Some of them do bad stuff and get caught on purpose because they view jail as better than being homeless or living in some dangerous dump.

Sad to say that - but it does make ya wonder!

I guess this is a minor improvement over what happens elsewhere - wealthy and prominent people simply get suspended sentences, or worse yet they are not ticketed/prosecuted at all. Also, Michigan charges "rent" for all inmates, obliterating any hope that former inmates will pay off their fines even if they get decent jobs. I'm a little bitter about the jail system, since I'm a mental health worker who sees too many poverty stricken mentally ill people arrested on charges like loitering and panhandling. One guy in our community has a standing delusion that he is meeting friends at a certain business, and he spends most of the year in jail in one or two night stays. Although I have to hand it to the business, they aren't just persecuting him for his mental illness, he also doesn't fit in with the color scheme in the place, if you know what I mean. This type of thing makes a person cynical really fast.

Ahhh this post makes a lot more sense when you realize the photo of the luxury cell is actually a photo from the hostel formerly known as prison, linked to in the post itself...

It's not discriminatory to provide a greater level of protection for people who are at a greater level of risk. But why on earth should they be allowed to enjoy amenities beyond that of the rest of the population? You've given no LEGAL arguments, just some half-assed idea of saving money by embracing government discrimination which is justified because...the prisoners would discriminate anyway? Didn't your mother ever teach you that two wrongs do not make a right?

This might keep people from saying, "I want to kill myself," so they can go to the hospital instead of going to jail.

I'm not for luxury jails. It's going to cut into our patient census:-)
MJ