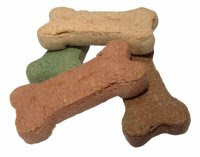 LOL. I was waiting for someone to say something about FD's enounter with dog-buiscuit eating children.

Actually, I have a friend who has a brother that is a high-functioning autistic kid. I saw him eating a tree branch on Sunday. now that, was weird.

My father and his friends used to pack Milk-Bones when they went out for bike rides during early adolescence, and he turned out all right.

Then again, in college he acquired the nickname "Weird," and it stuck. It also stuck to my grandparents, who became Mother Weird and Daddy Weird.

And people wonder where I get it from.

Hope that dog biscuits aren't next on the Menu Foods recall list. The proteins contained in these biscuits are plant and animal derived. Some examples of the animal proteins used are: poultry byproducts, bone meal, and dried liver meal. Also may have milk and egg. Well, it's one way to get a kid to eat liver, but not my preferred method. As for bone meal and all that, it makes me think about mad cows and as for poultry byproducts, whoo hoo, I don't even want to go there. On the other hand, these things are probably no worse than the frank, weiner, hot dog food group. At least dog biscuits contain vitamins (specially suited to a growing dog's needs)

Isn't pretty much all protein plant and animal derived?

I have to admit, I'm a little disappointed in you folks. Don't you have any scientific curiosity? (I did. I was curious! Bland and uninteresting tasting, but not unpleasant.)

Perhaps I should have said plant AND animal derived, as in: both types may be present.

It's not like I put on a bib and sit him at the table and present a plate of Kirkland dog biscuits. That would be wierd (though not as wierd as eating a tree branch).

He takes great pride in coming through the front door, marching to the kitchen pantry and getting the dogs their "cookies." It's a ritual. One day he tried a "cookie." He liked it.

On Saturday, he disappeared for a bit. Suspicious, I went looking for him. He sat in the pantry surrounded by "cookie dust." I estimate he'd eaten four.

So now we've moved the dog cookies to a toddler-safe height in the pantry.

To be honest, I don't understand what all the fuss is about. I got more "warning" emails from strangers on this post than anything I've ever written! :)