Thanks to the Sports Psychologist 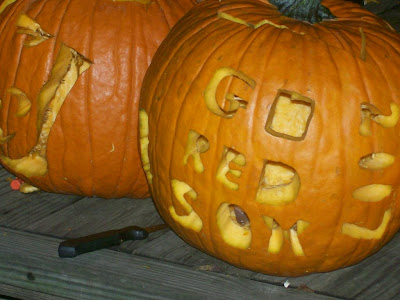 Note to Rach: it's now 24 hours since the game began. And you're officially hearing from Dinah.

I walked into work this morning and one of the therapists I work with at the clinic congratulated me. I was clueless. What? He wouldn't say. Finally, "The Red Sox." Oh yeah, them. I'm a bit sleep deprived, I have a banner hanging on my house, I've carved a pumpkin. Still, it's not the excitement that 2004 was (I'm sorry, remember I'm really a sports fan by proxy, I like the idea, I haven't gotten all thrill of a Real fan) back in the day of the Curse of The Bambino. And also, we've got the angst of a teenager trying to meet a November 1st deadline for some college applications, so I'm a little distracted. Still, I heard from friends in Boston, the boys in my house are a bit brighter, my daughter spent her day discussing Mike Lowell, and The RED SOX won the World Series!

So I went to check Curt Schillings's Blog, 38 Pitches. Mr. Schilling, minus the bloody sock, is feeling very thankful today. Since this is a mental health blog, I thought I'd skip where he thanks God, his wife, coaches, friends, neighbors, coaches, etc, and skip right to his gratitude to the team psychologist:

Don Kalkstein. Sports Psychologist. Hmm, is there a team or market more in need of someone like that than this one? Given the length of our season, the grind of the schedule, the market we play in and the other things that come with playing in a ‘win it all, always’ environment there is no doubt a need for someone not coaching, to chat with. DK is the goods. His dedication to the Dallas Mavericks is his only real vice (though it’s a necessity since he works for them I guess, but my Suns are still better!). DK is, after all is said and done, someone I would call a friend before anything else. He’s one of those rare people that makes you drop any and all pretenses about 8 seconds after you meet him and chat, about anything. He’s also Tito’s Fantasy Football bench coach and an incredibly horrid NFL talent evaluator……

So what does a sports psychologist do and can I have this job?

I don't seroquel will help. I've been sleeping better, but this issue of watching baseball games in Denver until 1 AM day after day gets old...

Sports psychs do this: http://www.torontomarathon.com/psychingteam.shtml --> kinda weird, but kinda cool too...

(word verification: yscubbao --> a sports shrink who specializes in scuba?)

EEK Mike Timlin thanks god alot too. Papelbon is just young and wild. And think about the job he has. Pure adenalin. Hey maybe I will order that hoody for the teenager. Love abf

One of the only things I like about CA is that all televised sporting events end by a respectable 9:00 pm, even when they occur on the west coast.

Oh, and you are much more eloquent than Mr. Schilling.

Was glad to hear that the Sox won, even though I really didn't care much once the Phillies were out, and I have personally always been a Cards fan ever since I lived in St. Louis! (The Phillies are gradually winning over my heart over the Cards the longer I live here - especially since I went to my first Phillies game ever this year. I just have to say though, it is REALLY hard to be a Philadelphia fan.....every single time we get our hopes up, we get crushed...! Story of my life in so many ways....no wonder I moved to Philly!)

Nothing to say on sports psychology, but I like your pumpkin pic and thought I'd share mine with ya. Jason and I carved our pumpkins last night. Mine is a bat (on the left in the photo) and his is a spider. I've actually never carved a pumpkin on my own in my life, and it's been years since I carved one with my dad! We used a kit that I got at Target, and I chose a level 1 design, and Jason chose a level 2 one. I wanted to make this cool cat design, but it was a level 3, and since I've never done this on my own and had to have Jason's help to even cut the lid out, I decided to stick with something easier!! hehe They turned out great, though, and I'm bringing mine over to Jason's house tomorrow night as we give out candy to the trick-or-treaters!! :)