Panic attacks are an acute, dramatic form of anxiety, including symptoms of shortness of breath, lightheadedness, tingling sensation, and fear of impending doom. One of the theories about the biological basis of panic attacks is the false suffocation alarm theory proposed by Klein, which suggests that the brain's sensor that detects elevated carbon dioxide levels is overly sensitive in some people, triggering panic attacks for no clear reason.

Eric Griez, a psychiatrist from the Netherlands, has published an article in the open source, online journal PLOS One, demonstrating further evidence of this connection (see also review in Science Mag). He exposed volunteers without an anxiety disorder to high levels of carbon dioxide, thus triggering the suffocation alarm at appropriate levels of CO2. 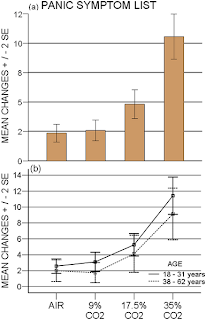 This falls under the what's-old-becomes-new-again category, as I recall this area of research 15 years ago. Still, it may be worth stirring up again, especially if it leads to more effective and safer treatments. In fact, Klein and Preter just published an amplification of the original theory, including evidence of involvement of opioid receptors in the response to the alarm being triggered.
Posted by Roy on Monday, October 08, 2007

Back in the good old days they used to infuse people with lactic acid to induce panic attacks.

If both CO2 and lactic acid can induce panic attacks, then are egg creams contraindicated in panic disorder?

Makes me think of air hunger in infants with bronchopulmonary dysplasia. Talk about panic....

Except a baby cannot talk to tell you, but you can see it in their eyes and faces... Sad, really...