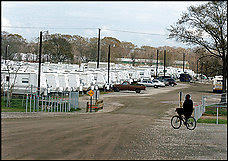 It's quiet here at Shrink Rap. I've been watching the sidebar poll on sleep meds (trazodone is winning) and ClinkShrink came over to eat pizza and hand out candy yesterday. I think I graced the trick-or-treaters with a "one for you, one for me" technique that left me with a very pleasant chocolate buzz. Roy is under the floorboards, or so I've been told. He'll come out soon, I imagine, to a burst of posts and I can't wait to hear how our podcast sounds with all the new equipment.

So two years ago at this time, I headed off to Baton Rouge as part of SAMHSA's Katrina Assistance Project. I spent two weeks there in what was a moving experience (read about it here), but somehow it seems so very long ago. So long ago, that I forgot about it until I was surfing this evening and came across a piece on KansasCity.com about storm victims who still live in FEMA trailers and how the rate of suicide attempts among trailer occupants is 79 times the national average. 79 times. Old news, I suppose, as it was reported in the Spring in the Annals of Emergency Medicine (not on my hit list) and Alix Spiegel, who's done a number of NPR pieces on Mental Health issues in Katrina victims, did a story on this back in August. See the the NPR story here. Coming across the KansasCity.com story, complete with photos of a trailer park, was a jarring reminder to me what was. Ancient history to me, but I sat in those trailers, talked to those storm victims, wondered if I was helping, believed then that their lives would get better. For all I know, all those people are in the same place, in the same trailers, struggling the same struggles, though I imagine when two months have turned into two years, the element of Hope gets lost. The rates of depression are apparently seven times the national average, and 79 times the rate of suicide attempts is hard to imagine. For me, I'm suddenly and unexpectedly revisiting images, feelings, people, that I hadn't planned on thinking about tonight.
Posted by Dinah on Thursday, November 01, 2007

Yesterday I caught the end of an NPR story about the harmful levels of formaldehyde in those trailers; some congressman was eating a FEMA representative alive.

I remember seeing the "news ticker" in Times Square as the number of victims of the Tsunami in Thailand rose beyond belief. Yet, it wasn't here so it was easier to emotionally distance myself. But it is just so difficult, in the most prosperous country in the world, to imagine that something so disastrous as Katrina could happen here. I must have watched Spike Lee's When the Levees Broke ten times, vainly trying to digest the enormity of the devastation.

I very much respect your intention and your offering in such a calamitous circumstance. I honestly believe that the good we do is hidden from us, and it is probably is for the best.

I really do admire the dedication you showed on your trip to the disaster area 2 years ago! I really wanted to go at the time (my hospital was sending people, but I think it was unpaid), but I was still on orientation as a new nurse and it wouldn't have been prudent to go down then! Not even sure I would have been much help as a brand new nurse who didn't know that much yet!

I'm completely dismayed at the state of things in NO and other areas affected by Katrina that things really seem not much better, 2 years later. Sometimes I wonder if our country completely forgot about those people.... And while our country seemed to forget about them during the actual disaster, the disaster was this huge thing that people had to find some way to get through. Now, 2 years later with so many promises broken and lives ruined, I can see how the depression would be so much more prominent and the suicide rate would be so high. So very sad.....

It must be heartbreaking to have gone down to help and see that things are still so far from what they should be.... I still think that you did a wonderful thing in going down there, and I'm sure that you helped a lot of people! I'm proud to "know" you!!

I saw the article this morning. It is so incredibly sad and devestating. I feel helpless and outraged that so many lives can be utterly destroyed in an instant and left without hope for what is turning into forever. It's times like this that I wish I were a multi-billionaire. There must be something that can be done to give these individuals fresh hope and a promising future. Or at least some well-deserved peace. Something?

98% of Rita funds unused The front page of the Dallas Morning News today says only 13 of 4300 Texas families have been able to secure funding for rebuilding homes destroyed by Hurricane Rita, which followed on the heels of Katrina. The money is there; are the elected officials so stingy they can't bear to part with it? It seems ironic that the very people who think something needs to be done about the "homeless" have the means to return a good number of these folks to their homes.

I can't even imagine living my life in a FEMA trailer for 2 years. Not only that but many of these trailers house whole families. I saw a thing on the news once about the trailers, and they're so small (and aparently infested with formaldyhyde, as foofoo5 says).

I think it was a great thing you did, putting your life on hold to help those hurricane victims. I also wonder why it is we can't get those people back into some sort of reasonably normal life. As a community and country, I feel like we've sort of failed them, and it makes me sad.

As I canadian, I Have such problems understanding the full extent of governmental problems that caused the victims of katrina to end up in the horrid living situations that they are now in.

But, Dinah, I do understanding that melancholic nostalgia that comes from remembering things that you don't necessarily want to consciously remember, even though you know they must be remembered.

It happens to me every April, around Holocaust Memorial day, when I think about 2003 - when I actually was standing at Birkenau 58 years after the conclusion of the holocaust.
That gut wrenching pain never goes away.

I just found a blog called ShrinkRap (lol) of a counselor in New Orleans.

When I read about her jogging and the violin man, how she took that in, somehow it reminded me of Clink.