JAMA has an article this week by Bankole Johnson, et al., showing the anticonvulsant Topamax (topiramate) to be effective in reducing percentage of heavy drinking days, from 82% in the placebo group to 44% in the Topamax group. 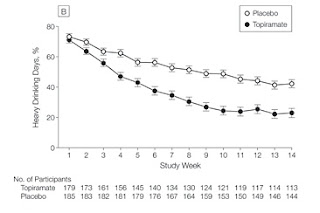 This was a double-blind, placebo-controlled, 14-week study, using 371 study participants. Dose range was 50-300 mg daily. Side effects included tingling sensations, changes in taste, loss of appetite, and impairments in concentration. Mean daily dose was 171 mg/day. They started with 25 mg/d for Week 1, then 50 mg/day for week 2, and increasing by 50 mg weekly (in divided morning and night doses) to the maximum of 300 mg/d.

This may be a good approach to helping some people reduce drinking, especially folks who might also have bipolar disorder, which is sometimes also treated with Topamax.

"Our study had 3 limitations. First, while the pattern of adverse events was similar to that found in our previous study,3 the more rapid titration was associated with decreased study adherence with taking the medication. Previously, when topiramate was titrated over an additional 2 weeks (ie, over 8 weeks rather than 6 weeks), retention rates were similar between the topiramate and placebo groups. Clinical sites least familiar with topiramate experienced more difficulties with retention, whereas completion rates among some experienced groups approached 90% (data not shown). We advise clinicians to use the slower titration schedule and to provide participants with focused education on managing emergent adverse events to maximize adherence with taking the medication. Second, as with most clinical trials in the alcohol dependence field, enrolled participants have to meet criteria enabling the conduct of a safe study. Because this cohort is often relatively healthier and perhaps more homogeneous than the general population of all those seeking treatment for alcohol dependence, our ability to generalize without restriction from this trial to clinical practice is limited. Third, this study did not have a follow-up period, so we could not determine whether, how many, and at what interval participants would have relapsed following medication withdrawal. Nevertheless, with respect to how people fare, on average, following treatment for alcoholism in a clinical trial, a meta-analysis of recent studies has shown that, even after a single treatment event, most can show substantial reductions in drinking up to 1 year afterward.

Our finding in this study that topiramate is a safe and consistently efficacious medication for treating alcohol dependence is scientifically and clinically important. Alcoholism ranks third and fifth on the US and global burdens of disease, respectively. Discovering pharmacological agents such as topiramate that improve drinking outcomes can make a major contribution to global health. Because topiramate pharmacotherapy can be paired with a brief intervention deliverable by nonspecialist health practitioners, a next step would be to examine its efficacy in community practice settings."

Is there any reasonable speculation on a possible mechanism and is there any possible tie to weight loss on Topamax, in your opinion? I'm wondering if there is some effect on drinking [and eating] related to the reward system, rather than reducing drinking via the sedative action of the medication.

My speculation is fanciful since I'm not up on the pharmacology of quite a few medications, including this one. Perhaps I've even framed the question incorrectly. Just curious about your thoughts on this.

I apologize for staying anonymous, but what I've got to say may get me in trouble.
As a practicing psychiatrist of many years my experience with Topamax and some other newer agent that are being vigorously pushed by the drug manufacturers (and with the shameless cooperation of an incompetent FDA) has been quite poor. It is no better than placebo, and may in fact act as an active placebo of sorts. What I mean by that is that the side effects are initially being interpreted by the patient as therapeutic effect. After a relatively short period of time it invariably disappoints. Just my two cents.

News of this was posted on the clusterheadache message board I belong to, and the responses were quite amusing. A few people made comments to the effect of, "Oh they forgot where they put the alcohol, and that's how it helped, right?" Or, "Well, they went to pick up the bottle opener and then couldn't remember why they had gotten it out of the drawer." etc etc... Made me chuckle.

I've stated my beef with topamax before. I know some people have received benefits from it... (Enough so that they even got it FDA approved to treat migraine!) but from the stories I hear about and the personal experience I even had with it, half the time I think the drug is hogwash. If I hadn't had at least 2 clusterbuddies who say it has changed their lives completely for the better, then I really wouldn't think it had helped any of the hundreds of people who I know have been put on it, but there are always a couple here and there that report success with it.

Anyway - hope this is really is true! Topamax is getting quite the publicity the past few years...!

Carrie, yes, I'm one who's been helped by Topomax (for migraine and for mood stabilization). Honestly, my mouth and brain are no longer connected, but I'm skinnier and stable, and my head doesn't feel like it's being hit by a large metal object on a constant basis... So I guess it's worth it?

Rachel- what do you mean your mouth and head are no longer connected?

I am a chronic alcoholic who was prescribed Topomax (100mg twice daily)for mood stabilization / bipolar. Funny thing is that while this med miraculously removed all cravings for alcohol for 18 months, and also caused a 90 pound weight loss - It absolutely destroyed my cognitive functions as well as exacerbated social phobias and depression. My personality changed so much that, while sober, I lost an Senior Executive level position in the Hospitality industry.
So - yes Topomax undoubtedly kept me sober.......On the other hand it destroyed my memory and my "base" personality.
I would love to talk further with mental health practitioners about this, but could find none in Atlanta who bought in to the "sobering" effect of this otherwise evil drug.
As a post note - Obviously I got off of Topomax. I have a horrific relapse 8 days later that lasted for 4 months.

my d's dr prescribed tobromax for binge eating. She suffered from anorexia and now she is starting to go the other way. She is now bingeing .Her bmi is normal now but he fears it will go up higher and higher .I am so scared of this drug after researching all its adverse affects. Plus she already takes prozac 60 mg for new depression /mild ocd and I am especially afraid of its cognitive effects ,poss. to alter moods inc. depression and brain fog. I dont know what to do she is only 19 and I dont want to suffer any more side effects. Somebody give me some help in making this decision?

By experimenting with my dose, I have determined that the 50mg of Topamax is indeed managing my migraine headaches, as well as stabilizing the Cyclothymia which was exacerbated by alcohol use & abuse to the point where I was originally diagnosed as being bipolar rapid-cycling.
I stopped my daily drinking after a bad experience with Depakote and Alcohol, and it’s rare for me to have more than one or two drinks a month, but during the time I’ve been taking Topamax, I seem to have become alcohol intolerant in a fashion. I didn’t have alcoholic cravings, but the Topamax + alcohol hangovers are not worth the experience for the few drinks enjoyed.
I do have (other) mild negative side effects of memory problems, trouble thinking, concentrating, or remembering things… Which keep me in a perpetually “stoned” state that my co-workers tease me for.
A poster had stated on 2/4/09 that it changed (even destroyed) his “base” personality. I do feel that this drug has the potential to affect our basic cognitive functions enough to alter the nature of how we respond to our environment compared to our life without it; but when it resolves other issues that are more distracting or damaging than the side effects … you either stick with it, or find a new drug.

I know I actually use Topamax to treat cocaine dependence. It worked wonders for me. I am also bipolar and alcoholic so it may have helped those too but I was mainly focused on the cocaine. I would be curled up in a ball, crying, I wanted to use cocaine so bad. My psychiatrist started me on Topamax and I no longer hardly even have using dreams. It's a miracle drug for me right now in my life. I will have four years clean off cocaine on February 10th, 2018. I eventually want taken off, because I feel like it's a temporary fix to a long term problem. I do follow a recovery program and am active in it.