CANVAS (The Movie): This is Mental Illness Awareness Week 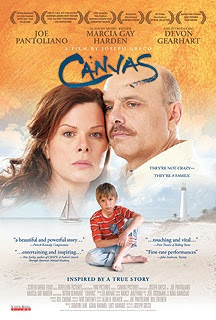 (from NAMI): Help CANVAS Fight Stigma This Week
Movie about a boy whose mother has schizophrenia — Spread the word about the movie, no matter where you live.

Just in time for Mental Illness Awareness Week (October 7-13), the movie CANVAS is being released in Chicago and New York on Friday, to be followed by three other cities next week. If Friday and Saturday ticket sales run high in these five cities, the release may expand to 200 cities nationwide.

Starring Emmy Award-winner Joe Pantoliano and Academy Award-winner Marcia Gay Harden, CANVAS is the story of a family's struggle with schizophrenia. It educates as well as entertains. It will build awareness about mental illness and strike a blow against stigma--but only if enough people see it. In order for the movie to reach a nationwide audience, please take action to help:

• Spread the word! Please spread the word now with a personal message to family and friends in the cities below—and friends elsewhere.
• Buy tickets on-line early each week. You don't even have to live in the opening cities. Tickets make great gifts or donations. Use the links below to purchase tickets online.
• If you live in one of the five cities, go see the movie on a Friday or Saturday. Take a friend. Go in a group. Hold a discussion afterwards.

Not that I clicked on it but you have an ad for Seredyn. Are you advising your patients to try this all natural remedy for anxiety and panic attacks with a 93 per cent success rate order now hurry hurry? You don't prescribe xanax but you will flog some "remedy" on your site all so you can make a hundred bucks for a mic? If you can't afford the mic, don't get it, live within your means, but stop with the ads for things you would never advise your anxious, panic ridden patients to send away for over the internet.Or would you?

Sarebear, the current notice under the ad was not there when Anon commented. I just updated the note below the ads from the previous subtle "this is just an ad" type disclaimer to a more glaringly obvious "WARNING!" type notice, for folks like Anon who might erroneously think that any Google ad on a site is automatic endorsement. As for the mic, it is something our podcast listeners keep asking for.

I was referring to the part about reporting objectionable ads by clicking on a link-word that says to for that, I could've sworn that part's been there for a couple days or more?

Oh, that part has been there since Day 1.

Yes it has been, but it hasn't worked for me. I am quite literate, thanks.
I don't erroneously think anything. That, for anyone who cares to question it, does not equate to not thinking at all.
I wonder whether a physician blogger would feel comfortable with ads for booze and cigs on his/her site, even with a big WARNING sign. It is only an ad, after all.

I am sorry for judging you, anonymous.

Not ideal for you since I suspect that doesn't mesh with your feelings on the Google ads here, but it's an idea, anyway.

I tried to be a one woman anti-stigma example to my co-workers and it didn't work.

I used to be pretty open about seeing a counselor and psychiatrist. I was open about my depression and anxiety. I felt comfortable working where I work.

When things took a turn for the worse, my co-workers got to see me get in trouble because of depression and anxiety issues. I went on disability leave.

I thought being open with my boss about my illness and how it was manifesting itself at work: lack of concentration, lack of motivation, excessive absenteeism...would get me understanding. At least, I thought, it counts as a "plain English" declaration of a disability for legal purposes.

Most of my co-workers were pretty good about it, even picking me up and taking me to lunch on my birthday which ocurred during my leave. Some treated me like the plague. I was shunned by some. I felt shame and humiliation. I am amazed at my resilience at coming back and doing my best to get back on track. I wish I could say someone helped me, but it was all me.

I do have a best friend I am lucky to have. I really like the "what a difference" mental illness campaign. I can relate.

People don't want to know. If you tell them, they don't want to hear it. What about this recent shooting by a fourteen year old? People knew or had reason to suspect but they didn't do anything. Now they will look to blame anyone EXCEPT look at themselves, especially the ones who knew this was going to happen.

Most people are sheep. They go through life following the other sheep. They don't want to think outside their sphere. They can't or won't understand, just like the hospital workers who never could hide their distaste at having to deal with and ODer.

Of course, these are MY opinions.

The pain you feel in your heart at being an "undesirable" is impossible to put into words. I'm glad I can't cry anymore or I would be.

To post a comment about the movie...I actually just saw it tonight in North Scottsdale. I wasn't sure what to expect because I hadn't even heard of it, when I got invited to go see it. It turned out to be an amazing movie. I cried through almost the entire movie. The little boy (Devon Gearhart) was just spectacular. I highly recommend this movie to everyone. But, if you have a soft heart, take tissue..lots of tissue! :)