My Three Shrinks Podcast 36: Just Do It

Folks, we have heard your requests for us to upgrade our sound quality. That is coming up, probably in Podcast #38. Yes, the Google Ads have paid only about 5% of the cost of the upgrade, but we may keep them on the site until they've hit $100, as I believe that is the minimum for a pay-out ($19.05 for September). 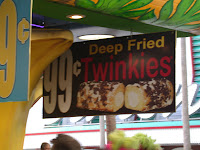 Coming up in Podcast #37... SSRI Poop-out (aka tachyphylaxis) and other good stuff. Oh, and here's a pic from my Vegas conference trip. Yummy!

Just the thought of deep fried twinkies make me nauseous. Haven't listened to the pod cast yet.

I look forward to the tachyphylaxis piece. It seems tough to develop a cause and effect here with existing data. One obvious place to start would be a longitudinal DMPK study (metabolic adaptation), but I haven't seen any such studies. Incomplete nosology probably also interferes with inference.

If we assume depression to be ecological, and that SSRIs improve a patient's disposition, writing this down to a worsening of the condition seems somewhat questionable. A placebo effect arising from the social experience of a doctor visit (many of these patients are truly isolated) might be a worthy hypothesis for some cases.