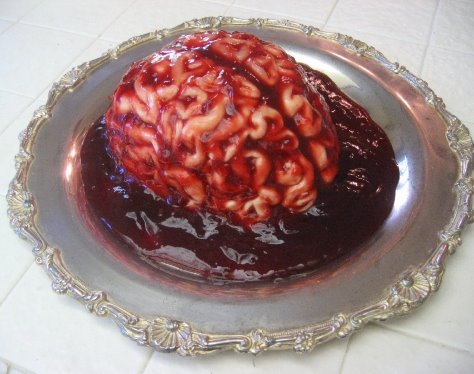 I looked through Google News today to see what is happening in the world of "brains." Here's some of what I found . . .

* * *
A study came out recently in the journal Emotion reportedly showing that people identify fearful faces much more quickly than other faces. Makes sense. Apparently, the wide-eyed stare has a lot to do with it.

'The team found people became aware of fearful expressions much faster than neutral or happy faces. "We were seeing it pretty much universally," [David] Zald said.
He thinks it has something to do with the eyes.

"If you compare the amounts of the whites showing with a fearful face versus a neutral face, the difference is really quite striking," he said.'

So it's the whites of the eyes that do it. That explains the popularity of the runaway bride story a few years ago.

* * *
Of course, women are probably even quicker at this than men, because, as everyone knows, women have a much bigger crockus than men. What? You don't know your crockus from a hole in the ground? Maybe you missed that class. Or maybe you are just feeling empty-headed today (then maybe this belongs to you).

* * *
"First Successful Treatment For Chronic Traumatic Brain Injury In Rats"
This is great. We can't get funding to help find better treatments for people with traumatic brain injuries, but we now have a good treatment for rats who have had too many encounters with a broom handle.
* * *

Tech.Blorge is reporting that it is now possible to directly control your Second Life avatar with a brain-computer interface.

"Sometimes you look at a friend and could swear they're directly connected to the computer. New technology could soon make that the case. Professor Ushiba of Keio University has unveiled a brain-computer interface (BCI) that allows users steer characters with their thoughts, reports pinktentacle."

Email ThisBlogThis!Share to TwitterShare to FacebookShare to Pinterest
Labels: brain

.... we now have a good treatment for rats who have had too many encounters with a broom handle.

Serious point I know (and not taking anything away from that) but, Roy, you always make me laugh out loud and I'm always appreciative of that.

I only read the article down to the first couple of auditory hallucinations, and stopped. I don't need to be giving my all-too suggestible self any ideas, not that those have been my experience or anything. They also warn people with any family history of mental illness not to enter that building in Second Life.

"the building contains a closely researched recreation of visual and aural hallucinations, based on interviews of real schizophrenics. Baldwin transplanted the simulation to Second Life's public continent, to give residents a chance to try it out, and to collect their feedback afterward (there’s a survey-taking device at the end of the tour), and as I first watched residents enter the doors, yesterday, I wondered if they’d feel the same kind of terror I did, last month."

I'm not a Second Lifer, but I do know various universities etc. have presences there, and some conduct distance learning classes there (I guess studies showed it as being more effective than other ways or something?)

Anyway, I saw this written up on Boing Boing and other places a while back.

hp, thanks. I'm glad at least one of us appreciates my warped sense of humor.

sara, sounds almost like the Voices experience that one of the drug companies (Pfizer? Lilly?) uses at trade shows and doctors offices to simulate the experience of hallucinations (someone trying to get on a bus and respond to the busdriver while random derogatory voices yell at you).

That would be rather disorienting, at the LEAST!

Me, I'm working doing a sterling silver wire version or using precious metal clay (that fires to fine silver) to make some neurotransmitter necklace centerpieces - if I'm particularly distracted that day, I'd wear one of the ones that has to do with that (lol . . .) Using 2-d representation of the chemical structure of the thing.

I'm wierd, but I was pleasantly surprised to see I wasn't the only one who came up with the idea. I've been trying to figure out how to make a sterling or fine silver brain, and do some small speech/thought bubble charms, the speech one saying "Talk is cheap" and dangling on the left side of the brain, a bit up the necklace from it, and on the other side, the thought bubble, thinking, "But I'm Not".

Ie, talk is cheap, but therapy isn't. Several meanings there . . . therapy isn't CHEAP, it has VALUE, therapy's WORTH to me, etc.

If one is going to quack up, where better than at your blog (hee hee quack quack . .. !)