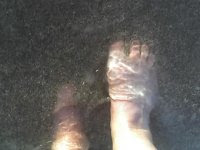 This is my second annual blog post that summarizes my experiences at the forensic conference I attend every year. Last year I put up a three part "What I Learned" series, which I occasionally go back to when questions come up and I know I heard something about it once but can't remember the details.

PHEW. And that's only the first day. Here's the other thing that I learned:

I love eating lobster while watching the ocean. Beats the heck out of working in prison.
Posted by ClinkShrink on Friday, October 19, 2007

Thanks so much for calling into the show tonight. It was a great time. I'll have to delve into these bulletpoints a little more. I may comment again later...

Wow! Sounds eventful for just one day!! Staring at the ocean at any time is much better than working! In December, I'm going to Florida for a conference myself! Can't wait!

What is Sick Building Syndrome? Is that like how at my mom's old school, they have an unusually high amount of breast cancer cases? OR is it more like my theory that my headaches are made worse by something at work, even though I can't quite determine what that something is - and lots of people at work say, "it's the air in here." hehe

Problematic internet use? haha.... I wonder what proportion of bloggers (or former bloggers like myself) are considered internet addicts? One of my compulsive habits is checking websites that I read a lot - sometimes it keeps me up for hours at night. Horribly annoying, but I...can't....stop! There's just so much to learn! :)

Sick Building Syndrome really isn't a medical diagnosis itself, it's a slang term for building-related illnesses. The actual diagnosis would be the asthma or bronchitis or whatever illness is made worse by bad environmental conditions. The interesting thing is when people with no defined or identifiable diagnosis insist they are sick and that it's the building causing it.

Um...Wow. That sounds like an amazing conference. Great blog.

Vaginal Plethyseismography is only slightly more reliable than a coin toss.

The data I've seen on detection of known paedophilliac offenders vs a control group had a 40% success rate, compared with random chance of 33%.

The reported results from Blanchard et al. at the (former) Clarke Institute in Toronto have not been repeated anywhere else.

Does Sick Building Syndrome correlate with Feng Shui? If the "building is sick", the people suffer in various ways determined by where the building is "sick".