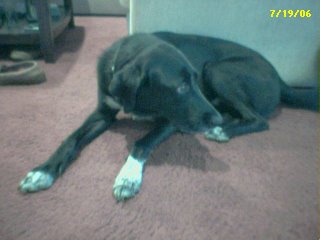 My husband keeps telling me that Max wants to be on the blog. Actually, he often tells me that Max thinks, feels, or wants many things. When I ask him how he knows, he responds with certainty, "You can tell."

From my perspective, it seems that Max wants a limited number of things:

That's it for what I know that Max wants. He's never mentioned any interest in the blog to me. I'm hoping this will be some sort of dream come true for the dog, or if not, then perhaps for my husband.

Judging by the amount of chasing and bribing it took, I don't think Max wanted his picture taken today.

If he took the bribe he obviously wanted to be on the blog in some sense. Chances are he'll have trouble seeing it at the refresh rate of your monitor though. Anyway, as a psychiatrist you should know one isn't always so enlightened as to want something one needs or which would make one happy. If you aim to please and control Max, you'll probably need to consider more than just those wants you can deduce and attend generally to his mood and his emotions. You're a lot more rich in data about Max's personality ("dogality?") than you suggest with that meager list of wants.

I apologize in advance that the link is for subscribers only (maybe you're lucky). I remember reading a story in the Atlantic Monthly (as it turns out in 1999!) called The Truth About Dogs. This is not a magazine I would otherwise read, but the cover had a dog being "served" by his/her master. The gist of the article is that it is only by anthropomorphic ascription that we believe demonstrations of "herd behaviour" to be canine thoughts & "emotions" (it is a whole lot more instructive & amusing than my summation, I promise). I recall having had an hilarious argument with a friend (an Assistant District Attorney, no less) about the fact that her dog "loves" and "misses" her. Needless to say, I found her much more effective in court. Personally, I enjoy dogs, but that whole sniffing each other thing...

For those of you who haven't seen it yet, I highly recommend the picture on one of Fat Doctor's posts this week:

Tell Max that Ygorski is inviting him over to dinner tonight. He's making broiled tuna.

Max doesn't do fish.
He might, however, eat Ygorski; after what he did to the rabbit, I've never given him unleashed access to a cat.

"Anthropomorphic ascription" is largely what we use to read other people even while they're jabbering. You think human toddlers know nothing of their parents' feelings before they can recite Goethe? Anthropomorphic ascription works pretty well for dogs too in my experience and as validated by my ability to control my dog's behavior. Given our recent common descent (we're all mammals) and many instances of parallel evolution in highly diverse social animals, it's hardly a surprise that it does. "Anthropomorphic" is sort of a misnomer.

"[It's] exceedingly likely that any animal whatever, endowed with well-marked social instincts, would inevitably acquire a moral sense or conscience as soon as its intellectual powers had become as well-developed, or anything like as well-developed, as in man."

Charles Darwin, as quoted by philosopher Mary Midgely, according to an Amazon customer review of one of her books. Just to point out this is not a radical perspective I've offered. At least not radical for a century or so among biologists.

NeoNurseChic said...
This comment has been removed by the author.
July 20, 2006

Murky, it's not a radical perspective at all. Quite fun to think about, actually. I really got into this in high school and as an undergrad thanks to Stephen J. Gould.

I see anthropomorphism as the inverse of sociobiology. If anthropomorphism means giving a moral explanation for innate instincts or behaviors, then sociobiology is explaining what appears to be moral behavior in terms of the "biological best". I guess the question then would be, from a sociobiologist's perspective, what possible genetic advantage could Max get by making sure that Dinah knew what he wanted? Particularly after he's already been neutered? (Sorry Max if that's too personal to blog about. But I think most people would have guessed anyway.)

Domestic dogs and especially the pure breeds are very "artificially" and not much "naturally" selected, so neutered Max has a loophole and need not answer for himself. Actually in a way dogs may be telling us what's innate through behavioral genetic studies underway. Dogs are perfect for this research, because personality or "temperament" is a big element of what generations of breeders have been selecting for, and there's a wide diversity across breeds. I'd quibble about sociobiologists looking for the biological "best"...and actually I think Gould's would be with me (see The Spandrels of San Marco and the Panda's Thumb--I think this quibble was a hobby horse of his).

Our Shui Tzu "Elmo" wants me to protect him from the computer's UPS. Every time there is a power failure it beeps 3 times to tell us "there's been a power failure." Like we didn't already know that ...

At any rate, Elmo is firmly convinced that UPS's eat little dogs. He tries not only to get on a lap, but to get under whatever we're wearing. It's real terror; he's shaking and shivering and whinning and ...

When I reorganized the office two weeks ago, the UPS was out in the open and Elmo was hiding. He actually tried to hide under our NA shorthair cat "Binky."

Actually I think what's frightening Elmo is the thought of global warming. Is your power grid mostly coal driven? If you switch to solar I think you'll notice that outages and the UPS stop causing Elmo to freak out.

Max is a mutt from the pound and his sexuality is none of anyone's affair.

And here I'm thinking anthropomorphism, from the Greek anthropos, literally meaning "man," but underdstood as "human," and morphosis meaning nature, means ascribing/attributing "human nature" (or its characteristics) to that which is not human. That is the point of the article. Likewise, the article has a lengthy discussion of the terrible consequences of "pure breeding" by increasingly limiting the genetic pool (e.g. hip dysplasia in beagles and deafness in dalmations). And for all I know "Max" could be short for "Maxine," and I respect Dinah for protecting Max's privacy.

I think I see the next Christmas gift craze: Freak Me Out Elmo, the transgendered phobic plush toy.

And you thought ducks were wierd.

foofoo5, are you offering that etymology to defend against my assertion that "anthropomorphise" is sort of a misnomer? What I meant was that it implicitly labels "human nature" feelings or motives that may not be specific to humans. I'm saying the nature of humans isn't "human nature" in every sense of that term, which even religious people use and which I think connotes a view that people are special and distinct from animals rather than being animals ourselves. I guess I can be a little cryptic at times.

murky thoughts: Here in Ontario most power generation is from nuclear.

The problem we have is one common to all rural areas: brownouts during thunder storms. Lightning strikes cause momentary grid overides, which in term drive the grid voltage too low ...

Even those "off the grid" sometimes have the problem due to the power dump-pile or being attached to the grid (for power sales).

My thinking is that Elmo is afraid of the beeps because of where he came from: We rescued him from a puppy mill, where he was a breeder ... I think the puppy mill owner used a cattle prod on the dogs. Cattle prods, as they charge, make a very similar noise to the UPS. The one smoke detecter also makes a similar beep, he is also terrified of it.

I LOVE when you can just really FEEL what a dog wants. This last winter, as my MIL's dog, Bear, was exhibiting signs that he'd probably need to be put down within months or less, I started giving him full-body massages/scritches.

You shoulda seen the look on his face, in his eyes, and his body language when I'd pause . . . He LOVED this!!! The fur would literally fly . . .

This was also good therapy for me; a very sensory thing that was calming and distracting.

This was also my way of thanking Bear for what he'd given to me, and my way of saying goodbye. My FIL seemed put out by the need to vacuum wherever I had done this, but I stood up to that because I knew both Bear and I NEEDED this.

I feel that it helped me grieve after he was euthanized in February.