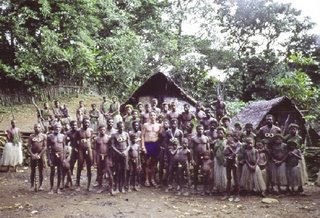 My Dad was a ham radio operator. When I was a kid I sat on his lap and listened to him talk to people in exotic far away places like London and Germany and Iowa. He exchanged QSL cards with them, postcards that had radio call letters printed on them and short messages from the people my Dad talked to.

I think that's why I'm so fascinated by the range of people all around the world who stop by to read this blog. When I write something I get curious about how people from other cultures relate to what I'm saying and what they think about it. I want to ask questions and compare experiences. Today, in honor of all those readers from "somewhere else", I am going to dedicate this post to the smallest country ever to visit Shrink Rap: Vanuatu. Today is Vanuatu's Independence Day.

According to the CIA World Fact Book (does anyone else find it disturbing that the CIA keeps records on all this?), the natural resources of Vanuatu include manganese, hardwood forests and fish. It has active volcanoes and beautiful lagoons that inspired James Michener. It has typhoons, earthquakes and tsunamis. You can get some very nice real estate there too. I think we have much in common. We at Shrink Rap live near a beautiful harbor. We have natural resources like crabs and Old Bay Seasoning and the Orioles (American League champions in 1969 with 109 wins and 53 losses). We have natural disasters like tropical storms and floods and movies filmed here starring Meg Ryan and Kevin Spacey. And the Orioles (54 wins, 107 losses in 1988).

Tying all this in to Shrink Rap, I need to mention that Vanuatu also has at least one prison that houses all of 50 people. It looks like you all are working some new reforms over there, and that's exciting. I wish you the best of luck on your new Correctional Services.

And don't forget to stay in touch. 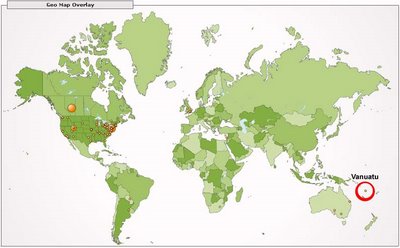 Sweet post... the pic of the natives however, I threw into your draft as a joke, I'm not so sure they really are in Vanuatu. I do wish I'd been there when you'd opened the post and found it. Did you wonder if Roy had added it? The country, by the way, has been voted as having the highest Happiness Index. I think this means that all 200,000 of its inhabitants live on a diet of chocolate brains. Very little concerta, I'm willing to bet.

I take it for granted that any odd picture I find on my posts are from you...I left it up anyway because it has nothing to do with our fair Charm City and it relates to far away, exotic places. I wonder if you can get kuru from eating chocolate brains.

I would note, Dinah, that Clinkshrink's link to a photo of the delegation visiting the prison in Vanuatu appears to depict all Caucasians. If fact, everyone on the Vanatu website is Caucasian. Perhaps you meant something more like this.

I added the map showing where our hits came from around the time that we got our first hit from Vanuatu.

Here are some real pictures of Vanuatu from Flickr.

Nice touch with the map, and I stand corrected. 98.5% Ni-Vanuatu Melanisians. Did you know the 9th season of Survivor was titled Vinuatu: Islands of Fire? I seem to have missed it...

Was going to make the survivor reference, but foofoo5 beat me to the punch. Nice history lesson.

Ok, maybe Freud was right and everything IS about sex. Ha!