Why I Hate In Treatment 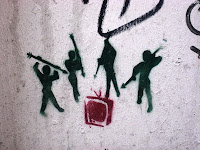 Dinah, I still love you even though you ignore my opinion and write about In Treatment.

A while ago Dinah wrote about why she hates the television show House. I didn't have strong opinions about the show, I had only watched a few episodes and I thought they were OK. If Dinah hated it and wanted to blog about it that was cool with me. So now, I'm taking my turn.

In the interests of full disclosure, I'll tell you first that I've never had cable TV. Not only that, but since about last July I haven't had a television. I really haven't missed it. I've been to places that had cable TV and what I saw just reinforced the idea that there was a lot of content that just wasn't worth watching. I spent more time channel surfing than viewing. So that's my disclaimer. (I watched the first week of In Treatment on the Internet.)

In general I think it's a bit unsettling to be immersed in TV culture. I notice it more now that I'm not part of the American "viewership", but it feels odd to go somewhere and listen to people absorbed by characters who aren't real and life stories that don't actually exist. I mean really, there are earthquakes and wars and important international events going on and we're wondering who is going to get voted off American Idol? Don't we have real issues to talk about?

As far as the show specifically, I don't like it because it's neither treatment nor is it therapy. Face it, the guy's a goofball whether he's a psychiatrist, a psychologist or a licensed angel adjuster. If you're going to be that far off base from reality you might as well write a show around the complicated dysfunctional relationships between an auto mechanic and his customers. (Oh wait, there was that Taxi series---that's pretty close.) It's too laughable to be drama and too self-important to be comedy. Like I said when it first came on, I'd rather have a more realistic series about seriously mentally ill folks making their way in the world than a gossipy pseudo-introspective contrivance like In Treatment. Dinah didn't like House because the doctor was obnoxious and the show wasn't realistic. Oddly enough, the same reasons I don't like In Treatment.

I'd even prefer blog posts about ducks.
Posted by ClinkShrink on Tuesday, April 07, 2009

Email ThisBlogThis!Share to TwitterShare to FacebookShare to Pinterest
Labels: clinkrants, In Treatment

"but it feels odd to go somewhere and listen to people absorbed by characters who aren't real and life stories that don't actually exist."

I call this English class.

So far I've successfully avoided watching In Tx. Watching just about any Hollywood shrink makes me cringe no matter how gorgeous they are (Gabriel Byrne, yummy). Problem is when a patient watches it and expects me to understand the references. This was more fun when they were talking about the Sopranos.

I'm with you. I watch an hour or less of TV a week, and usually what I watch are old M*A*S*H reruns or something on Cartoon Network. I don't miss it.

When people talk about the latest LOST episode, House, American Idol, etc. I just don't get it. I do not see the appeal and honestly I do not care what happens. I've gotten so out of practice with watching TV that if I sit down in front of it I am usually bored in about five minutes.

Despite what anon. said, books just do it better for me.

With all due respect, I just can't imagine anyone following "House, Urologist": "Get his urine, STAT!" The conventional wisdom is that ER docs know a little about everything, and a lot about nothing; orthopods are strong as oxes, and just a bit smarter than one; and when you can't cut it in medicine (but still have the student loans), you turn to psychiatry. Imagine, keepers of the human psyche! As Animal Mother said in Full Metal Jacket,"We're like green giants walking the earth." Oddly, our demographic actually experiences the TV speaking to them...

I'm going to have to work my way through the posts on this show from the beginning - did they put the full episodes up for the first week or two like last year, on the net? I'm probably too late for that now anyway . . . . But Dinah recaps really well so I'm set.

I do understand when one dislikes/mislikes a show, tho.

On House, I've got a like/love/hate thing going on. He's gorgeous, but he sucks.

When they had the Mormon character on, I hated how he treated him, but I noted that he was consistent in how horrible he treated him in the same ways he throws out religious and other bigoted and crappy and obnoxious, crude, and lewd rude and socially inappropriate remarks around. So, I noted it was consistent with the character. He was treating him the same as anyone else, and not treating him badly JUST BECAUSE of his particular religion - the religion happened to be one of the things he could pick at, but it didn't really matter to him at all.

I was still offended though, as I am on behalf of the other religions, etc.

I continue to watch, because I think they use him to show that such behavior is unacceptable (well then why does he still have his job? he has had to deal with a variety of consequences, especially personally . . . . . .)

That, and I think Foreman killed what's his name that I feel really badly I can't remember the name of. A shocking twist.