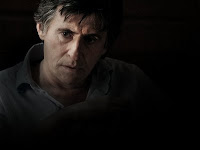 Oliver and his parents present for family therapy. Only the family has split and Oliver prefers the company of his over-solicitous mom. There's not much to say about the session-- looks like a family session to me. Paul does nothing too unusual, and family therapy is hard. There are many agendas and many subtexts, often an overwhelming amount of material to deal with.

So far, what we know is that the personalities are all strong and the issues are complex. Mom makes the point that dad is irresponsible. He plays Wii with his friends and parties all night and he doesn't stock the fridge for his son. Dad makes the point that he makes the bucks and Mom is a perennial student--we've already been set up for the idea that the face one puts on may betray the reality of the behavior. Mom hovers, she moves too closely to the boy and doesn't even suggest he carry his own backpack, and Oliver sucks it up and plays the two of them off each other. It will be interesting to see what comes of the family.
-----------------------
Walter is a big-shot CEO in a cashmere coat, or so he tells us. He can't sleep and he wants his problems solved quickly, even if he has to pay more for more intensive sessions. In fact, he seems to magically want Paul to know what the cure is without being very forthcoming about what the problem is. Walter seems to want to spar with his new therapist, and he's quick to be condescending. At some point, he becomes downright angry when Paul doesn't agree that Walter should rush to Rwanda and 'rescue' his daughter who is working in a clinic. Walter begins to leave in a huff-- he came for relaxation exercises and an insomnia cure, not to talk--when he falls to the floor clutching his chest. Paul tells him to breathe (finally!) and gives him some water. No one calls 911, and Walter tells him, in a gasping, pathetic sort of way, that these episodes always resolve.

Walter's persona is too overtly grandiose-- I can't help but wonder if his blowhard narcissism isn't a defense for an underlying insecurity (--there, I'm finally sounding like a real shrink!). What isn't he telling us and what secrets are still to be had. So Walter-- insomnia, panic attacks, is he really as important as he tells us? An edge of paranoia? And, okay, I admit, the 'bipolar' word crossed my mind when he talked about taking a one hour nap and then being good to go for 24. There's energy and there's Energy. Too soon to tell.
------------------

Paul returns to Maryland to see Gina. She's being deposed in his lawsuit. Paul had decided he's going to lose his license and go bankrupt. And, oh, "I've decided I'm sick of sitting in a chair day after day listening to peoples' problems." We find out that Paul's office is in his apartment and he sleeps on his couch and never sees his kids. He's a disaster, and he confesses that by the end of his patient's therapy, he hated Alex. He's come to Gina for clarity. They have a drink and a lot of ground is covered.

Walter begins to leave in a huff-- he came for relaxation exercises and an insomnia cure, not to talk--when he falls to the floor clutching his chest. Walter tells him to breathe (finally!) and gives him some water. No one calls 911, and Walter tells him these episodes always resolve.

Dinah did you mean that Paul tells him to breathe and gives him water - and then tells water that the episodes resolve??

edit - tells walter that (after he drinks water) that the episodes resolve...

(I need a vacation)

Thanks Rach, got it!