In Treatment Without Boundaries: Paul Gets Sued 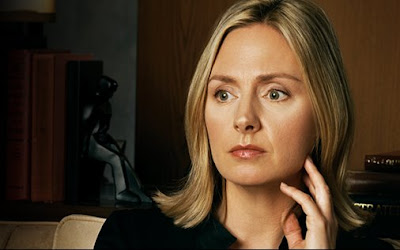 The season opens-- Paul, now with too-short hair, unshaven and in jammies, opens his door to Alex's dad. Dad is angry that he's lost his son, the pilot, and says Paul should have told the Navy he was unfit to fly. He wants Paul to suffer: here, have a subpoena, you're being sued and Dad is hand-delivering it.

Lawyer's office, Mia in a Prada suit. Paul is surprised, it's not the male lawyer he thought it would be, and we're led to believe this is one of Paul's old girlfriends, he's clearly uneasy. We learn he's 53, now divorced, moved to NY, and he has an MS and a Ph.D-- somehow I thought he was a psychiatrist, but now we know he's a psychologist. Also, I thought his diplomas last season were from the University of Pennsylvania, but those aren't among the schools listed. Oh, and Mia keeps getting disrupted during this very important meeting-- a call from her father is put through where she tells dad he looks great in green, and a colleague bursts in to the session. Nothing feels sacred here.

Paul acts surprised when he hears the term "malpractice" and it's news to him that Alex's death is being construed as a suicide. And now the episode gets interesting. Paul hasn't sent his clinical notes, ah, he doesn't take notes. That could be a problem. Is it better to be a bad therapist who takes notes then a good therapist who doesn't, he challenges Mia. No one's told Paul that it's best to be a good therapist who takes notes. I'm not sure of the rationale for never taking notes (and that is what he says, he Never takes notes). And it gets even more interesting when we learn that 20 years ago he did take notes, back when he was Mia-the-litigator's therapist. Ah, he left her precipitiously when his family moved and she felt abandoned. He's sorry she felt abandoned, and she jumps right on his words...you felt abandoned, and he seems to have forgotten the details of her distress, of the gift she gave him, of how hurt she was that he never contacted her. Therapists do sometimes if the patient is special. We feel her pain, we watch Paul squirm, and the tables keep turning all episode as to who is grilling who. Mia asks Paul some questions that leave him feeling defensive, angry, and like some of thse strings might go pop at any moment. Mia then gives him an earful on the loneliness and pain of her life. It could have been prevented (we're left to wonder why) and while they both agree this is a bad idea (No? ). Mia gets the final satisfaction of telling her long ago abandoning shrink that his time is up and she has another client. Touchée

It's like everyone here is naked. The therapist is thrust in a room with his former patient and it's not what he wants. She reassures him it's okay, but we know it's not okay. She asks how a patient leaves treatment (Alex) too soon, and we hear the pain of a therapist leaving when a patient still needs them. You're left to wonder: can a therapist force someone to remain in treatment (generally, no) . And is there ever a way for a therapist to depart without causing angst. People move, but somehow I have the sense that Paul could have done so with more sensitivity.

Back with the next episode shortly.

I think some of that personal stuff "everyone is naked" is just a weird translation of the culture here - where everyone DOES know everyone else's business and are very emotionally expressive.

Wow. Just wow. The things that some lawyers will do for a billable hour are so mind-bogglingly wrong on so many levels that it's hard to know how to begin. And to think, she probably charged him costs for the kleenex she used sobbing in her office afterwards. Hell, she probably used a few and then charged him for the whole box. Lawyers really need to get their professional house in order.

That one was for you, Roy.

Oh MY> How I wish I could have SEEN this.

It just sounds like it is wrong from he steps into her office and sees her and UH OH and downhill from there OOPS eeeeeeeeeee.

Great job, Dinah!! Makes me wonder what happened off screen, "between seasons".

The new-second HBO "In Treatment" series presents a variety of complicated and interesting ethical dilemmas. So far (i.e., week four of the second season) all of Paul's boundary crossings seem to be clinically-driven and ethical. The original comment is correct, not taking clinical notes, in today's standard is sub-standard.