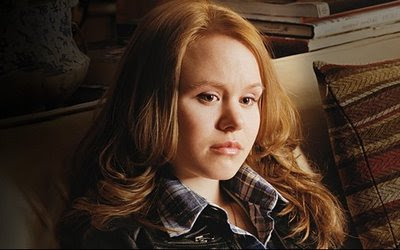 April enters and we're struggling to figure out what she's doing here. She asks a lot of questions, and she offers information, but what's she doing here? Paul reassures April she can't offend him. "I can't?" "Well, of course you can, but I can take it." Oh, can I try? It was a funny thing to say.

April tells us about her last imperfect therapist who told her the same insignificant story twice. April left the treatment without calling and "the woman was borderline stalking me...second of all she was an idiot." April tells us right off that she can't take being pushed. She tells us she wants to be listened to, and Paul's wasting her time asking about her last shrink. Finally, they come to a calmer place and she has to write down her chief complaint, it's just too hard to say. April has cancer, she doesn't want to talk about it, she just wanted to tell someone. Lymphoma.

April is angry at the medical care she's gotten, she feels like a specimen. She hasn't told her parents. Or anyone else. April is angry with the treatment world. She's not sure she wants treatment and she wants to think about alternative therapies. And then Paul says something nice, he puts April's difficult demeanor in to a nice perspective: "You seem to be a very independent person."

He gives her a list of what she should do: talk to her oncologist, tell her parents. She leaves in a huff without scheduling another appointment. "I'll call you." And we think she might not.

There's not that much to say about the session. Paul has a history of pushing patients a little too hard (if you ask me). This is a difficult patient and we don't know if her anger is part of her, or an acute response to a horrible stress. We do know that, at least for now, she's quick to judge and feeling terribly vulnerable. She pushed Paul by asking about his decorating, why he's moved...and this time he crosses no boundaries.
Posted by Dinah on Sunday, April 05, 2009

Clinically, I don't think that Paul pushed April too hard during this session. He has only a few minutes to ally with the part of her that wants to live, and as a psychologist he must do this therapeutic joining succinctly, accurately, and with integrity. Paul has already demonstrated his ability to meet April by solving the "riddle" of the 'twice told joke.' He also reinforced her deep need for independence and autonomy. She does not want to be out of control like her autistic brother.

Paul understands and reinforces April's urgent need to start discussing treatment options for her stage 3 cancer. This urgency is also understood by one part of his client (her father is a doctor), although, she also wants to deny the gravity of the diagnosis. As a therapist, Paul has to achieve a therapeutic alliance with his client while showing her that he understands the gravity of the situation and the need to act swiftly on her behalf.

What I latched onto was the description of April's parents: her father is an Army doctor who is overworked at an understaffed VA hospital; her mother is busy caring for her autistic brother. I would think her "independence" is driven by the need to not burden her parents, who sadly seem to have no time for her.

Yet she must be angry about her parents' inaccessibility/"abandonment," which seem to be reflected in her many critical comments about others.

Anon: Yes, I agree, you should have a blog!

Ya-el: I agree with your comments about the urgency of April's need for help-- her psychological condition is turning into a fatal problem. I'm not sure I agree that Paul met her and formed an alliance--I thought perhaps she wanted her distress with the last therapist confirmed-- an agreement that therapist shouldn't have told the story twice-- and that by constructing it from the therapist's side April might feel sided against-- this is always a hard line to negotiate, but in the first session, alliance is key. I'm guessing he didn't push her too hard, because I think she has to come back for the plot to work, and that's the real measure.

Last season I felt like he pushed people when they were screaming out him that they weren't ready-- an in-office overdose, a fist-fight (or was it a near fight?) with a patient over a girl, a couple who fight mercilessly and the wife miscarries on Paul's couch...