In Treatment: The Rest of Week 2 of Season 2 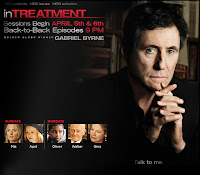 The turtle is in a pie dish on the microwave and daughter, Rosie, is visiting for the night.

Cashmere Walter returns, and this time therapist Paul has dressed up for him. No jeans, and he wears a vest and jacket (Walter still doesn't warrant a tie). Walter talks about his company and his symptoms, which Paul has now labeled panic attacks. We hear how they started when Walter was a kid, and how his GoldenBoy brother drowned, right before he was to begin college at Yale. There isn't much to say here: it's a therapy session. Walter pays at the end, it's cleaner that way, he says, then waiting until the end of the month. We're left to wonder why Paul looks so stressed when Walter leaves. Next time, perhaps.
----------------------
Paul goes to see Gina and it's busy in her waiting room. His ex-wife is lurking with the kid's financial aid forms and his childhood sweetheart walks out of the session before. Paul asks Gina about Tammy Kent, only to be told she can't talk about another patient (hey, didn't we just have this session with the kid Oliver? And who's watching the turtle?). Paul announces he's decided he doesn't want therapy, and in a theatre-of-the-absurd moment, Gina grabs her purse and announces she's going to the market, does Paul need anything? He begs her to stay, but if he doesn't want therapy, she wants to get her grocery shopping done. He offers to pay her for 'conversation' and in the same moment, mutters about how he hates that Walter pays him by the insight and he doesn't like people who think they can buy anything they want. This is the most interesting part of the session!

Ground rules: if Gina's going to treat Paul while she's treating his ex-high school sweetheart whom he might call, they have to promise not to have a relationship while they are both her patients. Wow! How does one control such things--- if they hadn't bumped into each other in the waiting room, Gina might never know they knew each other. I think I wrote a novel about this scenario once, where the psychiatrist didn't know he was hearing the same story from two patients falling in love: anyone want to publish it? Okay, so she won't let these two people date (who haven't seen each other in decades and just said Hi), but Gina doesn't find it a conflict to have been Paul's friend, colleague, supervisor, and have treated his ex-wife. Oh, and she's testifying in his malpractice case but she won't mention in her deposition what he's said in therapy today. Oy. And Oy.

Paul goes on to talk about his relationship with Tammy Kent, his father's abandonment of the family (for one of his patients) and his mother's suicide attempts. Gina is clear: he has to find those memories and sort out what happened to gain some clarity and deal with his monsters.

What do I think of the "you have to talk about it" mandate? I'm not much for insisting that people talk about things they don't want to talk about, but if someone's old demons keep intruding, I've found it useful to ask that they retell painful, powerful stories. I hadn't quite thought of it as gaining clarity--- but that's not a bad way to put it--- I think of it more as getting it out in the open, of taking away some of the power of the awful. Gina has done to Paul what Paul did to Walter: asked him to pull up painful old memories, moment by moment, and give them a little breathing room.

So Clink hates In Treatment-- --- these people aren't real. So far, two weeks into it, and it's been a really good season. I keep figuring ClinkShrink might come around for the turtle.
Posted by Dinah on Wednesday, April 15, 2009

Did you know that In treatment is Originaly an israeli Series ?

Here the psychologist is called Rubin.
:-)

Dinah - I didn't even catch the dressed-up Paul for Walter. Shame on me. See, it's important you keep up this blog for all of your psychological input - it's very important work. Walter is a piece of work - and there is more to come I'm sure.

I LOVED the sessions (?) whatever they are with Gina. I laughed out loud when she said "Okay then, I'm going to go grocery shopping ..." it reminded me of a mom talking to a young child and the dreaded natural consequence of one's own decisions. They can be painful when the person reacts unexpectedly.

When you wrote that the turtle was in a pie dish, the first thing I thought was that he had been cooked.

are they showing this season on iTunes like they did the first season??? I'm having a problem finding the episodes on YouTube (I found the first one... and then the second week... but there's the issue of the 4 episodes in between).

Then again, I'm getting ahead of myself - I need to rent the first season's worth of DVDs and get through those so I have some idea of what's going on.

A lot is definitly dramtized, but one of the patients so far could totally be me. A little more self possessed than I am, but even the crazier stuff said sounds like things I've thought, I just wouldn't share them. And some reactions are more extreme. Only thing that rally bothered me is things like with April she sounded like she was reading from a txtbook speaking about her dissocaiation. That, and some of the parallels in the story like with Walter are so neat and perfect they seem a contrived. Any shrink could be as as insightfull as Paul with all the low hanging fruit.