Eat, Pray, Love: One woman's quest to find herself 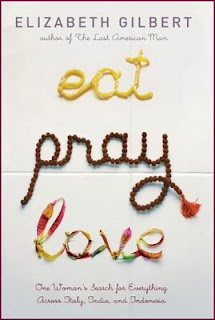 Elizabeth Gilbert is a novelist.  In her non-fiction real life, she had a bad spell: a contentious, ugly divorce, an overly needy relationship with a distant rebound lover, a bout of depression.  She goes on a journey to heal, to find herself-- a pre-planned, publisher-financed 4 months of pasta and language classes in Italy, 4 months of meditation at an ashram in India, 4 months with a medicine man in Bali.  It's kind of everyone's fantasy, no?  Okay, parts of it are kind of my fantasy.  Parts of it.
When I read a book, or listen to a lecture, or turn on the TV, grab my popcorn at a movie, I'm looking for something.  Sometimes, I simply want to be entertained (a worthy goal in and of itself).  Sometimes, I want to learn something that will change how I see the world, or how I relate in some small way.  Sometimes, I'm looking for something that resonates, that I can relate to, that holds true.  A great plot will draw me in-- so nothing about 24 or The Sopranos or LOST feels anything like my life, but still, they draw me in.
I started Eat, Pray, Love, and honestly, the author felt like a patient.  Her life is chaotic, her relationships packed with drama, she spends an awful lot of time sobbing on bathroom floors, and she makes no secret of her love-hate relationship with anti-depressants and what her therapist advises.  Her therapist and her Guru.  At first, I found it hard to relate to her, even though she was running away from her real life.  Does everyone else occasionally have this fantasy, even if real life isn't so bad?
I got to page 154, somewhere in India, and suddenly Elizabeth Gilbert became someone I could relate to.  Now people who don't know me very well sometimes think I'm laid back.  Anyone who does know me knows I'm a worrier, prone to obsessing about....anything and everything.    So Elizabeth Gilbert is talking about Sean, an Irish farmer she's met at the ashram and she's talking about Sean's "search for inner peace through Yoga."  He's home in Ireland, sitting with his serene dairy farmer father in front of the hearth, telling him about the wonders of his spiritual discoveries:
Da--this meditation stuff, it's crucial for teaching serenity.  It can really save your life.  It teaches you how to quiet your mind.
His father turned to him and said kindly, "I have a quiet mind already, son," then resumed his gaze on the fire.
Gilbert goes on to talk about people who don't have quiet minds, who are restless, and she includes herself in this group.
The other day in prayer I said to God, "Look-- I understand that an unexamined life is not worth living, but do you think I could someday have an unexamined lunch?"
In my last post on impulsive suicides, when I mentioned writing about this book, a few readers wrote in asking about the Amazon reviews-- one in particular calls her 'self-absorbed and irritating.'   Self-absorbed, self-indulgent, absolutely.  At some level, aren't most people self-absorbed?  I suppose it's a matter of degree-- since I listen to people's self-absorption all day, it doesn't particularly bother me, it's not a fatal flaw.  I wasn't irritated.  I suppose at some level, I just enjoyed the fantasy of it all.  The journey to self-discovery is, of course, and old and oft-told story.  Now please excuse me while I boil the pasta and recite my mantra for a while.
Posted by Dinah on Monday, July 07, 2008

If you can forgive the self-promotion, I think you might enjoy my new book, kind of the male version of Eat, Pray, Love, although I may seem to you like a patient you would have given up on years ago. I don't eat much in my story, or fall in love. I do pray, but in the end I utterly fail to get enlightened after 30 years of trying. You can read the prologue here to see if it grabs you:

Nice write-up, Dinah. Now I don't have to read the book (not that I would have anyway... kind of a chick book). Now, the monkey guy... that sounds like something I can relate to.

So it does sound like there is something redeeming about this book. The "self absorbed, indulgent..." part felt too much like a patient to want to spend my non-work time. However, I do indulge in the idea "running-away" from time to time, so I'll give it a try.
Thanks for the great review.

note to monkey guy--wouldn't you pray and then eat?

My daddy ( who was visiting us recently) taught me 12 pathways of Ken Keyes Jr recently.
The one that fits here is " I am continually calming the restless scanning of my rational mind in order to perceive the finer energies that enable me to unitively merge with everything around me."
This is pathway 10.I am supposed to memorize these pathways word to word and reprogram my brain( don't laugh, i am serious...it really worked for him.He is STILL married to mom...which is a great acheivement for any and also survived army life in style!!!)

Past 20 days or so we continually discussed these 12 pathways which we use as reinforcers and make goals according to his faviorite book...SHARPE, DR. ROBERT; LEWIS, DAVID, The Success Factor.New York, Warner Books, 1979. (ISBN: 0446811618).
I baught a copy as well!Its an antique book but i was lucky to find it ,thanks to amazon.

wE(me and dad) MADE THE SAME GOAL: TO BE ABLE TO ACHEIVE 100% HAPPINESS.

We both together read the book on daily basis.Collected data of what we do, analyzed them, added reinforcers to consolidate behaviour.

I had to make another crisis goal in last four days of their visit: to have better relations with mom and acheive 100% harmony with her.

Daddy would show me thumbs up everytime I was loving to mom.It was SOOOOOOOO nice.Best psychotherapy ever!!!!!!!!!!!

wellll, there IS a long tradition of praying and fasting...:)

Hi Dinah! I read the book and I am one of the Amazon reviewers who found Ms. Gilbert quite annoying. I found her quest for inner knowledge disingenuous. I question her approach. I thought the entire guru thing sounded like a cult. Anyways, I enjoyed your take on it! I think this blog is awesome!!!

Anon: and anyone else who thinks this blog is 'awesome' : Thank you.

So I've been thinking about the disingenuous issue. I didn't think her quest for self-awareness or inner peace was disingenuous. I thought Gilbert's willingness to share her quest, which often portrayed her as a bit shallow, was refreshing in that she was so willing to admit her weaknesses, her almost petty discussions with herself when she couldn't be deep and reflective in the way one might hope for. She shares superficial conversations with herself when she can't concentrate on a mantra, when she is unmoved by an important prayer that everyone else reveres. It's like she stands up and yells, "Hey Picasso, I don't get it, stick the eyes back on the face!". Or something like that. I liked her honesty, and I liked that she has a sense of humor about it, is willing to so publicly voice her insecurities, vulnerabilities, frailties and failings.

Okay, so this is what made it odd-- she ties up some of these issues too neatly. Months of soul searching about why she can't concentrate to meditate, people she asks, places she looks, and then one day gets the right answer, problem solved, life is perfect, and she moves on. She does this several times, and it doesn't ring true. It feels packaged and not believable. I chalked it up as a literary need to tie up lose ends--the point of the book is that she searches and finds, so she can't come back fat, full of pasta, unable to sit still long enough to meditate, hating the prayers and the gurus, and wanting only for one more pina colada in Bali. So, I see your point, but it didn't really bother me and I liked her journey. But does she have an iPhone?

Psych101: complete and total happiness. Off my radar. I'll settle for most of the day being pretty good.

Okay, I confess, I actually DO eat nearly every day...I just don't focus on it in my memoir...in fact, I just now finished a fairly healthy portion of vegetarian lasagna, salad, two glasses of sangria, and a brownie.

Forward the brownies and sangria and then we can talk.

I'll just take a few of the brownies . . . . . (or maybe some leprechauns or other wee folk, it gets boring around here and they'd liven up the place).

Okay, confession: I've never read Eat, Pray, Love, I just search for blogs where people don't like it so I can plug my book as an alternative. But I'm at the beach at the moment and doing my version of her book, which I'm calling Swim, Read, Sleep, and I'm finally reading her book, not so much because I want to but because I feel I have to. I slogged through her culinary binge in Italy and feel relieved that she finally made it to India and hopefully will chill out for awhile.

Elizabeth won me over in India. The eating and failed love story weren't grabbing me. Her experience at the ashram certainly did!

This is what I just posted on my blog:

"I thoroughly enjoyed Elizabeth Gilbert's account of her stay in India (The Pray part of Eat, Pray, Love.) And jealous, because when I do things like she did, like staying at an ashram and being in silence, meditating and chanting a lot, doing volunteer chores, I've NEVER gotten the blue-coiled kundalini snake to suddenly explode up my spine and out the top of my head into pure bliss consciousness. But I have experienced a quiet healing peacefulness in surroundings where people are devoting their lives to prayer, silence, sitting, chanting and serving. Elizabeth conjures the spirit of her Guru's ashram through her chatty willingness to include us inside her head, so we can sort of get an "ashram contact high," as she goes through her own transformation. Now onward to Love."

Eleizer you really need not be in India to do all that.

Do look at this website
http://www.chantandbehappy.com/home.htm
Its forever switched on in my home as long as my 2 year olds allow!
I particularly find kirtan 4 very soothing.( scroll down the page, it is the last on that can be downloaded)

Also we have a group in our area and we meet every saturday to chant and pray together and also have pot lunch.Its super fun.Check out in the area you stay, i am sure there must be some group of people doing it there too.

I found this book vapid, self-pitying and shallow. I don't understand how people see it as a spiritually enlightning or inspirational read.

I nearly put the book down in the Italy section, because I couldn't stand reading about yet another bowl of pasta.

I've been to India and went to university in Indonesia. I found the sections on these countries so shallow, that I could barely recognise them. What a shame Gilbert didn't go travelling in India. She might have learned more about herself if she had.

I recommend Perry Garfinkel's Buddha or Bust, or Peter Matthiesson's, The Snow Leopard so much more than Gilberts fast-food, sugar filled fluff.