Love Me, Love My Tats 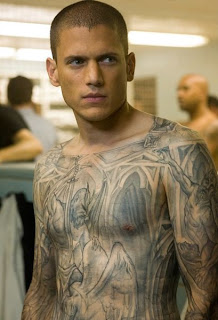 My first thought when I read this report was: "This was a forensic fellows' research project."

Psychiatrists in training to be forensic psychiatrists are encouraged to do some type of research project during their fellowship. Since the fellowship only lasts for a year, it can be difficult doing any kind of in-depth or groundbreaking studies. The tattoo project is not a ground-breaking study. The main reason it probably got published was because it was done on forensic inpatients (although Scientific American Mind confuses them with prisoners, they aren't). The research subjects were patients, not prisoners. They were committed to the hospital after being found legally insane (therefore, not a criminal at all) or incompetent to stand trial (mentally unfit to go to court, therefore their guilt is undetermined).

The most interesting aspect of this study was the one that was not addressed at all in the paper:

How did they determine that the patients, all of whom by definition were seriously mentally ill, were competent to give informed consent to a research project?

This question is at the cutting edge of forensic psychiatry these days, a field which is concerned with competency assessments and capacity for decision-making. There are particular ethical difficulties that arise when the research is being conducted on institutionalized subjects like patients and prisoners. I've already blogged about this in detail in my post Guinea Pigs Behind Bars. (Be sure to check out the link to the guinea pig costume web site. I still love it.)

You can download the entire study by clicking on the pdf link at the Wiley web site here.

Thanks for responding to my post and your views on the study. And yes, I did check out the guinea pig costume web site. It is quite bizarre. Why would anybody want to dress up their guinea pig as a pirate or cowboy?

I thought that was a ridiculous study. Of course, maybe because I'm tattooed. And not in a psych ward (not that it hasn't ever been a possibility)...but there are a lot different kinds of people who choose to get tattoos--- for example at my last job I met someone pretty high up in Microsoft who had 2 full sleeves. And that's more common in a lot of professions these days. So yeah, maybe having tattoos is an indication you don't give a f--- what other people think (to a degree), but to slap the "antisocial" label on someone because they're tattooed--that seems like bad research. Too many confounding variables. What about all the professional athletes that are heavily tattooed?

Antisocial or not that guy in the photo is a hunk (though still a kid to me).

did you hear about the recent guinea pig festival? if not, google it. good times!

But it seems very judging kind of attitude that if someone has tattoos they might be antisocial.
Incidentally at March of Dimes, there is a very active volunteer whose husband has a tattoo shop.
Here is her blog http://www.shareyourstory.org/webx/.eee7f26/

They are organizing "tattooing to save babies day" on august 2nd and they and their many colleagues will be donating all they earn that day to MOD.

They have had over 5000 hits on the site below.They have a map on the site and people(I AM SURE NOT ANTISOCIALS) from all over the world have visited the website.

Doctors open your hearts and donate for the great cause!!

My husband, who has been diagnosed with Bipolar, always had two very meaningful tattoes, one on each arm, near the shoulder. When his bipolar was misdiagnosed as depression, he went into a manic phase and got several not-meaningful tattoes on his forearms, which, when he was not manic, he had said he would never do, because they are difficult to hide and always look bad.

It was surprising to us when he finally was diagnosed with bipolar, that the nurse-practitioner and the psychiatrist that diagnosed him both commented on the forearm tattoos, and that people with a bipolar diagnosis often get tattoos on the forearm.

I thought it was interesting, but a little hard to swallow, and, unfortunately, we didn't question that information. But it kind of goes along with your post, and I'm interested in finding out if there is any factual basis in it.

There are so many cultural, historical and social reasons people get tatts that it seems about as meaningful as trying to link race or left-handedness to mental pathology.... nobody's ever thought about that before....

Hi Clinkshrink,
I also am concerned about the ethics of studying people who may not be able to provide informed consent. I find it disturbing. I am glad you brought that up.
...aqua

Sorry for commenting twice but the blog topic is so interesting...

I agree with Anonymous about cultural thing.
I beleive even mehandi( henna) designs are called tattoos by some. I hope you know...they are not done by needles..those go away.

We in India and i beleive in many other countries get it done during marriage ceremony.
Even i had it done for my marriage on hands and feet.They went away after few days.

If you see this link.. at the end of the blog there is a video by group called 'models' and they are singing about 'mehandi ki raat' = 'night of mehandi ie night of marriage'
Its a really sweet song, they show the girls putting mehandi on the bride!

As far as I know, all patients (even those involuntarily committed to treatment) are considered competent to refuse medication unless proved otherwise, so wouldn't the same apply to research, especially a non-invasive study like this which involved no medications?

Its so cool that you posted about tattoos. I recently did Grand Rounds on the same topic.

Thinking of guinea pigs behind bars... I ate guinea pig (cuy) in Ecuador....

This can't be generalizable to the general population. Nor, I would think, to even the general prison population. So it's useful to the forensic psychiatric population, right? But aren't the people working there going trained enough to looking for ASPD in the first place without looking harder at the tattooed patients?

So what's the value? More freaking pigeonholing, I guess.