Meeting Under The Table 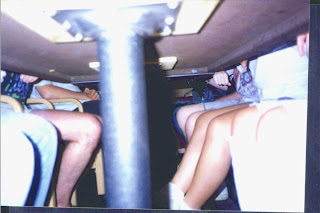 ClinkShrink is working on a post while I type, so if mine goes on top, please check out hers, too. It's something to do with the 4H Club, she must be making jam again.

So everyday now, I sit with patients and think "I wish I could blog about this." This confidentiality thing, from a blogging shrink's point of view: it's so unfair. Okay, if you told me a great story today, it's not going up on Shrink Rap. My friends and colleagues, however, don't have Hippocrates-protected confidentiality, so I'll blog about them instead.

Have you been to a big meeting lately, say 10 or 12 people around a conference table? I've been to a bunch, and ya gotta love technology. There's someone who chairs any given meeting, and being the overly compulsive crew that psychiatrists are, there's a meeting before the meeting to set the agenda, and the meet at the meeting with the typed-and-distributed hard copy script. But then, under the table, there's the rest of the meetings with their own agendas going on by way of blackberry and cell phone text messages. So perhaps the topic on is The Kelly Case and Forced Medication legislation, or changes to the state's medication formulary, or yet another form that needs to be signed or... you name the topic. My cell phone pings. Roy texts from across the room: "wimp." My cell phone pings again: commentary on what someone said (.... and, please, if you're getting text messages about all the things I say, I don't want to hear it). Camel is concerned that what she said might be taken out of context. Only no one noticed what she said because everyone present is dealing with their own Under The Table agendas, including the person chairing the meeting who's getting pinged about how he's spending too much or too little time on any given topic. I get bored and text my kid at home to ask about the latest with American Idol, or Gossip Girl or whatever the show of the moment is. Other kid pings to ask what's for dinner. ClinkShrink pings with a photo of a pigeon or a mushroom or something she sees on a walk.

Just don't ask what really happened, I have no clue.
Posted by Dinah on Thursday, January 24, 2008

Just to clarify: none of the legs in that picture belong to us. Or at least me.

You know, I am amazed at all of the texting, etc. going on nowadays. I feel like a total luddite. I'm not a texter. When I'm in a meeting, I just want to be there. My goal is to decrease the amount of multitasking in my life, actually. I have a hard enough time paying attention to one thing at a time. There's no way I could pay attention to the texting and the meeting at the same time. In fact, it almost drives me to distraction when my pager keeps going off when I'm operating. Fortunately a very rare occurance now that I'm not a resident anymore. :) To each their own, obviously. My friends tease me about me having the attention span of a kitten on meth, so maybe if my attention span were better, I'd be a better multitasker. I do love it when one very engrossing task (operating, or perhaps Guitar Hero III) makes the rest of the world disappear for an hour or so.

P.S. I hope if I ever decide to do a second residency (even if it is psych), someone will recognize the threat to myself and others that that represents and force me to get some sort of psychiatric treatment to restore my sanity!

I have carpal finger syndrome.

I detest when people play on their phones during meetings (or whatever). Effing wastes my time (and everyone else's) because they aren't working towards solving whatever problem or figuring out something. It's like they think they're too important to treat someone else with even minimal respect. It's back to grammar school note passing. (Little cranky there, eh? Happily, it almost never happens that I see. I either run with a more respectful bunch of people, or a less technologically adept. Your pick.)