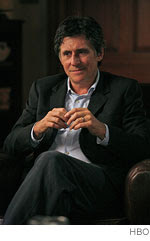 I got an e-mail from my husband today-- he sent along a review by Dorothy Rabinowitz of a soon-to-air HBO series called "In Treatment" and suggested I "sub-blog" as the show plays.

It is odd that the network that has tried long, hard and haplessly to come up with anything remotely equal to the power and creativity of its blood-drenched "Sopranos" saga has finally succeeded in a series entirely shrouded in the quiet of a therapist's office, where the only threats come from words, revelations, the assaultive force of unwelcome truths. They are an arsenal of terrible power as deployed in the battles waged hour after hour in the intimacy of the consulting room -- the arsenal that drives so much of this series that is, in its invention and artistry (if not in its nonlavish production values), a worthy successor to "The Sopranos."

A show about psychotherapy that ranks with The Sopranos? I'm on it. Five nights a week, starting Monday, from 9:30 to 10. Five nights a week? I'll do my best, that's a lot of therapy to watch for someone coming home from the office.... it better be good. The psychotherapist is played by Gabriel Byrne (pictured above) and his therapist (of course) is played by Dianne Wiest. If I don't get to it in real time, there's always TiVo. ClinkShrink tells me she can't watch it, no Cable. Roy may be under the floorboards again, and I'm not sure what kind of reception he gets there.
Posted by Dinah on Friday, January 25, 2008

Email ThisBlogThis!Share to TwitterShare to FacebookShare to Pinterest
Labels: TV

TiVo (or depending on your cable company "OnDemand") is definitely the way to go. Too bad the psychotherapist wasn't played by David Byrne -- a real Talking Head ;)

Dinah, I know it was the NYT writer and not you that made this omission. If she's looking for The Sopranos Redux, she need only tune in to HBO on Sunday at 9PM for "The Wire". It may not get the same ratings but it definitely gets the critical acclaim -- I never miss it.

I am curious if any psychiatrist does formal psychotherapy, if younger than 70.

If a guy can get cell phone reception in a New York subway whilst a monster is battling it out overhead, then surely Roy can get SOMETHING!

Oh, don't go see a monster movie, early in the day, and then later that night, come home, and SCREAM because you think a full white garbage bag is coming to life and launching part of itself at you.

Turned out to be a very white cat, probably looking for warmth or eats (WHY our neighbors have had this in front of their door area for a week or two I don't know.)

I would have screamed regardless of whether I had seen a movie today, but the parallels are kinda funny, in retrospect. I'm surprised you guys didn't hear my double scream. Two scoops, for the price of one. There's white snow all over, white bag, white cat, it was just all alot of white, in the dark.

As my dd would say, it scared some of the heck right out of me!

*stomps on floorboards* Roy, you down there? (hrm, in another funny parallel, would that make me the monster, and he the hapless New Yorker in the subway waiting it out?)

Anyway, I liked the movie. My husband was nauseous the whole way through (he gets motion sick at the drop of a hat, but wanted to try anyway. We forgot to bring Mythbuster recommended ginger pills for motion sickness . . .).

I have been without a cable or even TV since last July, and have not looked back. If I have it, it draws me in and sucks away my free time, and I am mostly powerless to resist.

So I have been TV sober for 6 months. If there is something I do want to watch, and it is not on DVD, then I find it on the channel website (ABC,com, etc), YouTube, or other odd places. So far, this has worked for me.

I've never been to hbo.com, but I'll have to go check out the series (the last soap opera I got addicted to (well, besides Lost or 24) was Edge of Night. I don't want that to happen again.

To answer Supremacy Claus - My psychiatrist does psychotherapy, and he is in his 30s, I think. Very good at it, too. Though I'm not sure how many other clients he does formal psychotherapy with besides me, as he also works as an attending physician at a hospital, but since I've been with him since his residency, we still work together doing psychotherapy twice a week. He would actually like to meet more often than that, but finances and time constraints prevent it from my end.

Dinah - I think the show looks interesting, and I'll probably watch it at least some of the time! Will be interested to read your thoughts on it!

Roy, I was like you for nearly 2 years. Had no TV in my apartment - relied on my computer DVD player, which suited me just fine. Now that I have a TV, I'm addicted to Celebrity Apprentice. I think I'd rather be addicted to pain killers, alcohol or something more substantive.

Oh, and BTW, I hate that I live in Canada - we don't get these types of series unless a) you have a subscription to HBO through digital cable, or b) you hold out long enough for the DVD.

Carrie, I don't read your blog (i don't have access), but your psychiatrist wants to meet with you more than twice a week? Wow. If anything, mine wants me to try and figure stuff out for myself, and then report back into him when I next see him. Of course, if I get into trouble, I call him "CALL ME BACK! I don't know what to do!" and then of course, I trudge back to his office.

Email me at LizzPiano (at) gmail (dot) com, and I'll give you the link to my anonymous blog that I actually write on from time to time now. I no longer write on the one that is private. I just don't want to post the link to my anon blog here since I'm not ready to link it to my name.

At any rate - he is more traditional with the psychotherapy - I think he would have me come every day if I could do it. This is not because he feels I need serious help or anything like that, but he seems to think that the more frequently we work together, it takes some of the day-to-day life stuff out of the equation since we meet more often, and allows us to focus on some of the more serious stuff. I'm not explaining this well right now - he even has me sit facing away from him to take my interpretation of his nonverbal cues out of the equation as well - which is supposed to be reminiscient (sp?) of the couch in psychoanalysis. I was a bit resistant to that idea at first, but now it doesn't seem as weird as it did at first. There are still some times where I would rather face him than stare at a blank wall or at my own hands, but this is what he feels would be most helpful, and I understand his motivation for doing it. Most of the time, I think it does make things easier, since I really don't like to hold consistent eye contact when speaking one-on-one with somebody, so by facing away, I don't have to worry about that and it feels less intense. There's more I could say, but I feel like I'm having trouble depicting this very well right now!

Anyway - email me if you want to know the link to my current blog.

Hey, is this the English version of the Israeli original - beTipul? Then I have seen it already. With Assi Dayan as the therapist. And Gila Almagor as his - woah!

Man called Anne, this is from HaAretz:

"The American cable network HBO has decided to order 40 new episodes of the series "Treatment," based on the critically-acclaimed Israeli television series "Betipul."(January, 2007)

Btw, is the show in Israel shown with English subtitles, or just the standard Hebrew Closed Captioning (which I don't understand anyways)

No, they actually remade it in English - the Israeli show. The Israeli one is actually quite good, and fairly realistic. At first it sounded like possibly the worst idea for a TV show EVER. But I'm really interested to see if the American version will end up "juicing it up" somehow...

Oh, now I reread the question. Here, it's just with the closed captions. The second season just started last week. I missed a few. Hoping it will run again soon. It's being shown every night, so it's hard to tell.

BTW, maybe you can forward this question to Mark Komrad (who guest casted with you on one of your podcasts a few months back), but I'm wondering what his take is on the realism of the series (if and when he watches it)...

Also, the NYT ran an article on this too (I'm finding this topic very interesting!)

What about that new one with Dr. Drew (Pinsky) and 8 celebs checking in to rehab with him as their doc? There's three episodes on Amazon Unbox so far, it looks like in #2 one of the so-called celebs gets sent off to the hospital for Detox problems or whatever.

Sorry, I didn't pay attention to the captions. They probably are in Hebrew. Or they might be in Russian...