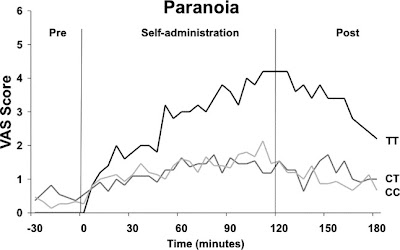 So I thought I'd make another post about how more is being learned about our genetic makeup and how that may relate to medication side effects. In this instance, the "medication" is cocaine, which causes a huge release of dopamine. Some folks get really paranoid after using cocaine. This study asked the question "Is reduced breakdown of dopamine associated with paranoia symptoms in cocaine users?" 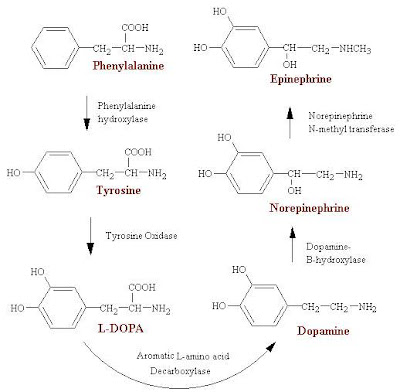 First some background. The above graphic shows that the neurotransmitter dopamine (or DA) is converted into norepinephrine (or NE, sometimes also called noradrenaline, or NA) by the enzyme dopamine beta-hydroxylase (DBH). You can see that all this enzyme does is add the little -OH (or hydroxy) part to the dopamine molecule to make norepinephrine.

Kalayasiri 2007 showed that a particular mutation (C1021T) in the dopamine beta-hydroxylase (DBH) gene was associated with significantly increased paranoia in a small group of cocaine abusers (see top graph). Cocaine users were blindly provided with different doses of cocaine (bet it was easy to find subjects) and their level of paranoia was rated every few minutes using a Visual Analog Scale (VAS). Users with the TT variant of the gene rated their paranoia level consistently higher than those with the CC or CT gene variant. It has elsewhere been shown that the TT form of the DBH gene is broken, and so is much weaker at converting DA to NE. The resulting higher levels of dopamine in the TT people may be why they get more paranoia.

[Genetics 101 Note: when you see this type of notation, "C1021T", all it means is that at position 1021 along the double-stranded DNA for that particular gene, there is either a C or a T nucleotide at this single point on either DNA strand... if each of your two DNA strands (one from Mom, one from Dad) contain one or the other, then you are homozygous for either one (CC or TT)... if Mom gave you a C and Dad gave you a T, then you are a CT (called heterozygous). Thus there are 3 genetic variants (in this case, CC, CT, or TT) which can exist at this single nucleotide position. These single nucleotide variants, or "polymorphisms", are referred to as SNPs, or Single Nucleotide Polymorphisms. Different SNPs can result in that particular gene's product or function to be enhanced or diminished, resulting in functional variations which may contribute to individual variations in one's response to disease, drugs, or the environment.]

Because this paranoia and related symptoms are uncomfortable to most people, it may serve as a deterrent to using cocaine. In fact, folks with the TT genotype might be at reduced risk of becoming addicted to cocaine because their DBH gene does not work as well. In fact, the alcohol deterrent drug, disulfiram (Antabuse), also happens to block the DBH enzyme (remember, the DBH gene contains the instructions to make the DBH enzyme). This would result in someone with a normally functioning enzyme (from a CC or a CT SNP) to have an enzyme that works like someone with a TT SNP. Antabuse has been shown to be helpful in treating cocaine addiction.

As further evidence of this connection, Schank 2006 used DBH knockout mice to demonstrate hypersensitivity to cocaine in these animals, suggesting that low DBH activity in some cocaine abusers may increase the drug-related dysphoria and aversion, making them less likely to become addicted to the drug.

We hypothesize that the ratio of dopamine (DA) to norepinephrine within noradrenergic vesicles is elevated in TT [homozygous] subjects, so that during cocaine intoxication, DA-mediated neurotransmission is relatively elevated in regions richly innervated by noradrenergic and dopaminergic fibers (e.g., prefrontal cortex). Alternatively, given observations of up-regulated high affinity DA receptor binding sites in DBH knockout mice, TT homozygotes may be hypersensitive to DA, and thereby [may] be more vulnerable to cocaine-induced paranoia.

Will the DBH Knockout mice be my friends on Facebook?

Dinah: of course they will. And bonus! everyone else will be jealous. For, as their name implies, they're hot.

Trust a gerbil to compliment a rodent. Maybe they're just bad boxers.

Yeah, well, those mice might be knockouts, but boxers sure are dogs.

(Trust a ClinkShrink to keep the door open for a punning gerbil.)