The Best of Intentions

First, the rest of Chapter 10 is up on Double Billing. 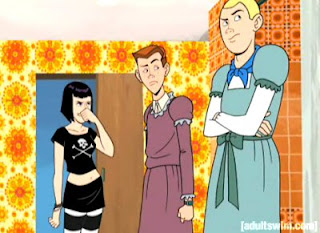 Really, in some ways, everyone is a little bit of a psychologist. People naturally look at their worlds and tell stories to explain what they see. Some people are more inclined to do so; they search for patterns, they find bits of evidence, they write the tale to make the pieces fit.

"Harvey is an introvert because he was bullied as a child."

Okay, so we're all out own psychologist, we all see cause and effect in others and ourselves. What strikes me most is that some people have a tendency to write their stories in terms of the untestable assumptions about the intentions of other people.

"He ignores me because he wants to make me angry." Or because he's jealous, or manipulative, or because people ignore me because they don't like me because I'm the wrong size, shape, color, religion.

How do you know? I often ask for evidence, and it pours in. Once someone has formed an idea about the intentions of others, the evidence supports the theory. A story is told that builds the hypothesis of meaness in the other person. I listen. Sometimes I say nothing (what's there to say?), other times I point out alternative reasons why someone could have done something so mean aside from their innate evilness. Bad hair day? Person was so wrapped up in their own stuff they didn't consider how it might impact someone else? Pure misinterpretation? Or simple inconsideration? When evil intentions are ascribed to total strangers who have no clear motive, I am particularly suspect of the stated intention. Maybe the guy in the car in front slammed on his brakes because his cell phone rang, or he realized he missed his exit, or there was something in the road, or he dropped the directions, and not because he wanted to make you swerve.

Am I right? Who knows. There are people out there who are purposely vengeful, and sometimes I can be a bit naive, unsuspecting, overly trusting. I want to believe that even if people are flawed, they are basically good, that their intentions were generally something other than to willfully cause pain. Funny thinking for someone who watches The Sopranos, Lost, and 24-- where evil is so central.

I think it helps people if they can clarify the intentions of others -- maybe even ask: Why did you do that hurtful thing?-- rather than create explanatory stories that may propagate painful myths. I'm fond of saying, "If he were sitting next to you, how would he tell the story?"

It's been a long day.
Oh, and I did the Double Billing link in green because Roy doesn't like the links in Red. It's because he has too many dopamine receptors in several areas of his brain.
Posted by Dinah on Tuesday, June 26, 2007

Even so, by asking, "If he were next to you, how would he tell the story?" one runs the risk of hearing, "Well, he'd say [insert innocent explanation here]... but he'd be lying in order to get you on his side."

Though I suppose in that case one might find robust delusions rather than mere misinterpretations...

Three of my most important revelations ever have been:

a) It's not always about me.
b) People can't read my mind.
c) I can't read anyone else's mind.

Who knew that sometimes people act weird for reasons other than hating me?!

Is she stifling a laugh? Holding her nose in disgust at the unfashionable plum and cerise dresses? As for the guys, their behaviour is obviously coerced, what are the power relationships? Is this meant to be some form of punishment?

Apart from the fact that I'd kill to have a body like hers, my considered opinion is... that it's just a cartoon from AdultSwim. Sometimes a cigar is just a cigar, and what you see is all there is.

Are you calling him a big dope? hee hee.

Perception, what we perceive . . . quite often we don't even realize that this filter of our perception is skewing our interpretation of the situation. Sometimes it's a little jolting, startling, surprising, or even like a punch in the gut, depending on the perceptions involved and the depth of emotion and seriousness of the situation, when I get a glimpse, flash, what-have-you, of the situation sans the personal filter/perception. Oftentimes, I wish I could grasp that quick glimpse of it again; sometimes, it is such a profound thing, or touching a central issue, that I'm like, "Whoah!", and I have to kind of mentally chew on it for awhile, sometimes on the back burner, and let it simmer, percolate, and think on various aspects as they pop to the forefront every now and then.

Then, sometimes . . . . the punch in the gut ones, well . . . those are quite difficult. For example, I perceived my in-laws as accepting me, liking (with an exception here and there), and loving me as a part of the family. Then, to find out a year ago that my husband's siblings had actually, for most of the then ten years of my marriage, decided that I was not acceptable, and not family to them; that I was bad for my husband and daughter . . . .and that they had only deemed me fit to be in the family, or understandable as my husband's ineffectual, annoying, depressive, impulsive, lazy, unproductive wife when I had the doctor's diagnosis of bipolar.

That one was and is more than a punch in the gut; it felt like my world had been pulled out from under me. Anyway, I dealt with some of it last year in therapy, but when an issue lingers in my heart and mind again, pops up again for reasons I don't yet understand but I'll acknowledge that there must be more aspects of this to work through, or more processing of the pain to do, and get on with it shall I ever have access to therapy again. Until then, I'll fumble through in my own way.

Ack, long post. Sorry. I do think my exposition on different aspects of perception, and my example, are pertinent, actually.

I much prefer the times when I somehow am able to see around my usual perceptions, filters, etc. and find that I am pleasantly surprised by how things actually are, instead of how I perceived them to be. The times also, when I am pleasantly surprised by people's actual intentions, instead of what I had assumed, negatively, was the case. Those, are the nice surprises.

Gerbil:
When pressed, I find that people usually do have the sense that the other person (spouse/child/parent/boss) would have a totally different perception besides malicious intent. Sometimes folks simply say "I don't know." No one has ever said the other person would out and out lie to get me on their side, but if they did, so be it. Much of what I hear leaves me speechless, this would be no different.

Yay: Exactly. That could have been my whole post (well, not really but close).

Zoe Brain: You don't really want to be a cartoon character. Or maybe you do and I'm just making assumptions....

Sarebear: What can I say.

Who goosed Roy's dopamine?
When it comes right down to it, you shouldn't trust anyone.
That has been proven time and again.

It sucks that not all of us are worth enough to other people for them to actually like us and have good intentions toward us. When that's the case, it's especially important to not cognitive-behavioral-therapy-away the information that your environment is trying to give you so that you don't keep digging yourself deeper into a hole by acting like other people like you when you're constantly pissing them off.

Again, it sucks. But not everyone is equally liked by the people around them and not everyone has the skills and abilities to become the kind of person other people will like. In that case, sometimes the best thing you can hope for is to be aware enough of other peoples' intentions and perceptions of you that you can keep from making them angry, and be allowed to stay on the fringes without being dropped entirely as a friend.

That I was giving some example(s) of how this sometimes turns out, and it's not always pessimistic filters, sometimes it's optimistic . . .

That things go both ways, that people can be incredibly lousy, but assuming that all the time is a misperception too, and that it can be hard to know when maybe your instincts are picking up on something vs. your perceptions are reading too much into things/people without basis, etc.

That sometimes life really does leave a person without a support system, and it's not always misperception.

Does that do it for you?

I believe, but can't prove, that there's a degree of self-fulfilling prophesy here. If you carry the mindset that the intentions of others are bad, you react as such. If you believe they are good, you distort things such that you view them positively, you give off vibes as such.

When a stranger's pointing a gun to your head and making demands, maybe a good time to assume evil intentions.

I saw a 60-something year old nun in a habit being searched and wanded in the airport the other day, I wished I could take a photo... (probably this belongs under the i-phone post!)

Well, yes. I agree with that, Dinah. I was just pointing out that either way, optimistic or pessimistic assumptions of other people's intent, can turn out to be mistaken.

A positive attitude IS a good thing, and I believe there IS a self-fulfilling aspect to one's attitude, but of course, and I think you'd agree, the self-fulfilling aspect is only a part of the equation. No matter how positively one thinks, other people will negatively surprise us with things that go against how we had thought of them/our relationship with them.

One has to balance an upbeat attitude, with being aware of one's own intuition or ability to pick up on clues that something might be out of whack in a relationship or situation, with accepting reality and that you can't always control how things turn out, although you can do your best.