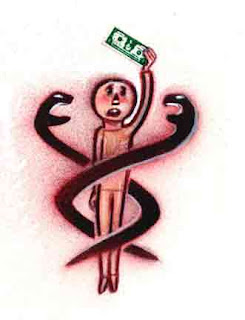 The “Chapter that Wasn’t Written” in Shrink Rap should have been on the changes in psychiatry due to insurers. Recent posts have underlined the effect of pharmaceutical companies and the ways in which they have distorted data and biased the attempts to have an evidence-based practice. While these comments have a lot of validity, I think the  influence of Big Pharma on the field has been exaggerated. There is another culprit which has had a more pernicious and less easy to combat effect on psychiatry.
When insurance companies started to severely limit psychotherapy and reduced reimbursements drastically, the entire field of psychiatry changed. They made practicing purely a med management model much more profitable than talking to patients. Worse, they created an atmosphere in which a doctor who saw his patients frequently was considered to be doing something unnecessary. Just a short time ago there was no need in Maryland to explain to one of the “reviewers of medical necessity” even twice-a-week psychotherapy. Such treatment rapidly became impossible to get approved.
The training programs changed to reflect the economic reality. Psychiatric residents once had extensive training in psychotherapy. Many residents were in psychoanalysis. No more. Becoming expert on how the mind, as opposed to the brain, works has been abandoned to psychologists and social workers. As always, Philosophy Follows Funding.
Posted by Dinah on Saturday, July 09, 2011

The reimbursement shift didn't happen in a vacuum. The release of DSM-III and the rise of "biological psychiatry" had a lot to do with it.

Rob read the DSM article in the paper yesterday?

Didn't see it. I'd be grateful for the cite, though.

Wv - plino.
Pliny the Younger, to his friends

No, the reimbursement shift didn't happen in a vacuum. It happened for many reasons (and not primarily DSM-III, IMHO). It happened in a society that worships efficiency.

Those who control the money think that if the psychotherapy could be done by someone cheaper, then let's let them do it. The psychiatrists can do the part that requires a medical degree -- they can give drugs.

In an effort to get the cheapest care, I think we have sacrificed the best care. (And in the long run, we have neither the best nor the cheapest).

The Alienist - "Those who control the money think that if the psychotherapy could be done by someone cheaper, then let's let them do it."

But, what's wrong with that? It wasn't with the psychiatrist who also did psychotherapy where I improved. In fact, I got a lot worse. It was with the cheaper LMFT. There's so much variability between those who do therapy, and the degree has little to do with whether or not the person knows how to effectively communicate.

I was not arguing that non-psychiatrists should not do the psychotherapy. I was saying that in an effort to save money, those who control it decide FOR THE PATIENTS (not WITH the patients) where they can get their treatment.

Anyway, I'm glad you found what worked for you.