Cocaine: Running all Around Their Brains

First, a quick shout out to Dr. Doug Perednia over on Road to Hellth (paved with mixed intentions) who wrote a glowing review of our Shrink Rap book! 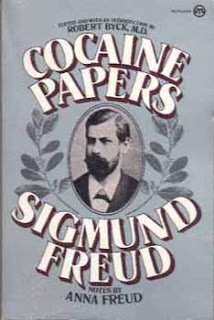 We think of addictions as conditions that destroy lives.  With some addictions-- like crack, or cocaine, or heroin-- it seems inevitable.  In the New York Times, there are two recent articles about addiction that are worth looking at.  Sherwin Nuland has a book review of

AN ANATOMY OF ADDICTION

That song of praise was “Über Coca,” a monograph published in July 1884 in a highly regarded journal. In his perceptive new book, “An Anatomy of Addiction,” Howard Markel points out that this landmark essay — Freud’s first major scientific publication — was in fact a turning point for the young scientist. “The most striking feature of ‘Über Coca’ is how Sigmund incorporates his own feelings, sensations and experiences into his scientific observations,” Markel writes. “When comparing this study with his previous works, a reader cannot help but be struck by the vast transition he makes from recording reproducible, quantitatively measurable, controlled laboratory observations to exploring thoughts and feelings.

Nuland goes on to say:


“Most recovering addicts,” he writes, “insist that two touchstones of a successful recovery are daily routines and rigorous accountability.” Around 1896, Freud began to follow a constant pattern of awakening before 7 each morning and filling every moment until the very late evening hours with the demands of his ever enlarging practice (he was soon seeing 12 or more patients per day), writing, lecturing, meeting with colleagues and ruminating over the theories he enunciated in such articulate literary style. Markel concludes: “It appears unlikely that Sigmund used cocaine after 1896, during the years when he mapped out and composed his best-known and most influential works, significantly enriched and revised the techniques of psychoanalysis and . . . attempted to ‘explain some of the great riddles of human existence.’ ”

We're a psychiatry blog, so I'll let you read the book review (or the book) yourself if you want to read about the Dr. Halstead, the famous surgeon, and his cocaine use.
In a separate opinion piece, "Addictive Personality?  You May be a Leader"  neuroscientist David Linden talks about how similarities between addictive personalities and leadership characteristics:

The risk-taking, novelty-seeking and obsessive personality traits often found in addicts can be harnessed to make them very effective in the workplace. For many leaders, it’s not the case that they succeed in spite of their addiction; rather, the same brain wiring and chemistry that make them addicts also confer on them behavioral traits that serve them well.

So, when searching for your organization’s next leader, look for someone with an attenuated dopamine function: someone who is never satisfied with the status quo, someone who wants the feeling of success more than others — but likes it less.

I'll leave the rest to you.

Email ThisBlogThis!Share to TwitterShare to FacebookShare to Pinterest
Labels: addiction

Agree about leaders and addictive traits. Not so sure it is a positive that we value that kind of leadership in our society. This is how we manage to end up with corrupt and greedy businesses and governments, not to mention the toll taken on the families of the leaders. These leaders leave lots of casualties in their wake, including themselves.
LSD

What you said about leadership and addictive traits is fascinating. I can see the parallels in my own career even.

I wonder if there's a way to learn to enjoy the feeling of success.