What I Learned Part 4 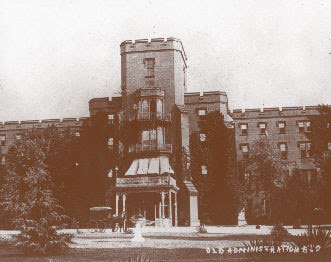 I attended a great lecture on the history of forensic psychiatry.
Prior to 1825 most forensic experts were providing testimony on
relatives or former patients. There was a woman who tried to kill King
George III and was found insane. Benjamin Rush promoted the use of the
"tranquilizing chair".

Homeland Security is moving into the old St. Elizabeth's Hospital.
There's something weirdly appropriate about them being in a
psychiatric facility. James Hadfield killed another patient and later
escaped but was recaptured. Edward Oxford tried to kill Queen Victoria
and was found insane. He was ultimately discharged from the hospital
and immigrated to Australia.

It's estimated that there are150 victims of Munchausen's by proxy
every year. Most victims are under the age of five.

A surprising number of surgeons have performed their own procedures
including appendectomies and herniorhaphies.

Posted by ClinkShrink on Sunday, November 01, 2009

How did I become responsible for your pictures..You can't find someone doing their own appendectomy???

Ow, wouldn't that hurt to do your own appendectomy?

remember the news story about the guy who cut off his arm with a pen knife after a rock fell on it and pinned him out in the wilderness? i think he went on the lecture circuit after that talking about stress managment to corporations and made a mint.

I didn't realize St Elizabeth's had closed. Back in the late 1960s, one of my high school teachers, Sister Frances Ann, drove me and a couple other girls there every couple of weeks to sing and play guitar for the patients there. The girl with the guitar was somewhat obsessed with Peter, Paul and Mary, so we sang a lot of their songs. In retrospect, I'm struck by the poignancy of singing "I'm leaving on a jet plane; don't know when I'll be home again," to a group of elderly people who looked like they'd been there for decades and who may well have spent the rest of their lives there. Some of the patients were vaguely appreciative and requested us to sing songs we didn't know and had never heard of. Some tried to sing along. An occasional patient wanted the overhead TV turned back on. Most of the patients seemed glassy-eyed and stared off into space, oblivious to whether we were singing or whether the TV was on--it apparently made no difference.

anonymous - i remember that story. i also know what it's like to be faced with an emergency and stay calm.

however, i personally believe that the ability to stay level-headed in an emergency does NOT translate to staying destressed in daily situations.

i.e. in my own experience, i have:

-been robbed at gunpoint

-watched my husband get assaulted on my front lawn and had to stop the guy from potentially killing him, while my baby slept upstairs in the house

-gave birth at home via a midwife over the course of nearly 2 days without any drugs (i did not dilate properly and had to have a cervical lip lifted over my baby's head, and i also broke my tailbone)

... but my ability to stay level in a storm is completely useless when i am at work and have a deadline looming, or if i am faced with the mean notions of an overly critical relative...

looks up the word appendectomy... i might need one

Yeah, that rock/arm guy thing happened out here in Utah, and there was alot of news about it locally after the national attention died down.

The slot canyons here are gorgeous, but can be dangerous, although it's usually because of flash flooding.

Me, I'm not good under pressure, not good at ALL.

Although I do remember once a car accident in front of my parents' house when I was a teen, 16-17 ish, and I was about the first one out of the house but my Dad was next and he ran over and yelled for me to get a blanket which I did, and everything I saw but didn't register until I was done bringing things asked or yelled for to the scene, last thing being an umbrella to help keep the sun out of the victim's eyes (was vehicle vs. bicicler accident) and the sun is very intense at these altitudes anyway.

Then, I retreated to the driveway and it was about then that our Bishop, the head of our congregation, pulled over in a cul de sac around the corner and jogged over, and asked what happened, and someone said, but I started to feel very faint because I could see the blood that had started to fill up one side of the victim's face and just everything else about it, the sounds of the victim's pain and the unnatural positions of limbs and things . . . my Bishop then saw matters were in hand with the accident, the ambulance arrived then, but he saw I was falling over about to faint so he made me sit down and lean forward and stuff and just breathe, and had someone get me some cold water, cause I was in a bit of shock and not thinking.

BUT, while things were needed, I handled myself and got what was needed until I wasn't needed and then is when I let it in so maybe I did ok.

Not sure what this has to do with the post, and I know I sure as heck couldn't do my own anything like sawing my arm off, although when it's life or death who knows what one can do; I'd have never have thought I could have helped that accident victim the way I did either.

Oh, and then there's the time I folded my foot in half, with some force, but that doesn't really count as stress because I was in too much shock to be in a right state of mind to be able to handle the situation anyway, lol. I just gasped and then kept thinking, how do I get off it with it folded like that? Well duh, you lift up your knee, but my brain wasn't functioning right, so that didn't occur to me.

And I've never seen/heard my overweight mother move so fast in my entire life. She hauled me up the stairs by my armpits by sheer adrenaline.