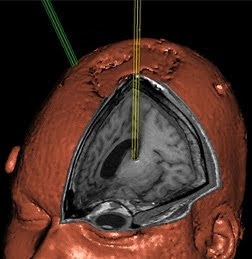 In one procedure, called a cingulotomy, doctors drill into the skull and thread wires into an area called the anterior cingulate. There they pinpoint and destroy pinches of tissue that lie along a circuit in each hemisphere that connects deeper, emotional centers of the brain to areas of the frontal cortex, where conscious planning is centered.

This circuit appears to be hyperactive in people with severe O.C.D., and imaging studies suggest that the surgery quiets that activity. In another operation, called a capsulotomy, surgeons go deeper, into an area called the internal capsule, and burn out spots in a circuit also thought to be overactive.

An altogether different approach is called deep brain stimulation, or D.B.S., in which surgeons sink wires into the brain but leave them in place. A pacemaker-like device sends a current to the electrodes, apparently interfering with circuits thought to be hyperactive in people with obsessive-compulsive disorder (and also those with severe depression). The current can be turned up, down or off, so deep brain stimulation is adjustable and, to some extent, reversible.

In yet another technique, doctors place the patient in an M.R.I.-like machine that sends beams of radiation into the skull. The beams pass through the brain without causing damage, except at the point where they converge. There they burn out spots of tissue from O.C.D.-related circuits, with similar effects as the other operations.

Carey goes on to talk about the rigorous screening, the risks of surgery, and tells stories of both good and bad outcomes.

Link to interview with Howie Mandel, who wrote a book about his own severe OCD. http://bit.ly/5iMdz4

This type of surgery gives me very negative feelings perhaps because the track record is so poor on psychiatristric brain surgery. In California it is legal to give patients electroconvulsive therapy without their consent, despite the history of memory loss with ECT. I'd hate to see brain surgery get the same green light. My sister's mother-in-law had ECT for depression following the death of her husband and she became a mental "dullard" with poor short term memory and long vacant stares. These new surgeries also have the potential to damage more than help. I am always suspicious of surgeons' motives to do this type of surgery. Ar they tinkerers who just want to fiddle around with peoples' brains and see what happens? Looking for fame? Looking to get rich quick?

Wow. How great would it be if there were surgery for BPD? i know, Axis II disorders can't be "cured"...too much behavior going on there....there isn't even medication specifically for Personality Disorders, just for various symptoms....i would be willing to try surgery at this point.

Not to be a naysayer, but beside the longitudinal studies of patients who had lobotomies in the '50's, what other longitudinal evidence exists that discusses the long-term effects of this particular type of surgery? what are the long-term prognoses for these patients?

I always take these types of articles with many grains of salt, because the NYT will pick up on one media press release or study and just genealize the heck out of it...

Sorry for an off topic comment...wanted Dinah to know that people are spamming with her twitter account, they are doing it in DM's. You may already know, telling you in case arent aware of it.
It doesnt look like she has tweeted in a while or would have posted it there.

Dinah, I can't get to you via email but check your Twitter acct. It may have been hacked, as I just got a DM "from you" and it "asked" if I "was me." It linked to a total phishing scam.

I'm on a Mac using FF and it catches them and warns me when I get these pop ups.

This stuff is really viral so you might know this already, as you no doubt have lots of followers.

If you're not online now, perhaps Roy or Clink can contact you?

Has there been any evidence that ECT may help with Borderline Personality? i could be willing to try that avenue...

When I had ECT I became excessively disinhibited. Be careful of the side effects. There are several and they are real.

HA! I hack your account because you make me wear stupid Halloween bandana! Buy me Versace, ridiculous human person. And bow before me in awe!

Wow. I could use those wires for both the OCD and depression. After all the drugs I've tried for depression, with the Cymbalta almost killing me several times from amping up a part of my brain that did bad things to me, including increasing suicidality, the fact that I'd consider wires in the brain as something halfway decent says something.

Also, my OCD, well, when you've spent a day or two, or three occasionally, trapped for the most part, doing a task that you feel "MUST" be done . . . and in the end it really does nothing to calm down the sense of chaos you feel, for more than a little while . . .

I've talked at times on my blog, in the past, when I was talking more there, about mental health stigma, and trying to show what things are like to lesssen it, but there are only so many things I've been able to show; for one, it IS the internet, and for another, people I KNOW read it, which has been the biggest problem, but the shame I feel related to the OCD, and to a bigger extent, the fear of, they'd think me not competent to have my child with me while my husband works (now that she's older, that's a bit lesser but not very much) . . . . so much fear and shame. So much. So there, on my blog, I've mentioned OCD and talked about it not that often, but when I have it's been about my lighter problems or burdens; nothing about the heavy, secret darkness that I feel inside.

Ironic, that I feel I have to hide, when I try to fight stigma, altho I suppose one need not and, for one's own mental health, it would be good not to, put EVERYTHING out there, because I KNOW I can handle certain things, and certain things I can't. Down the road, if it's been say a long, long while since I've been symptomatic in those ways that I currently, but hopefully will work out the shame through therapy, feel so shameful about, perhaps then I can share some stories to put forth to the world what it's like.

Right now isn't the time for that, at least, now on my blog.

Here, in comments, is a bit different, although not a blog of my own.

Sunny's comment gives me some pause, yet if the studies show that there's more positive than negative . . . . (I'm not one to want ECT though, for the reasons mentioned; my memory is too important to me, as slightly holey as it has become from mental illness and medications).

And I didn't know Dinah had a Twitter account, I thought it was just the other two! I'll have to check out some of the links posted here.

Dear Shrink Rap,
My name is Barbara O’ Brien and my blogging at The Mahablog, Crooks and Liars, AlterNet, and elsewhere on the progressive political and health blogophere has earned me the notoriety of being a panelist at the Yearly Kos Convention and a featured guest blogger at the Take Back America Conference in Washington, DC.

I’m contacting you because I found your site in a prominent health reform blog search and want to tell you about my newest blogging platform —the public concern of health care and its reform. Our shared concerns include health reform, tort reform, public health, safe workplaces, and asbestos contamination.

To increase awareness on these important issues, my goal is to get a resource link on your site or even allow me to provide a guest posting. Please contact me back, I hope to hear from you soon. Drop by our site in the meantime at www.maacenter.org/blog.

I am medine student in Palermo and psychiatric section internal...