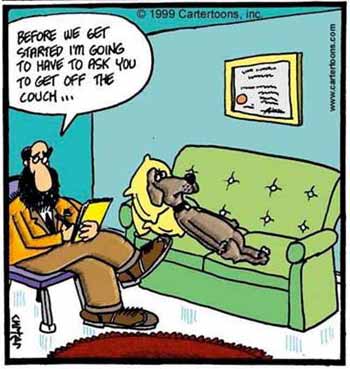 I interrupt this cup of coffee to bring you yet another blog post inspired by an article in this Sunday's New York Times Magazine. This weeks inspirational piece is from The Funny Pages and is called "Celebrity Crazy" by Shalom Auslander. First, let me tell you that this piece won out --for the moment, anyway-- over the magazine story about the severely anorexic teenager, and the Times' ongoing series on diagnostic & treatment issues in severely mentally ill children. Something lighter, I suppose, in honor of the holiday weekend.

So the author seeks psychiatric treatment to deal with his anger issues. He is a reluctant patient and starts his narrative with:

"I'm not doing the couch thing," I said.

The author's therapy was going well, he reports, until the doctor referenced unnamed celebrity clients as examples of patients with similar issues. Mr. Aushlander liked this. "Cool, I thought, I'm as crazy as a rock star." Unfortunately, he began to see his relationship with his doctor in the shadow of this information. If there wasn't an available appointment on the day he wanted, well clearly he wasn't a colorful enough psychotherapy patient; his therapist was holding those hours for celebrities whom he assume had more exciting issues, perhaps even "heroin-fueled sex orgies." Rather than deal with his transferential feelings of neglect (--you'll forgive me here for making an interpretation on a patient I've never examined, I admit this may be a leap), the patient on the page decides to embellish his own life, to make it as interesting as one lived by the stars. When that doesn't gain the desired response from the therapist, the patient quietly decides to leave therapy.

So he's walking out the door when the shrink invites him to a family picnic in the Hamptons. Dinah-the-reader cringes, but okay, go on. Big party, busloads of people. Photos of the shrink on the wall with the celebrities. Poor Mr. Aushlander. But the shrink hugs him and takes him aside, asking that he be The First to read the book manuscript Dr. Shrink has written about one of the celebrities. Ah, Mr. Aushlander is special after all!! Oh, until he sees that the celebrity, not him, is thanked at the end. Oh well.

An amusing tongue-in-cheek tale, but who doesn't want to feel at least a little bit special to their therapist?
Posted by Dinah on Sunday, November 26, 2006

I would think we all want to feel special, to be appreciated, to be cared for. This seems to me to be innate in our species. It is when all of life becomes "you are a thing" that we see the real hurt come out.

I dunno. I think I'd figure that if s/he talks about someone else to me, s/he's not going to be confidential at all, so time for a new therapist!