Inmates are allowed to put in requests to be seen in sick call clinic and these sick call requests are informally known as "kites". Kite language is typically insistent and rather desparate, written across several lines of the form in big block letters with two or three underlines and exclamation points. In spite of how they sound on paper, when I call the guy down he's usually perfectly normal. Or as normal as you get in prison. It's clear that these guys are used to being in places where they have to embellish their problems in order to get seen.

Once in a rare while I get a sick call slip that sounds pretty benign, only to find the inmate has had a severe clinical depression that went untreated for months at the sending facility. It's challenging to know how to triage these referrals when you have to factor in the magnifier-minimizer effect. The exaggeraters are easy to work with but I worry about the stoic tough guys. They're the ones who quietly stay in the background and won't seek help until they're really really desparate. And then they don't want you to know how desparate they are.

The only thing you can really do is work as quickly as you can and see as many as you can so you don't miss somebody who shouldn't be missed, similar to a paramedic working at the scene of a car crash. And to make sure they have a good enough experience talking to you so that when they do have a serious problem sometime down the road they can feel safe getting in touch with you. A good clinical reputation can go a long way.

The best way to find out where you stand with the inmates is through what I call the "hallway quality assurance program". That's where the inmates hangout in the hallway as a group while waiting for an elevator or waiting to move to somewhere else that they're being herded to. You hear the things that inmates say among themselves and get the 'real scoop' about your reputation. It's an oblique version of Questions For The Doctor----it's Comments About The Doctor. Here's what I overhear about my reputation with inmates (all real and unedited, even the negative ones):
Depending upon who you overhear, I'm either "highly intelligent" or a "bullshitter" or both. The "bullshitter" opinions usually come from patients who find out I don't have the same prescribing patterns that they're used to (ie, I actually use modern medications rather than the more sedating antique ones they'd rather get and trade amongst themselves). The true reputation endorsement when a patient tells me, "I told my cellmate I had this problem, and he said I should talk to you. He said you helped him."

That kind of balances out the leg comments. And by the way, it's all muscle. 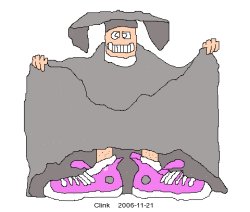 Running shoes, not skates
Posted by ClinkShrink on Tuesday, November 21, 2006

I thought you clinkshrinks had only a limited formulary from which to work, like doxepin and haldol and thorazine and trazodone and prozac?

You're allowed to use modern drugs?

That DOES sound like the ultimate kind of compliment! Er, professional compliment. I'd rather get the one about the legs. Hee hee!

Nice pic. You couldn't wear skates anyway, esp if paperclips are the sharpest thing you can have, and at that, you have to keep an eye on them!

Do they get turkey on turkey day? Do they pass that around for extra triptophan? Cause that's sedating . . .

Happy Thanksgiving! And 10th anniversary to ME, on the same day!

I got to the pic and I just thought: She's finally lost it.

Remember, my kid says no blog talk at the dinner table on Thanksgiving. I guess we could send her to Roy's (You want my kid, Roy?) but they don't watch a movie over there.

Oh and Why are we advertising Grand Rounds? I emailed in 2 posts (One of Roy's by accident, then one of mine) and we were totally dissed. It's always the way with psychiatrists.