It Curbs My Enthusiasm

Okay, I'm not the biggest fan of television, and as I've mentioned, I'm missing that Pop Culture gene. I do, however, know just a little about what is going on out there, compliments of my beloved family. Somehow, I always know how the Red Sox are doing and in my daughter's honor I sometimes watch, but still hate, House-- which I have now confessed to several House-loving patients despite my professed beliefs about the importance of boundaries and keeping ones personal beliefs quiet.

This is all a lead in to my dislike of my husband's favorite TV show: Curb Your Enthusiasm. In case the show isn't bad enough, he TiVo's all the episodes (this allows him to re-run segments over and over) and sometimes rents old seasons. 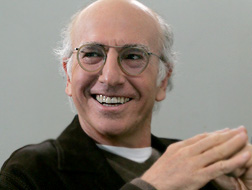 For anyone who hasn't seen it, this HBO show is about Larry David, the creator of Seinfeld, and features him as a misanthopic nebish, who dissects life in a way that makes me cringe. In case your Yiddish is rusty, from YiddishDictionaryOnline.com: Nebish: nebish (American Jewish), a person who is inept, ineffective, shy, dull, a nerd.; a loser .

Okay, so Larry David plays his own character and the character bears his real name, but one has to assume this is a fictionalized version, kind of a Seinfeld-ized view of life. He isn't shy or even dull, but he is inept, a definate social loser. The storyline is about how he continually manages, through an amazing talent for social ineptitude to get himself into one bind after another. His world view is characterized by a cynical spirit tinged with paranoia. His talent for inappropriateness reminds me of someone who floats around the autistic spectrum, and in the middle of conversations, he suddenly focuses on the most inane of details. I don't just dislike the show, I get uncomfortable and even annoyed watching it.

So let's take one episode, or just a fragment of that episode. Larry is trying to get a friend to find him tickets for synagogue for the High Holy days. Normally, he's not religious, but this year he wants to go because he nearly drowned and he decides he was meant to go. Mid-conversation, he starts up a discussion about how the handle on his teacup is too small. Then he decides to leave the party, even though he's brought another couple and they don't want to leave yet. That night in the throes of marital relations, he insists on answering the phone. And finally, upon being honored at Leo's Deli by having a sandwich named after him, he lets Leo know he's displeased because he doesn't like his sandwich: can't Leo give him someone else's sandwich? And when an insulted Leo won't trade his sandwich, Larry says he'll find someone to trade, all while his father is sitting at the table, please with his Larry David sandwich, but in the midst of either choking or having a stroke.

So what's this doing on our Shrink Rap blog? I watch the show and feel like I'm watching a patient, not a comedian. I'm still trying to figure out why it makes me so uneasy. What do you think?
Posted by Dinah on Tuesday, November 07, 2006

To my beloved co-bloggers: Bet you didn't think I could set up a link to YouTube.
--Fondly,
"The Weakest Link" aka "Let's do a videocast of Dinah sync-ing her Palm."

Or like you know what goes on in the brain of people like that, so you can't just simply find it funny (I wouldn't either, it seems to almost be making fun of people like that, by having such a character as the object of the "comedy"; you know, I think that's what makes ME uncomfortable about possibly watching that, after your description).

Then there's Help Me Help You. Some of which I find funny, and some of which I think puts people with disorders and illnesses out there as objects of ridicule. I'm uncomfortable with Inger, not because I'm that socially inept, but I know EXACTLY how it feels to be socially inept, even if it's in different ways than her, and to have it put out there as FUNNY . . . although, part of why I watch the show is to SEE if they are going to show the people making progress, and she did get comfortable giving appropriate hugs this last week, so that's something good, anyway . . .

BUT! and I digress. I cringe at the thought of watching the show called Ugly Betty. Why would I want to watch someone get picked on in much the same way I was my whole life? I've heard it shows people learning to not be so judgemental and to really see the person inside, but, nevertheless, I just can't stand the thought of that show.

I knew you could do it! Dinah the mouse jockey! I'm sending you a virtual High Five.

Larry David looks like a weak imitation of Seinfeld. I don't think he's autistic, just a jerk. At least Seinfeld was sort of an innocent bumbler who at least felt bad when things went wrong---this guy just doesn't care.

My brother loves the show. I just don't get it. Larry David just annoys me.

The analogy to fingernails on the blackboard mentioned earlier is a good one.

Never seen the show, but I bet I know part of why you hate it. In our blogs, we play fictionalized versions of ourselves, where we are funnier, smarter, more outgoing...but still nerds.

And to think I chose family medicine over psychiatry. I clearly have a gift!

I'd never even heard of the show until reading your post. It sounds nasty. I get embarrassed easily and can't imagine I'd ever watch anything like that.

We all, I'm sure, have our shows that disgust us, that push our buttons ...

For me it is Dr. Phil when he is on ANY gendered topic. He always promotes contempt for all males: It disgusts me, it sickens me ....

Our online personalities are usually better and occasionally worse, than our real personalities. This has been noted since the early days online. I remember discussing this factor on the old undernet long before the WWW existed.

The show itself... I like it (but never watch... no HBO or Showtime or whatever). He is a good example of someone with OPD (Obnoxious Personality Disorder).

He was right on with the teacup where you cannot fit your finger in the handle. The opening sequence went a bit long with the going underwater scenes. I found myself hoping he would just drown and get it over with. (Is that wrong?)

And Dinah, okay, you can post a link. Sorry, but, no biggie. Now, embed a Youtube video, and *then* you earn some tech cred.