If Your Doctor Is An Alien 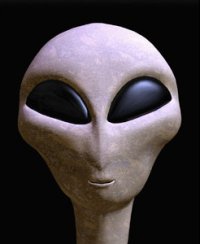 When my brain comes off holiday you will get a serious post. In the meantime, you get this.

I was at the grocery store this afternoon and as I was checking out I saw this week's copy of Weekly World News. The front page had a picture of three bug-eyed monsters dressed in surgical scrubs complete with masks and caps. The title of the story was:

"Your Doctor May Be An Alien"
I can't speak for my fellow bloggers, but I for one am not an alien. Not that I have anything particular against aliens---I would never require proof of terrestrial origin when hiring someone, nor would I support the idea of building a fence around Earth to keep them out. (After all, we're getting blown up to make way for an intergalactic highway anyway.)

But it did get me thinking about Harvard psychiatrist Dr. John Mack. Although not definitively an extraterrestrial himself, he did write books about alien abductees (now available used on Amazon.com for forty cents). He interviewed many people who claimed to have been abducted by aliens and found that they had experiences in common like being subjected to medical experiments or being forced to breed with aliens. He used hypnosis to regress the abductees and enhance their memories of what happened.

It's interesting to see the parallels between the alien abductee phenomenon and people purported to have multiple personality disorder back in the 1980's. (The abductee phenomenon was a bit later, with Mack's books published in the 1990's.) MPD patients sought treatment for trauma related to organized Satanic ritual abuse. They were treated by therapists who used hypnosis to enhance memory and often reported being forced to breed by cult members. They referred to themselves as cult "brood mares". (I always wondered why no one was ever groomed to be the Satanic cult treasurer.)

I don't know how many of these therapists accepted the trauma history as literal truth and how many used the abductee/Satanic abuse schema as a metaphor in treatment; the more important question is the validity of the treatment that was provided. Alien or not, patients deserve treatment that is not out-of-this-world.
Posted by ClinkShrink on Saturday, November 25, 2006

technically, the same treatments ARE used in both. Group therapy and hypnosis to increase or bring out memories are the popular ones... I guess it wouldn't be a far fetch to assume that both parties have self induced psychosis - that is to say, that they weren't in fact abducted by aliens or ARE actually possessed...

no idea where i'm going with this comment... nice blog

Actually, I may be an Alien.

So that's why my stomach was bursting last Thursday. I thought it was the turkey.

That might explain the pasty complexion and dead eyes of a physician I saw recently...

I'm not technically an alien. Technically, mind you. I do feel somewhat away from my home planet most of the time.

I think I might enjoy speaking to an alien for a change. Could beat a lot of practitioners I've had in the past. And they might be on to something that we're not you know.

Not the borg though. We have enough unhealthy assimilation already on earth.

This is an interesting flip to the sometimes idea that our patients are aliens.

I've not had a patient who truly felt like she was an alien - alienated, maybe.

Which makes me think of that Kevin Spacey (ironic) movie, K-PAX, where he is an alien/patient with a severe trauma to uncover. This is a very good movie -- worth seeing, if you haven't.

And, of course, psychiatrists used to be referred to as "alienists".

I absolutely LOVE K-PAX! I discovered it earlier this year . . .

It's a long movie, but good; although I did cringe at the boundary thing of inviting the guy to the family BBQ.

That's another psychiatrist portrayal, a positive though imperfect one, that would go well on the media thread. Heck, he FLIES somewhere to find out stuff. Although he IS distant from his wife and family, at the beginning.

And I LOVE how the director left it up to the audience/viewer to decide what they thought . . .

I read this book, "Hystories," which compared and contrasted a whole host of (Western) cultural/psychological phenomena, including DID and alien abduction. I disagreed with the author's interpretations of chronic fatigue syndrome and Gulf War syndrome as being part of the same general category, but the parallels are indeed interesting.

(By the way, I should mention that I'm actually an intergalactic gerbil bot. Resistance is futile.)

All your base are belong to us.